The Language of the People 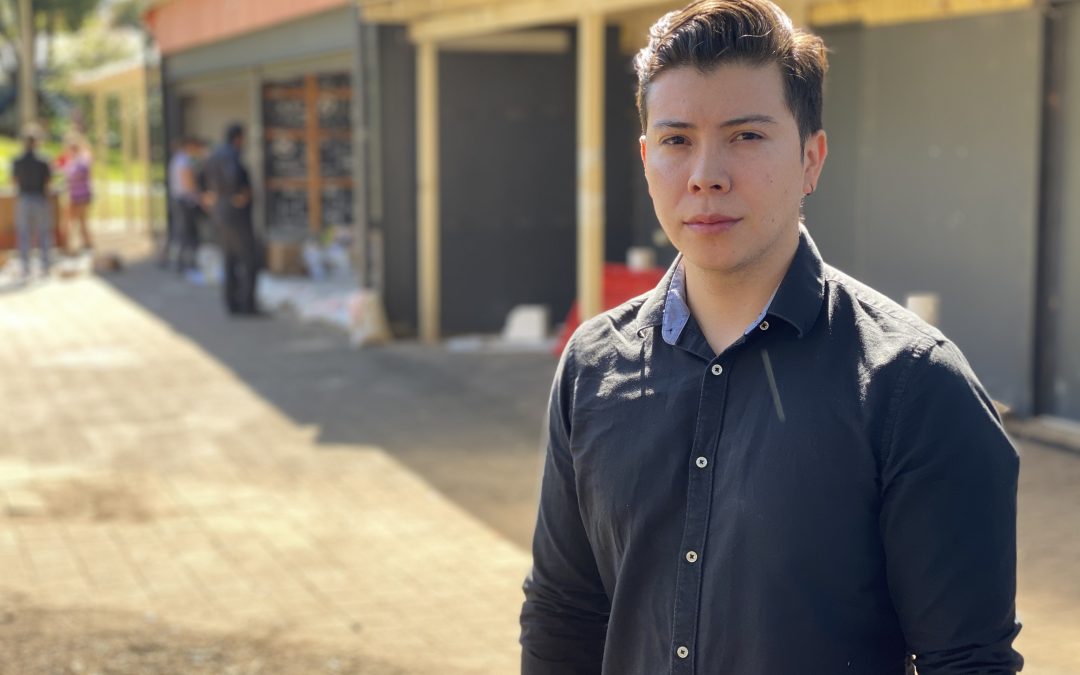 On buses and trains. By pushbike. On foot. They all come. Some who can speak English quite well. Others who look less sure, dependent on a friend to speak for them.

Andres is a volunteer for United For Colombia, a not for profit organisation that he says “is designed to help students and the Colombian community here in Australia in this type of situation”.

‘This type of situation’ being the COVID-19 crisis and how it is affecting the international student population in the most troubling ways. Migrant workers on temporary visas are not eligible for the COVID-19 crisis wage subsidy, a decision that affects over a million people. Many of them are students who have come here to study, working part time to support themselves. They are excluded from unemployment benefits of any kind: neither job keepers or seekers; suddenly  cast adrift in our world as unemployed exiles.

In spite of this, Andres is, by his own account, doing okay. He set up his own business here hiring out e-bikes, cushioning himself against the difficulties for now. One thing he has been trying to do personally is supply students with bicycles so they can become delivery riders. “It’s tough, but it’s one of the only jobs you can get, and at least students can then pay the rent if they have the work.”

Andres is in the middle of doing his Masters of Business in Information Systems. It does not take long before you understand what a resilient and organised individual he is. Qualities that make him a major asset for United for Colombia.

While we speak, a group of about 50 Colombian students filter in to meet with the Addison Road Community Organisation in Marrickville. They’ve been told Addi Road has been putting together emergency food hampers and is operating a food relief hub from its grounds.

By the time the day is finished, over 150 Latin American students will have come here seeking these emergency food hampers. Despite its name, United for Colombia is becoming a broad communication point for students from all over Latin America who suddenly find themselves adrift and in need here in Sydney.

Addi Road CEO Rosanna Barbero says these Latin American students “just don’t know what to do. They’re not the kind of people that are used to asking for help, or know how to ask. They’ve come here paying huge student fees; they’ve been here working hard and paying taxes. Educational institutions have relied on them; the economy has benefited. And now they are trouble. It’s just criminal how we are treating them.” 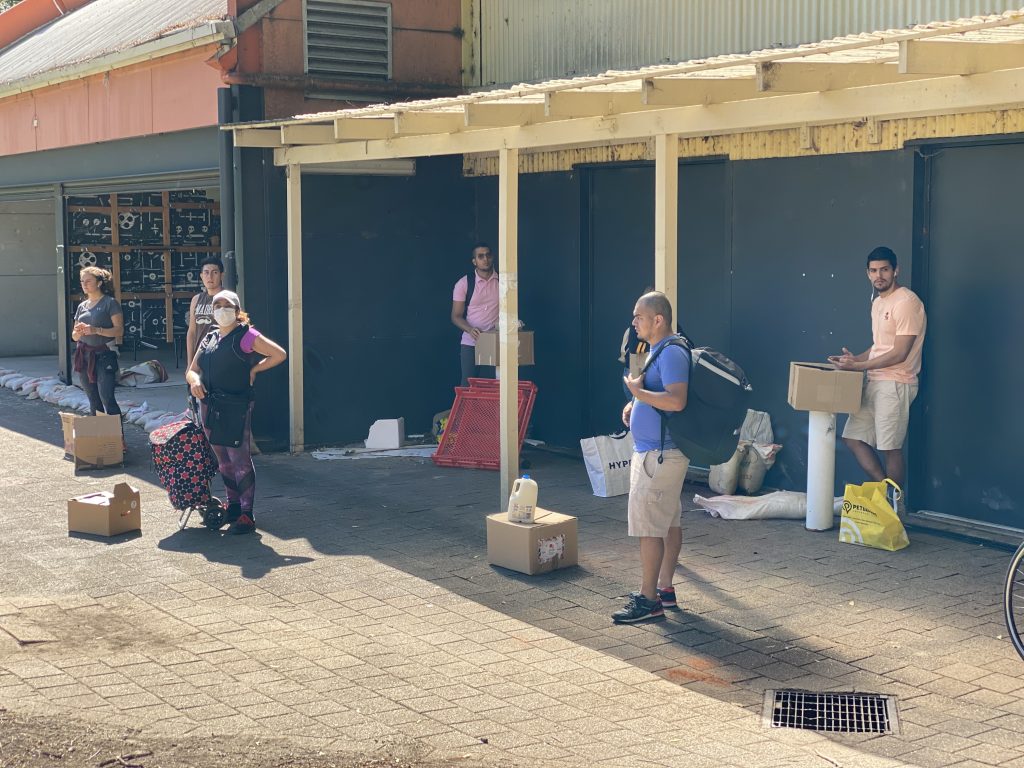 It was only a few days ago, right in the middle of Easter, that a note was received by Addi Road, communicated through a Volunteer Form that was filled out and processed through our automated online delivery system. The person who contacted Addi Road did not know of any other way to reach out to us. The form simply gave us a few details and said, “We need help. We’re desperate.”

An alliance between United for Colombia and Addison Road Community Organisation was quickly developed. The students today come from all over the city: Newtown, Campsie, Canterbury, Wolli Creek, Homebush… as they roll in you feel that slightly disturbing sense of something hidden emerging into the light.

Andres explains the struggles students are going through just to have enough to eat. “Sometimes have to decide which we prioritize: paying our school fees, or paying our rent and buying food? Many just do not know what to do. The Prime Minister [of Australia] says if you don’t have the resources to survive, please go back home. But the borders are closed. We can’t go home, even if we had the money to do so.”

“We’re trying to get what support we can for the students. Most of them have lost their jobs overnight. Most of them were working in hospitality. Others had cleaning jobs. Some of the schools they study at are being flexible to try and help us: stopping classes, postponing fees, offering extensions for payments. But if students still have to pay three thousand dollars in fees in three month’s time, the truth is many of them won’t have that money because they don’t have a job.”

“There is harassment going on too, some very threatening behaviour from schools. Students feel very divided and worried. Should I pay my college fees so I can stay here; or should I just pay my rent and get food and be a survivor?”

“You have to understand that a student’s visa is dependent on their capacity to pay the school they are studying at. If you don’t pay your fees, students are being told their COE (Confirmation of Enrolment) will be cancelled. Subsequently, that means they will be kicked out. And they will have a stained record that affects their ability to ever come back here and finish their study, or travel anywhere else too.”

Andres feels the seriousness of what is happening. His restraint in describing it suggests much darker clouds. “There’s a lot of anxiety,” he says. “A lot of depression.”

United for Colombia is one of a number of Latin American student groups trying to negotiate with ASQU (Australian Skills Quality Authority) and TEQSA (Tertiary Education Quality and Standards Agency). These are the regulatory bodies who oversee, respectively, the schools that offer vocational and training courses, and the universities and private colleges concerned with higher education.

Andres says United for Colombia is lobbying these organisations intensely. “We’re asking them to freeze payments, and to freeze the courses, until the COVID-19 situation passes. The contracts students signed for their courses were for face-to-face English language classes. The best way for them to learn. Now it is all happening online instead. We know that this cannot be helped, it is the virus. But only a few colleges are willing to reduce their fees with this change in their teaching.”

“Many students,” he says, “dreamed of coming here to learn English and study. They sold their cars or what they had of value to get here, or spent 5 years working and saving. We know it is no one’s fault what is happening now. But it is not right to charge full fees for what are now online courses. We even have reports of courses in hairdressing and carpentry going ahead, and students at home being taught online.”

He shakes his head at how brazen this kind of thing is. But Andres is at pains to repeat, “We don’t blame the government. So many things are involved. So many consequences. We just need them to listen to us and make corrective actions that are fair.”

More immediately, Andres is worried about how Latin American students can maintain a roof over their heads and eat at all. Which is why he is here today to help develop even stronger connections between United for Colombia and the Addison Road Community Organisation.

The students that lined up for their emergency food hampers, gather around Andres, hearing him speak, asking him questions, seeking his reassurance and advice.

Afterwards, Andres admits in private that “the problem is bigger than I thought. Especially the anxiety. We have received 200 enquiries this last week. Which means there are many more. The 200 are only the ones who have raised their hand to say, ‘I need help’. Many more are too shy or feel vulnerable, and nobody likes to reveal they are vulnerable.”

Andres takes heart in his faith. He explains that the majority of the Colombian students are Catholic; the rest are Christian, meaning Evangelical. “Faith helps a lot to keep people optimistic,” he says. “The belief that everything will get better.”

He smiles. Describes himself as “blessed”. ”Colombian people are optimistic people naturally,” Andres says proudly. “We try to see the good in every situation. It’s something in the culture, something we were raised with through our parents.”

Coming here today to get the Emergency Food Hampers from the Addison Road Community Organisation is not just about the food, though that is nice and certainly helpful. Andres looks at all the students that keep on arriving thanks to  United for Colombia spreading the word on Addi Road. The students will keep on sharing the information. They will help one another get their food home. Many are here to get food for their entire households.

Andres does not like them to appear entirely powerless. What’s happening here, now, is almost the opposite of that. “We see somebody who needs help and we try to help them. This is why we are a very strong community.” He looks at everybody around him with their boxes of food. “It is what makes us a community.”

Please consider donating to the Addison Road Community Organisation and our emergency food relief program. Donations can be made here: https://addiroad.org.au/donations/donate-now/ 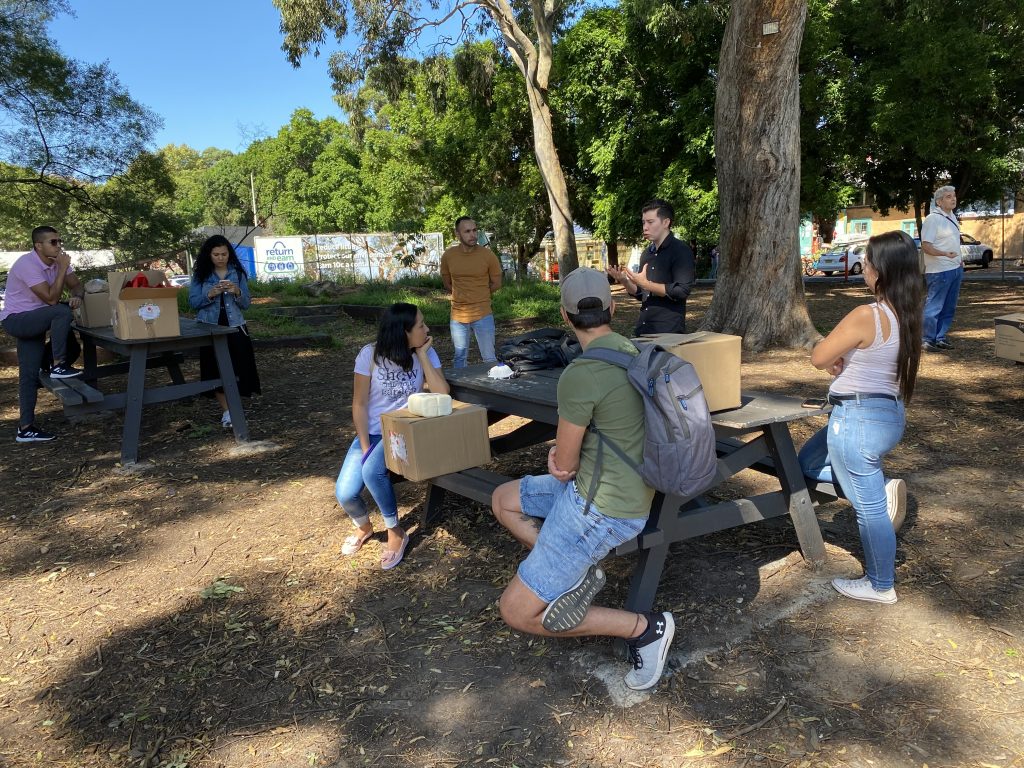 Andres Puerto of United for Colombia speaks to Latin American students in need at Addi Road.