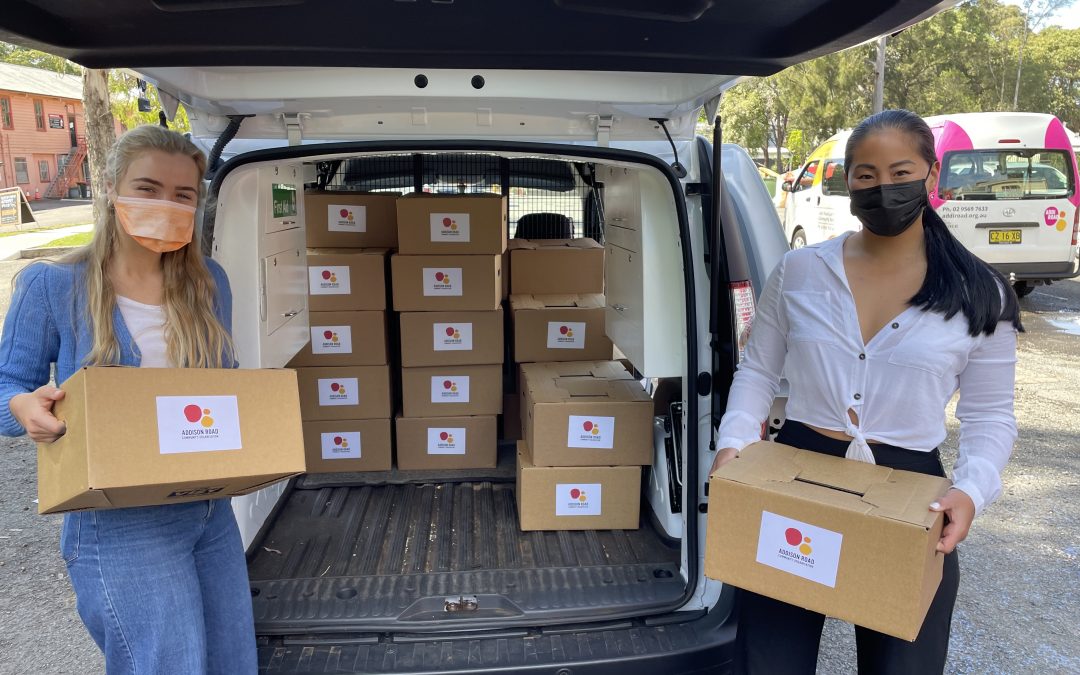 Kim and Hannah are here from Junction Neighbourhood Centre (JNC) filling up a van load of hampers at the Addi Road Food Relief Hub. Both of them have seen a lot with COVID-19 and its impact in the community. It might seem hard to equate their brightness with the work that they do, but just talking to them gives you all the reasons you need to understand why they are so positive about what they do.

A social work student from the University of Sydney, Kim has been volunteering with JNC for the last three months. Her working partner Hannah is trained in mental health and counselling therapy. Hannah was employed by JNC to work in aged care just as the first lockdown in Sydney began happening last year.

They explain that Junction Neighbourhood Centre is a not-for-profit organisation based in Maroubra, with two other locations in Glebe and Bondi. It provides all kinds of services and programs, covering the eastern suburbs and a lot of city too, with an agenda to strengthen community feeling. In practice this means dealing not only with the elderly, but also victims of domestic violence, single parents battling to make ends meet and all kinds of families in need.

Kim and Hannah say that along with their office locations, JNC has established two pop-up distribution hubs for the Addi Road hampers at a social housing spot in Coogee and another called Namatjira in Chifley. It’s been quite a task, but as part of the JNC team the two of them seem more appreciative than anything else to be part of what the organisation is doing and how they have been able to work with Addi Road. 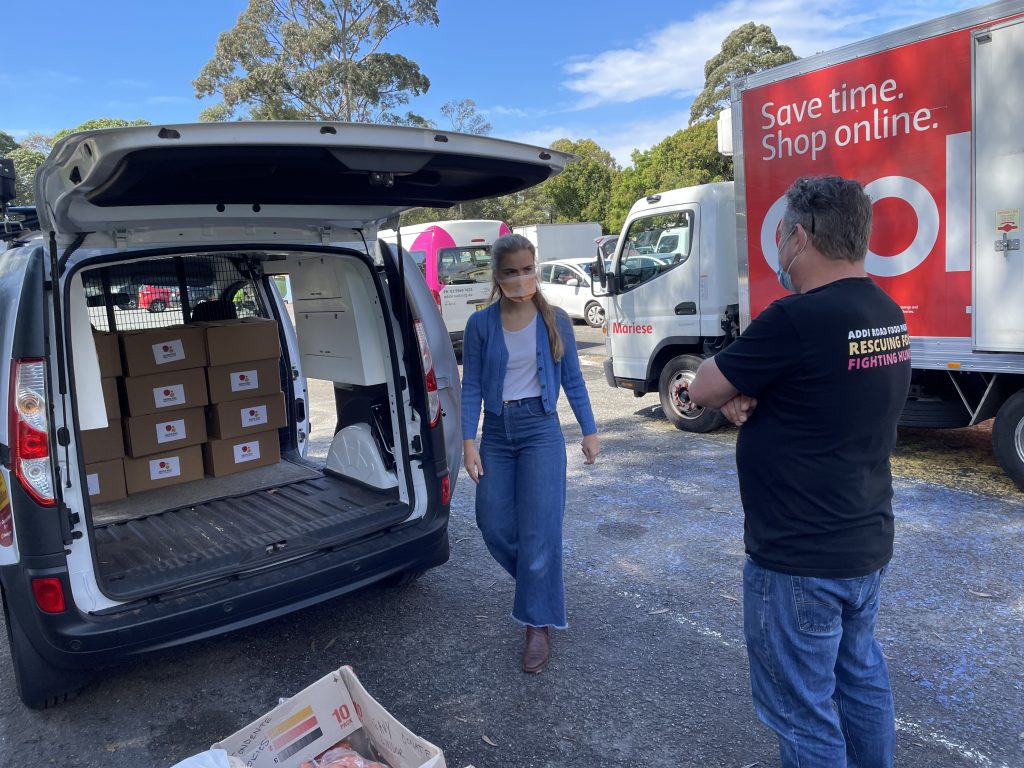 Hannah says that “working in aged care I feel like my contribution matters and is appreciated. It’s something that is really wanted. Honestly, I just love it. I still deal with mental health, depression, anxiety, PTSD, all these issues I have training in, but there’s a beautiful balance with a more positive side of things as well. And to be able to bring food to people right now when they need it, it’s an amazing thing.”

“The gratitude you receive is very rewarding. It really goes into having a good relationship with people, no matter what their age is or their circumstances, and no matter what you’re doing. The respect that inspires in you is quite special,” Hannah says. “And the thankfulness I feel, just to have a rewarding job like this when so many other people are trying to find work.”

With only a few months experience you’d think Kim was meanwhile pretty fresh to it all, but Hannah indicates her working partner knows plenty. Kim explains that it was actually her mother – a drug and alcohol counsellor by profession – who inspired her to go into social work.

“Even if we were out shopping she’d always make time to stop and talk to the homeless. Everything mum did made me aware of how privileged I was – and how doing something that was that was about growing the world and helping people could also be self-satisfying and beautiful.”

As if a lightbulb has gone off, Kim says “Oh I have this phrase I tell people to explain it: ‘Where there is much given, there is much expected.’ I know I have been given a lot. So what I do can only be expected. I’m very aware of that. And it feels right.”

Their van is almost packed and Kim and Hannah are getting ready to go. They will deliver the Addi Road hampers to their offices and their food hubs, as well as to people’s homes and various apartment blocks.

Kim says “the personal deliveries are the hardest part”. It’s an effort, sure, driving all over the place all day long. But the real difficulty is that “it shows you a much bigger problem going on. And that the problem was happening before Covid. It’s something systemic.”

“You see people running at the thought of free food. The more we do, the more we realise it’s much bigger than you can imagine. Some of the issues we deal with in people’s lives are inter-generational; some are self-inflicted but that doesn’t mean you don’t help. But the hard reality of their lives, the poverty and inequality, that stuff was there before the pandemic and Covid has only heightened it.”

Hannah chips in with a story about a young mother and her two kids who they delivered food to just the other day. She was poor and too frightened to go out. It’s not an especially dramatic tale but it means a lot to Hannah and Kim. The feeling behind it.

Kim says “there are lots of situations like that we experience. When we do the hubs or our drop-offs for food, you get people who almost yell ‘thank you’,” she says, laughing a little. “We receive so much joy. We’re very lucky to feel that and be a part of it. We get given so much in those moments.” 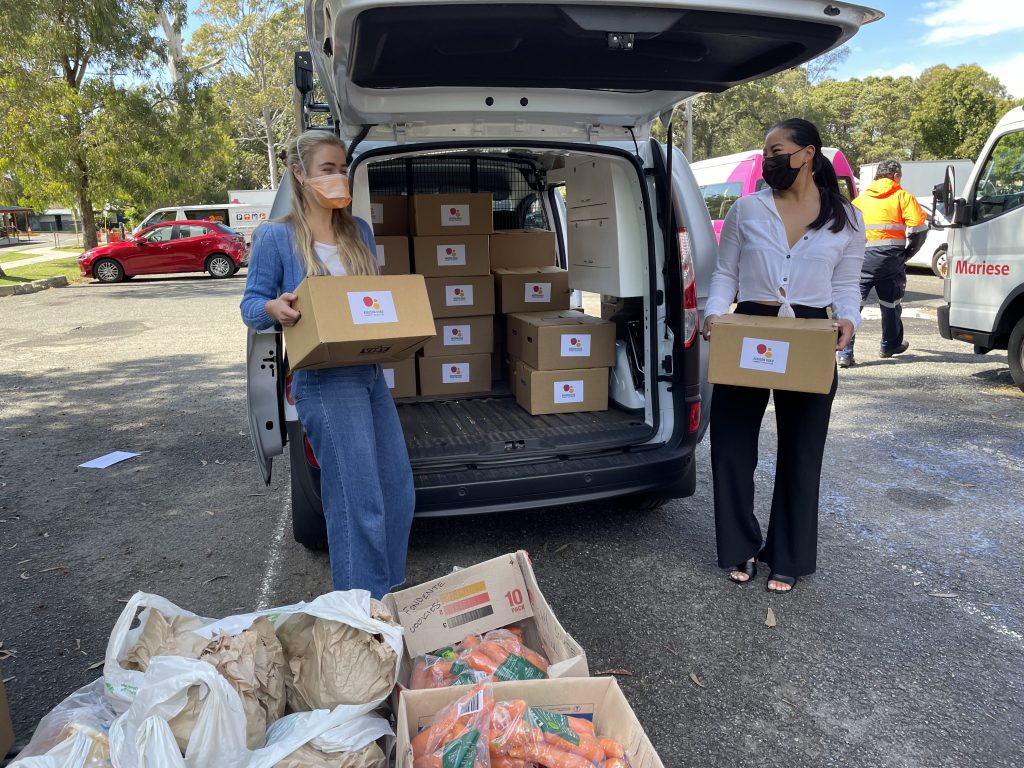