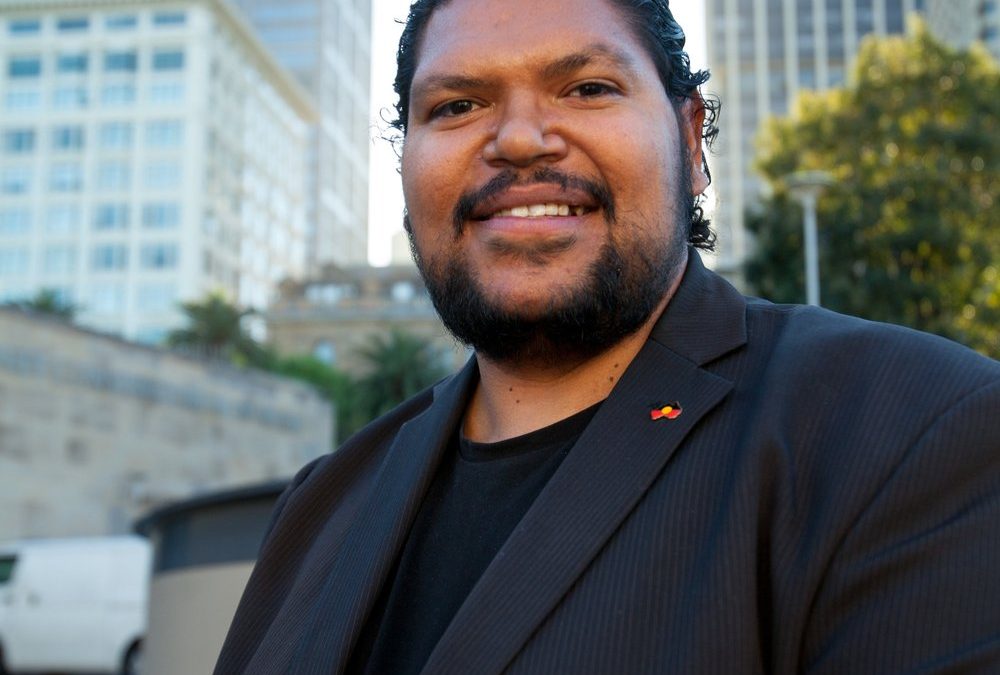 Splotches of rain hit the page and the birds in the trees above me start shouting. Big storm is coming. You can smell it in the air.

Talking to Warren Roberts of YARN makes for a similarly charged 15-minute interview. All the time I feel like I might break on through to the other side of something, but I never quite do. It’s more like a promise, the start of something. Fifteen minutes on a telephone … sitting here on a bench opposite Gumbramorra Hall inside the grounds of the Addison Road Community Centre in Marrickville figuring out what deep conversations can mean.

A Thunghutti and Bundjalung man , Warren got the idea for YARN way back in 2007 when he was studying at university of NSW. The students in his class had plenty of well-meaning ideas. Warren saw there was an opportunity to build a more intentional dialogue and connection between Aboriginal & Torres Strait Islanders and Non-Indigenous Australians . He told his classmates “let’s go outside, have a coffee and have a yarn”. A light went off in his mind. And things got rolling from there.

YARN Australia is a social enterprise that would steadily spread itself across universities and educational institutions nationwide, “breaking down the divide” and “providing safe spaces to begin building relationships between Aboriginal and Torres Strait Islander and non-indigenous peoples at universities”.

It’s grown and grown. Beyond the education sector, beyond its generational beginnings, to include all kinds of people and ages in the simplest, yet most profound of processes: a group of people sitting in a circle “talking and sharing their stories”.

Warren sounds stronger and more focussed by the minute as he speaks about it all. “There’s a lot of things going on in Australia. But we’re mostly doing it in silos and not doing it together. I set up YARN to end the silos and bring Aboriginal & Torres Strait Islander and non-indigenous people together in a culturally safe place.” He stops for a moment then makes an observation, “You know, when humans get together they often find they have many of the same things in common. It’s like my grandmother used to say to me, ‘It’s when we stop talking that we create more problems.’”

Elements of guilt, fear, and an uneasy feeling of distance and the unknown are all things to be overcome from the point of view of non-indigenous Australians when entering a yarning circle. But Warren does not carry the burden of that or even think too much of it. “The way I look at it, there are opportunities to build relationships, but the guilt and shame are getting in the road. People don’t realise how simple the thing is. How much we need to build relationships first. We can’t just start by talking about past injustices. How do you even talk about history or injustices without any relationship? It can’t happen.”

“All this talk about a Treaty or changing the date for Australia Day, all this stuff with people asking if we are ever going to get to the future. Well, we are here, now, in the present. Let’s forget about all the pie-in-the-sky stuff, the ‘goodwill’ thing, because unless we have a relationship how can we build any understanding for what is going on. How can anyone, anyone, sit back and have an understanding of someone else’s character and world without having a relationship with them first?”

“What stories, then, are we talking about sharing at YARN? Well, your own story. We don’t start with giving you a history lesson. What for? Why do that? In your own big story there is a whole bunch of stories that will matter: stories of sadness, happiness, joy, passion, triumph … we know those kind of stories. We all have them.

“How can we even begin to say we are multicultural and inclusive when we don’t even know each other. It’s like when I get invited on to the radio to talk about ‘change the date’ and the interviewer asks me, ‘What’s the solution to this Warren?’. And I say, ‘well, the solution is having a yarn’.

“Look, imagine if you put a bunch of builders in a space. And you said, okay, I want you to build my dream home. But I am not giving you any plans and the builders are not allowed to talk to one another, communication is fundamental to everything. Aboriginal people might have a relationship to the date, but to the rest it’s just a holiday. Having a relationship is what helps you understand it differently.”

Warren says if he could achieve anything with YARN and his work in the circles of storytelling and sharing that he runs, “I would just ask Australia to take it slow. It might be 12 months, two years, five years … it takes times to build a relationship”

“Imagine if I went over to your grandma’s place and I said ‘I know your Mark, he’s a good fella, tell me all about your family history, culture and your stories.’ They’d tell me to get lost!”

“So, we are people,” Warren says emphatically. “Slow down the process. And get to know us. Australians are so passionate about progress and solving problems. Straight away they say ‘let’s find a solution’. They’re very solution-oriented. Projects, actions and to do lists. But they are not very relationship oriented.”

Those who come along and attend YARN events are often surprised by the steady, slow build of the conversations and how much they are asked to share. For Warren, the inspiration is right there in that process and the time it takes. “What I am saying in all this is that I am inspired by Australians who are willing and happy to sit there in their discomfit, to sit in tension, and just share a yarn about who they are.”

“It’s all about storytelling and sharing,” Warren says, finishing up our conversation just as the sky finally breaks and it begins to rain. Certain words I am writing threaten to turn into clouds as drops of water hit them. I better go. Warren ends things this way. “We don’t have a written culture, we have a visual and verbal culture. We want to create a more relational culture based on that. We believe everybody has a story. We believe the birds have got a story, the trees have got a story, the rivers and mountains have got a story. Let’s share the stories that we have.”