#RACISMNOTWELCOME street signs to be erected across Sydney’s Inner West 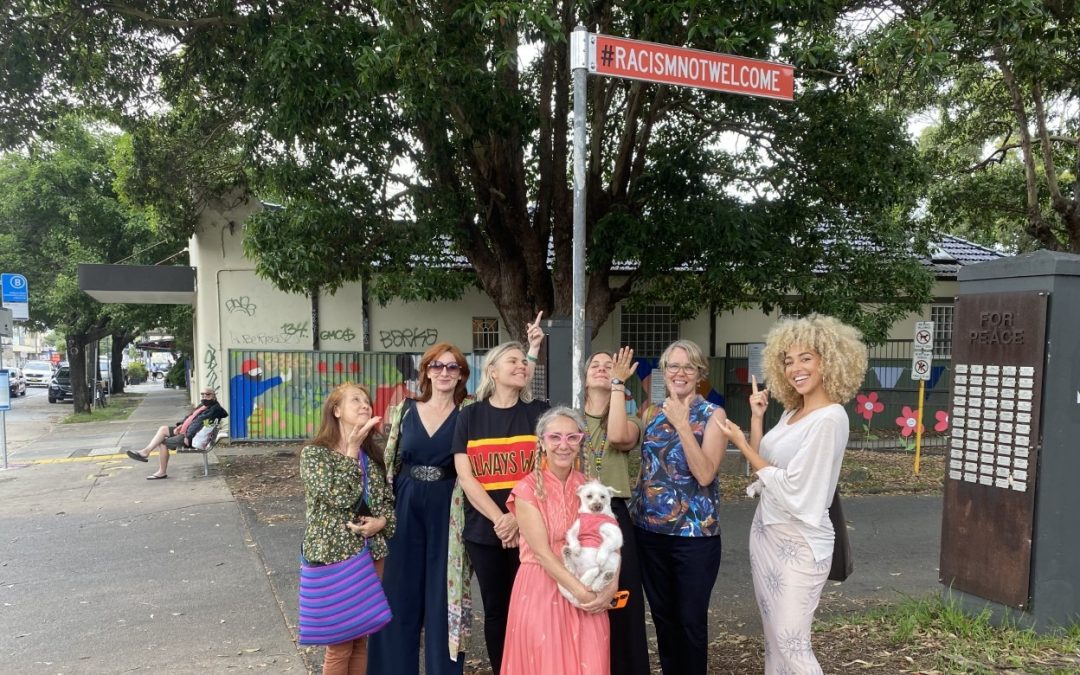 As of today, street signs declaring #RacismNotWelcome are being erected at key locations across Sydney’s Inner West.

Inner West Multicultural Network (IWMN) is an independent network of government and non-government service providers and organisations that works with, advocates for, and supports people from multicultural communities to achieve a just and equal society. Addison Road Community Organisation (Addi Road) plays a leading role in the IWMN.

Last November, independent Councillor Pauline Lockie brought a motion to Inner West Council to secure its endorsement of the #RacismNotWelcome campaign,  with the street signs as a major element in raising community awareness and involvement in tackling racism.

Other elements of the campaign will include a video, an art exhibition with an anti-racism theme, stickers and signs for businesses, and a major community event revolving around the International Day for the Elimination of Racial Discrimination on March 21st      .

The Inner West Multicultural Network developed the #RacismNotWelcome campaign in response to a worrying increase in racist attacks in our community during 2020. There is research-based evidence for this rise in racism, including the ‘I Am Not Virus’ report from the Asian-Australian Alliance documenting 377 incidents between April and June, 2020 alone.

Thanks to their contribution – and that of many others – the motion was successfully carried,      and #RacismNotWelcome street signs are now being installed. It’s worth hearing directly from these speakers to get a genuine sense of the importance of the #RacismNotWelcome campaign.

We believe what we are doing in the Inner West will be a source of inspiration to people all over Australia and the world. We are already seeing similar moves in across the country, as our fellow advocates and activists lobby their local councils to join us in a grassroots community campaign that declares #RacismNotWelcome in Australia.

Dr Julianna Jamaluddin, Addi Road Director: “Systemic racism is embedded in every fibre of our society. Too many Australians and sadly many within this LGA bear the brunt of it in our everyday lives. The troubling rise of far-right nationalism both overseas and here, as well as the more insidious forms of racism, continues to rear its ugly head again and again. This year, in Australia, the COVID-19 pandemic has seen Asians targeted in particular as documented in the report ‘I Am Not A Virus’ by Osmund Chiu … Will a street sign change all of this? No. But what it does do is start a conversation. It tells those who are emboldened to act in racist way that racism Is NOT welcome in the Inner West and subsequently throughout Australia. It encourages ally-ship and bystander action; it allows for difficult conversations to happen.

Kween G (Gladys Namokoyi), Addi Road Director: My four-year old daughter started pre-school at a centre in Marrickville last year. She was so excited to make friends, to learn, and to have educators to support her. When I picked her up from her first day, I asked her, ‘How was school?’ She said some girls told her that she couldn’t play with them because she’s brown. She told me she wants to be white so that other children can like her. I still have the conversations with her. But I can’t be the only one teaching my daughter about racism and how to defend herself. She had been denied the justice she deserves, but yesterday when she stood in from of the ‘Racism Not Welcome’ sign and took a picture with a big smile I felt that she got the justice she deserved.

Craig Foster, Addi Road Ambassador: Why must we act to install these #RacismNotWelcome signs across the Inner West? Because as worthwhile as prominent national campaigns are, racism is not fought through our television sets or mobile phones, it’s eradicated in every local street, every local cafe, every community park, every local library. And a fair and equal life for all is built, conversation by conversation, in our buses, not on them, in our local businesses, not on their poster walls, in every interaction that we have at a local level … [As] the great Mahatma Gandhi said, ‘we must be the change that we wish to see in the world.’

Pauline Lockie, Councillor, Inner West Council: As some of you know, I am an Asian Australian British person. I came to Australia as a baby in the late ‘70s after being born in Indonesia, where my mum is from, and where she and my Australian dad had met. That was just a few years after the White Australia policy had been rolled back. And while some parts of Australia, like here in the Inner West, were already very multicultural, the area my parents moved to on the Central Coast was not. And, to this day, the legacy of growing up as one of the only brown kids there is that I don’t speak Indonesian; I don’t feel any real connection to the culture; I don’t have anything of that part of myself to pass down to my daughter, because as a child, I didn’t want it. I experienced so much racist abuse and ignorance growing up that all I wanted was to not be different. I would go to sleep at night wishing I would wake up in the morning as a little kid with white skin and blonde hair and blue eyes because I thought that was how everyone was supposed to look. And it actually kind of broke me a bit to hear Kween G talk about how her daughter, at the age of four, is feeling the same way … I know the colour of my skin and my mixed heritage is a gift. But you don’t ever get over feeling like your own country doesn’t want you and you don’t belong anywhere. And that, of course, has very real and very dangerous consequences for people of colour all across Australia to this day.

Councillor Sam Iskander, Inner West Council: I was a wog. This was what was said to me when I first arrived in Australia forty years ago. Since then, even when I was the Mayor of Marrickville, delivering the most advanced multicultural activities and programs, as a mayor I was really subject to racist comments … I am Lebanese … I was very, very proud to say I am an Australian, I am in Australia – but I am from that background, and I was encouraged to be a leader in my community … We did a lot to really face racism [when I was Mayor] and have some achievements on that. All that I am going to say, very honestly, is that we did very well, but we still need to do more and more – and more. Especially when, in America, it was very clear that the racist strategy to win the election was done very badly by Mr Trump. And thank God he lost the election. Now, that bad blood has started to move in Australia …  And we have seen it in the street, in the Inner West … I talk from my heart, because I do believe we should get together and support this new move … and we have to be very proud that we always take the advantage to show that we are a multicultural area.

YOU can hear complete recordings of speeches in support of the #RACISMNOTWELCOME campaign here.