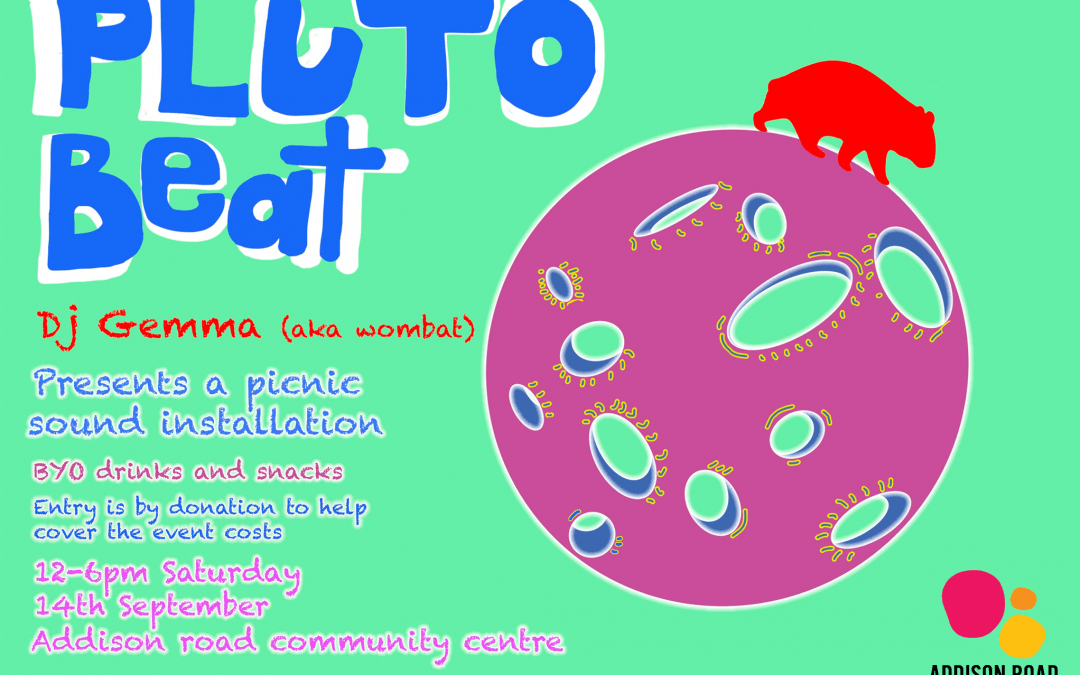 This Saturday afternoon (14th September) from 12-6pm, Addison Road Community Organisation and Pluto Beat are presenting a picnic sound installation across the green around Gumbramorra Hall.

It’s BYO drinks and snacks, but we will also have handmade Queen of Cups Chai tea available – and maybe other treats too. You might want to bring yourselves a rug. We’ll supply some bean bags and a few beautiful carpets to sit on as well.

Pluto Beat’s DJ Gemma (aka Wombat) is best known for her work with Club Kooky. She says Pluto Beat will be very different to that environment, and much more of chance of relax and talk, with her playing “chilled music”. Then she laughs. “It’s a bit of a problem describing the music for Pluto Beat. Chilled makes it sound like we are in Bondi.”

“The music will be deeper than that word ‘chilled’. Maybe don’t use that word. People will be able to sit under the trees and listen to music and still talk. It’s really about these soundscapes that I am creating. And they can be deep and dark. I don’t like to name the music at all. Because it is a soundscape – and I am mixing and layering different tracks to create it. I’d like to leave it open as to what I play and what it is.”

“Look,” she says, “the reason why I am doing Pluto Beat is that the world, through my eyes, feels like it’s about to fall on its head. People are feeling a bit lost; and they are wondering just how to ‘be’ in this world when the planet is burning.

“There’s an anxiousness in the air. I don’t really know how to name the feeling. It’s not so much a personal anxiety, more a feeling from around the planet and for the planet. And with it a need for people to get together and get to know each other.”

“My motto is if you connect with what we’re doing then you’re a part of it. It’s as simple as that really. It’s so full-on out there. This is my free gift.”

NOTE:  Entry is free on the day – but Pluto Beat are asking for donations from anyone able to contribute to help cover expenses and the cost of the sound-system.