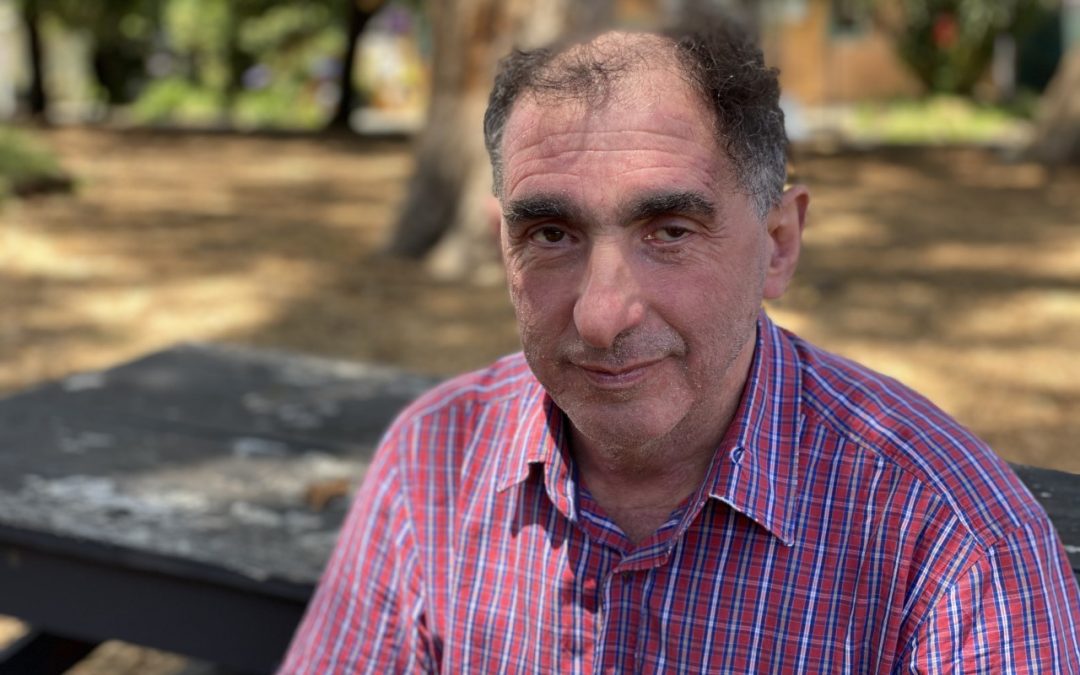 Matthew starts making Christmas cards in November. He creates them by hand and sends them off to friends across the country and overseas. Heading into December he’s usually finished all of them. “I do it to make this time of year less lonely,” he says. But when he is done things can feel a little empty and the space Matthew senses begins to grow again. Christmas. A special time. But also not always the easiest of times for some.

Things changed this year for Matthew back in March when Covid-19 started to have an impact on life in Sydney. People started working from home, he says. An employee of the Public Service Commission, the idea of long hours at home did not appeal to him. “I live by myself. I don’t have any family anymore .… I have friends. But my friends were all affected in the same kind of ways, and self-isolating. I did get a bit low.”

Matthew worked in the office at Addi Road at first, helping out with organising our volunteers. Then he moved over to assisting at our Food Pantry Marrickville and, before too long, inside Gumbramorra Hall, which had been repurposed as a Food Relief Hub in order to meet people’s needs during the Covid-19 crisis. As the weeks passed by, Addi Road began radically stepping up its activities, supplying emergency food hampers to what would add up to over 70 different charity and community organisations operating across the city.

“But it’s like what Roz says, there is more to it than the hampers. We’re helping them, and we’re helping one another. We’re bringing people together. Helping people has different meanings to different people,” Matthew says sagely. “It helped me just to be here or I would have spent a lot more time alone.”

Matthew has unusual memories of this year that please him. He likes the way “you can have a joke and a laugh at Addi Road . It’s convivial. And you certainly learn how to move and lift a great many things,” he adds with a laugh. “I can remember being with Miles, sorting broccoli. The smell was bad. I called it The Miles High Club. It’s because of the way broccoli is packed and snap-frozen by the big food suppliers. The bottom layer sits in ice, and when it melts it starts to rot very quickly. So to save perfectly good food you have a very short turn-around time, especially if temperatures are high. We spent a lot of time sorting the good from the bad. We saved a lot of good broccoli, Miles and I.”

Another hard working day involved repackaging all the grains and cereals that had come in into usable 1 kilo bags. Matthew indicates it was physically demanding work, but he has a joke. “I called us The Cereal Killers. So I got another pun out of that day.”

One of Matthew’s big interests is paleontology. He thinks the interest came from his father, who was an army pilot in the 1960s in the UK. His dad did a lot of low-level flying and aerial photography of old sites. “Anyway, because of that, Dad got me interested in archeology, in rocks. On the other side, he influenced my sister Caroline. She became a photographer and ended up working for magazines like Vogue.”

Matthew took the interest in archeology a step further into paleontology which, he explains, “is more about fossils and past environments and animal life. I could write a book on it and drive everyone nuts. I love it. It’s just all the details in it that appeal to me. A lot of details. It gives you an encyclopedia brain. And that which you learn, you can apply to the world about us now and everywhere.”

He points out how a passion for volcanoes, for example, can be useful to understanding other things today. “They talk about eruptions, stories like Pompei. The volcanic ash. The key word is ‘ash’. Ash is what generates the heat. It’s bad in bushfires. Bad for the firefighters especially. The ash generates the heat that sustains the bushfire. Like in Bowral before last Christmas. Things start self-combusting because of the ash in the upper atmosphere from all the burning trees and timber; it’s suspended up there like what happens when a volcano erupts. It generates huge amounts of heat because it just sits there and nothing escapes.”

Matthew just loves his paleontology – and his science in general. It’s all in the details, like he says. He loves it too “because science is always based on an argument. But we don’t argue or fight to hurt one another. We fight to help one another and learn something new. That’s what science is.”

It’s good to think about all these things, Matthew believes. Life is not so simple and you need to see all the connections. “People might have a tough life. They might end up going to war or taking heroin. But it might be those decisions are a way of getting away from trouble. Not the trouble itself.”

A few baby magpies nearby distract Matthew. He points them out. “They’re talking to each other. It’s strange how their feathers go from brown to black when they grow up.”

Matthew asks if I can take a photo of him with his mask on. “It will make people remember what year this was. After while, a face with a mask is going to signify 2020.” Then he has another pun for me. “You can call it Matthew Unmasked and Masked, before and after.”

He thinks Addi Road is bit like all those stories of nature and science and paleontology that fascinate him. “Sometimes the media focusses on the dark side too much and does not look at the light side. It doesn’t understand people. Coming here to Addi Road, it picks you up, it helps you. It is something you don’t forget. You might never know the depths that people are at. How low they are feeling. But people pick people up. And it’s not even with what they think they are doing and giving, it’s just by being here and inviting other people to be here too for a while. I just love ecosystems. They’re so complicated and so beautiful.”

YOU can donate to Addi Road’s food rescue and food security program here.