Making Hard Yards with the Swans 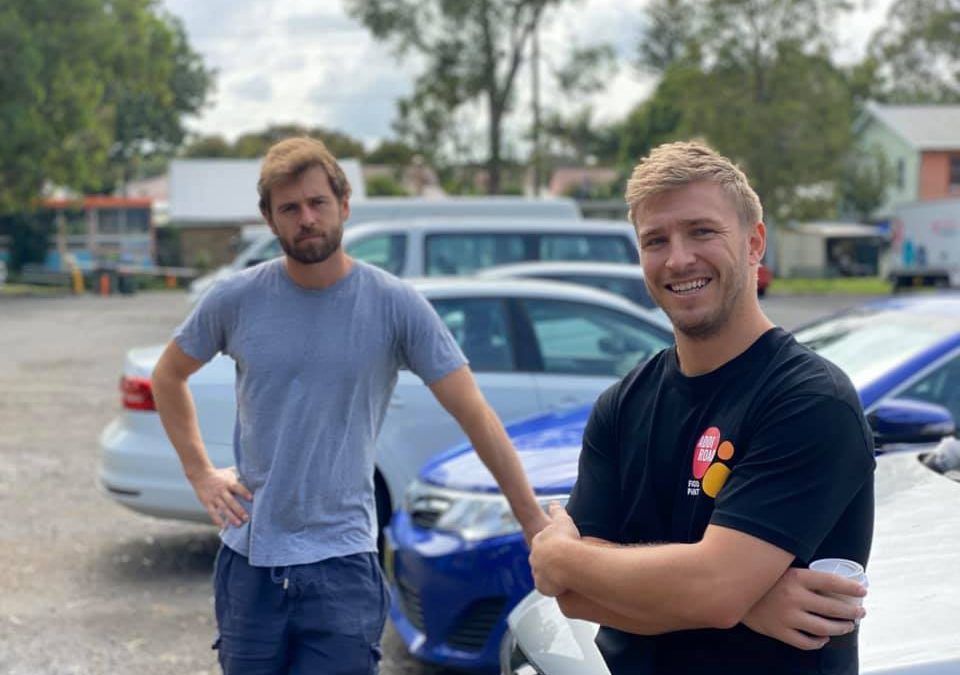 What does leadership mean anyway? It can rise up from the ground as much as something delivered from above. In the car park for the Addison Road Community Organisation two of the Sydney Swans finest, Nick Smith (left) and Kieren Jack, are standing around having a chat about what’s going on with food relief in the city and what they are doing now.

They’ve been coming down to Addi Road’s Emergency Food Preparedness and Response Centre in Marrickville, packing food hampers every day for all the different charity groups coming here to get food supplies for people in need across Sydney.

Both were inspired by Craig Foster’s #PlayForLives campaign that is rallying sports people nationally to assist charity and community groups by volunteering.

As well as packing hampers, Nick’s also become a volunteer driver, jumping in our van to go get loaves of sourdough donated by The Bread & Butter Project, and pick up any perfectly good food that the likes of Woolworths and Coles are not using. It all helps to make those emergency hampers that much more varied and useful and nutritious.

“I reckon it’s awesome what’s happening here,” Nick says. He looks over at our hall where all the work is taking place to put the hampers together. “From my perspective, I feel lucky to actually be packing boxes. I see that I don’t need them, but other people do.”

“It’s always the people worst off who cop it the most,” he says. Which is why, as a leading sports person who has had a lot of opportunities, he believes “it’s all the more incumbent on people like us to support others who are struggling right now.”

Both he and Kieren Jack only retired from playing last year. Nick began doing coaching work with Sydney Swans and working in the hospitality industry; Kieren was involved with the Swans in sponsorship and promotions. Both have been stood down as COVID-19 affects every sport from the community level right up to the big professional clubs. They are effectively out of a job and not so sure what the future might bring.

Even so, Nick says he and Kieren “still have enough of a buffer from playing to put food on the table at home for now”. In the meanwhile, being here at Addi Road is what’s inspiring him and where he feels they can contribute the most. “It’s really important work.”

Like Nick, Kieren Jack landed here at Addi Road because of Craig Foster’s #PlayForLives. “Sam Mostyn, one of the directors of the Sydney Swans told Nick and I about what Craig was doing. So I gave Craig a call last Monday morning to find out more. Two hours later he had me down here at Addi Road packing food hampers!”

Kieren laughs. “I just loved the vibe. And I’ve been coming down here every day since. Packing the hampers, just doing it, it really spurred it all on for me.”

“#PlayForLives is a great campaign. There’s a need to respond to it and raise awareness. Sport has shut down all over the country, but we can still play a significant role off the field. The demand for help out there has never been greater and we can answer that. Now we have got Luke Parker, who is Captain of the Sydney Swans, down here at Addi Road today with us, volunteering as a driver to do the deliveries for the hampers.”

Kieren becomes reflective about it all. “When you’re a player, you can end up in a football bubble,” he says.

“You don’t see the ground work, the hard yards being made at a community level. Sure, we come out when we can, we see what we can, and we help where we can in the community. But it’s usually just a visit under normal circumstances, a few hours.”

“This is different. And it’s actually bringing a bit of balance into our lives too. So we get something out of it. But anyone can help, whether you’re a professional or involved with a local club. That is why Craig’s #PlayForLives campaign is so great. It’s rallying all of us.”

“To come here to Addi Road and make the emergency food  hampers every day, to be here and see the struggle, to see those hard yards being made and be part of it, and see all the cars from the different charities lining up to get the hampers… well,” Kieren says, stopping for just few seconds to find his words. “It hits home.”

You can make a financial donation to Addison Road Community Organisation here: https://addiroad.org.au/donations/donate-now/