In the Moment – Making music with Polly 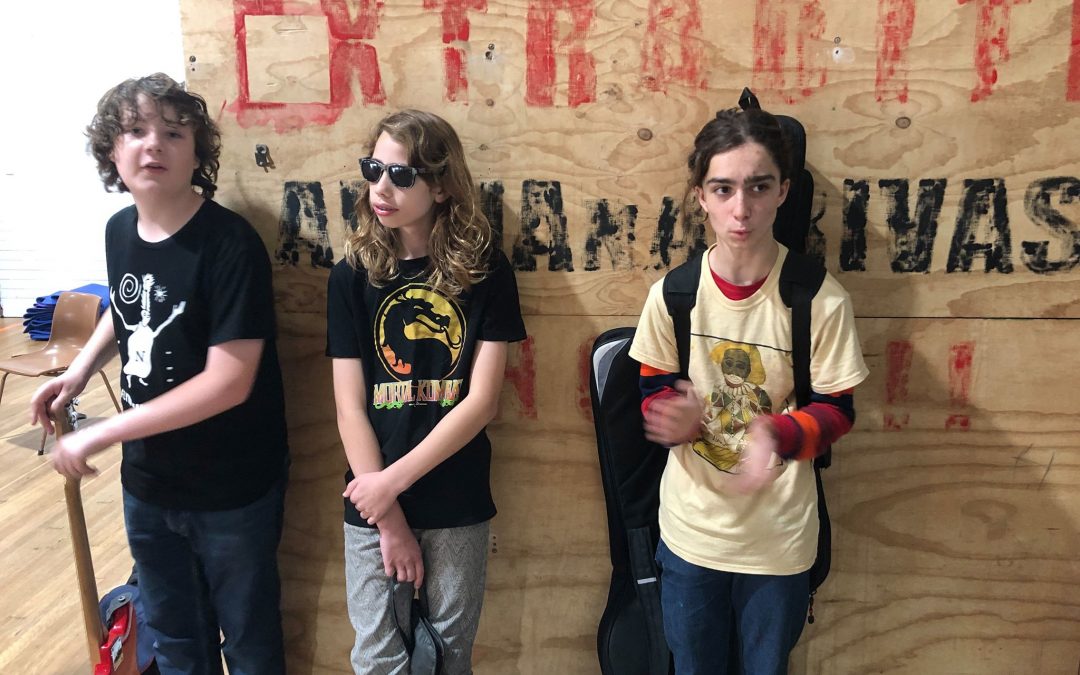 The teenage band Polly won our Kids Rock the Street Food Markets event in early April this year, taking away a wonderful prize from Zen Rock Studios – free professional recording time with an experienced engineer. We spoke to guitarist, vocalist and singer about Miro about the band and its vision for the future. We think they are something special.

Miro from Polly says they are just “a weird rock band from Marrickville”. Talk to him for a little while and you get the feeling they might become something much more than that. Miro has just turned 14; his band mates Tama and Chris “are still 13, but they will be 14 soon.” It’s a classic three-piece set-up – guitar, bass and drums – though Miro says they are thinking of “getting a girl to join the band. She plays acoustic guitar.”

Students at the Dulwich Hill School of Visual Arts and Design – “it’s a bit of a mouthful so just call it DHUSAD” – Polly have been going for about two years. “A lot of that time it has just been jamming,” Miro says. “It’s really taken shape in the last year once me and Tama, the drummer, got Chris our bass player to join us. It’s become a much bigger thing since then.”

Bigger in what way? “Well I have started writing a lot more. It’s just a fantastic outlet for my creativity. There’s a lot more initiative in how we are approaching things.” Initiative? “Yeah. Because of the interest. We’re more involved rather than, like, just wanting to play video games. We’re writing originals. We’re all more into it.”

To begin with “me and the drummer got together because of Nirvana. We used to do a really bad cover of ‘Where is My Mind’ by The Pixies too,” Miro says. “But we’ve grown out of that grunge band thing. If you want to stick to that 90s formula it’s going to get boring.”

Ove the last year or so he has become more interested in folk and electronic music as well as shoegaze. “And trying to infuse all that with a punky sound.” He loves Aphex Twin and Radiohead’s Kid A and A Mirror Shaped Pool, “that’s had a lot of play at my house”. But his favourite band of the moment is Death Grips. “Do you know them? They’re like hip hop and electronic and punk rock all mixed together.”

“I also love Nick Cave’s newer stuff, like Skeleton Tree. Although where I am now, I am more into Push the Sky Away. Maybe I am just not as Emo as I was a year ago!” he jokes. “My favourite song on Skeleton Tree is ‘Magneto’. I like the way he has this droning bass line that holds the song together. And that hook when he sings ‘I love, you love, we love’. Just the repetitiveness. It gives it something intense and pervasive, but at the same time it’s a super dreary feeling.”

Out of the old school he favours The Cure’s Disintegration album. “My mum likes the poppy stuff like The Head on the Door much more. But I prefer Disintegration. The songs are still catchy, but it has a heavy feeling, like you’re drowning in molasses.”

Polly now have a set of original songs to play, among them titles like ‘With the Velocity’, ‘Spine’, ‘TTSP’ and ‘The Pythagoras Blues’. “’Spine’ is a funny one. We had these two songs, ‘Spunky’ and ‘Uncultured Swine’ that we didn’t know what to do with. So we just mashed them together and made one song that turned out better.”

“I try to write to an emotion rather than a concept,” Miro says. “Except for ‘The Pythagoras Blues’, that contradicts what I am trying to say. That was more literal. I wrote that about having to do my maths homework when I really wanted to write a song.”

To explain what he means about his lyrics he refers back to Nick Cave’s more recent song writing. He also cites the lyrics of Jeff Mangum from Neutral Milk Hotel. “He does this thing where they sound really absurd, and he obscures meaning, but in doing so he draws out the emotion. Like in the Neutral Milk Hotel song ‘In the Aeroplane Over the Sea’, there’s his crazy imagery and this pervading melancholy.”

For a group of 14 and 13 year olds this sounds like a pretty sophisticated set of references and way of thinking, a love of music that goes deep. Miro says there is something about playing music that is “for me now. It’s less future based and more present based. There’s this euphoria. I’m not thinking about anything else. I tend to be dreamy and not present a lot. It’s the only time I am wholly invested in something and totally in the moment.”