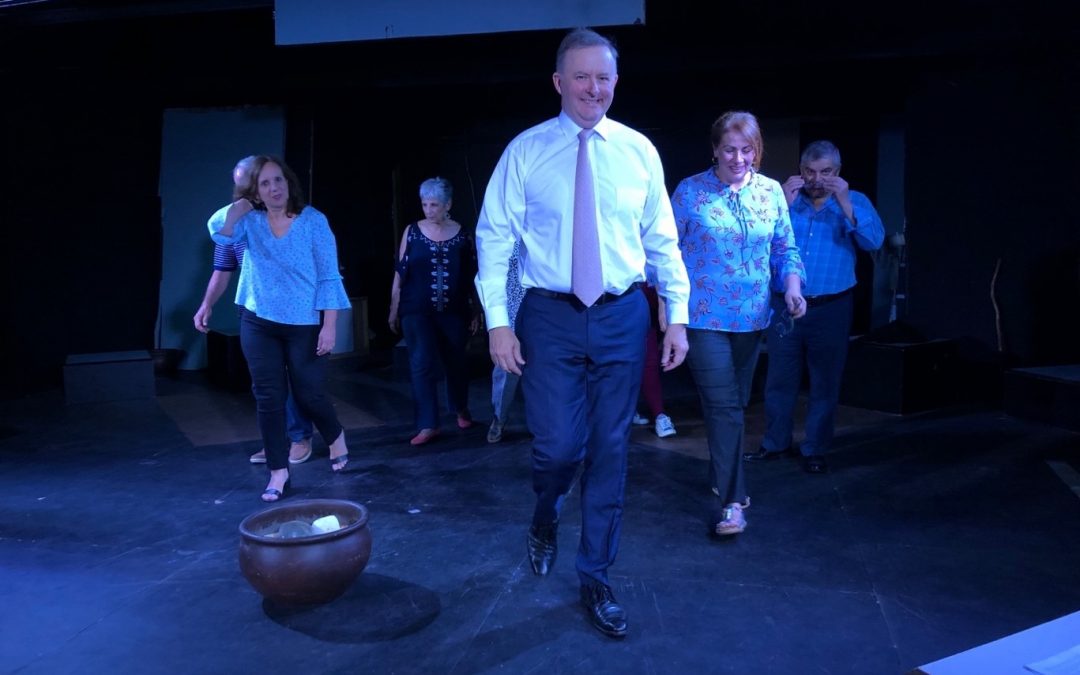 A report on a February visit by Anthony Albanese, the Member for Grayndler, to the Greek Theatre at Addison Road Community Centre. Albanese acknowledged the Centre “embodies the diversity that is here in our community; and it embodies the creativity.” And he supported our many social justice activities. “Substantial wealth has come into this community,” Albanese said, “but there is a massive underclass that needs our support.”

The Federal Member for Grayndler, Anthony Albanese MP, brought his voice home to the Inner West recently, appearing live at The Greek Theatre in the Addison Road Community Centre on a hot February morning.

Albanese was invited to morning tea – and to the stage – by Evelyn Tsavalas and Stavros Economidis, Board Members of the Greek Cultural Assoc Inc and two of the powerhouse figures behind the ensemble that runs the Hellenic Art Theatre (HAT).

‘The Greek’, as HAT is affectionately known, was filled by an audience that included members of the not-for-profit service delivery and arts organisations housed at Addi Road, as well as many individual artists and ensemble members.

Speaking from the stage of The Greek, Albanese appealed to the multicultural spirit of the gathering: “I’ve moved all over the world,” he bragged… “Camperdown, Newtown and Marrickville.”

After a few laughs (“Good one Albo!”) (“Didn’t he use that joke last week in the Wentworth Courier?”) the Federal Member for Grayndler acknowledged that the Addison Road Community Centre “embodies the diversity that is here in our community; and it embodies the creativity.”

A long-time inner city music fan, and even something of an amateur rock ‘n’ roll DJ when called on to provide a playlist for a real party, Albanese mentioned a recent night out seeing a band at Gasoline Pony in Marrickville. He said attending nights like that and coming here to Addi Road reinforced his pride in “an electorate that has more people involved in the arts than any other electorate in Australia by a long way. And it goes a long way back.”

Albanese also noted the strong connections the Inner West electorate has always had with the Greek community in particular – and the significance of Hellenic culture in determining the area’s character. Relating it to his own Irish and Italian family history, Albanese spoke of the ways in which the Greek community had sustained itself culturally. “The kids who are born here have had the culture passed on – through language, through music, through dancing. And through food, of course!”

Gesturing around the stage and back to the audience, Albanese said that the Hellenic Art Theatre had a special place in the Inner West. Sadly, HAT’s Artistic Director Stavros Economidis to hear Albanese’s appreciation. Economidis had been rushed to hospital from rehearsals for The Trojan Women only the night before. It was left to lead actor and Production Manager Evelyn Tsavalas to “apologise” for his absence – and to induct Albanese even more fully into the Theatre’s significance and history.

Tsavalas told Albanese that the Greek community had been involved with the Addison Road Community Centre from its very beginning in 1976. She recalled how ‘Addi Road’ had sprung from a Whitlam-era vision of multiculturalism and community spirit. “I’m trying to pull on some heartstrings here today,” she joked. Tsavalas then told Albanese it was this very same history which meant, “We’ll fight tooth and nail to keep this place.”

She was pleased HAT had recently received a $30,000 community buildings grant, thanks to the support of Jo Haylen, the State Labor MP for Summer Hill. It was a grant that would be used to repair flood-damaged flooring and sub-flooring. Though was only half what was needed to complete those repairs, it would help get one essential job done.

Like much of the infrastructure, and many of the buildings housing artists and community organisations across the 9-hectare Addison Road Community Centre, ‘The Greek’ is ageing – and needs a lot more attention.

As Tsavalas explained to Albanese: “We just want a safe space to meet and perform in. We’re letting the theatre out to other community groups too, including youth programmes. To lease it comfortably, it has got to be safe and in order. What benefits us, benefits the Addison Road Community Centre Organisation – and vice versa. We don’t want to be selfish about it. The whole Centre is important to us; it’s part of our history in Australia. It has a powerful sentimental attachment for the Greek community. That’s why we support Addi Road.”

Barbero held a detailed funding document in her hand. It explained how, “Despite our infrastructure problems, we’ve continued to deliver and host services for the Inner West in a climate where many services are closing and leaving due to the high rents. Their departure leaves a growing void in the community that we’re doing our best to fill.”

Her document also stated, “Along with providing a home for many community services and arts groups, we have our own community programs and calendar of events. We also provide a public access point that these community organisations would otherwise lack, a genuinely engaged space where people and ideas can come together, a ‘home’.

“A part our work involves ensuring the survival of this valued heritage site in the community, particularly at a time of over-development and decreasing green spaces. What we have here is rare and people appreciate it.”

As she handed Albanese the document outlining Addison Road Community Centre Organisation’s infrastructural needs, Barbero emphasised that “the Centre has received no substantial Federal funding since 1988, when Gumbramorra Hall was built, itself now a significant maintenance and repair drain on the Centre’s resources.”

With the demographic make-up of the Inner West changing rapidly, Albanese told everyone he was very aware of the importance of the Addison Road Community Centre in the Inner West. “Substantial wealth has come into this community,” Albanese said, “but there is a massive underclass that needs our support.”

As he was leaving, an audience member asked him about his more personal observations on ‘loneliness in Parliament’, and how difficult those feelings could be. For individuals, yes, but also as an obstruction to positive communication and good government. It was put to Albanese that this problem of isolation and loneliness was relevant to the nature of HAT, and to Addi Road more broadly, as the Inner West became ever denser and more developed. Albanese agreed; a need for creative and community space was essential to our living, to our sense of connection and community.

Talking informally after the speeches at morning tea, Barbero responded similarly, reaching for deeply human terms to get at what the day had come to mean. “If places like this disappear there are so many people who will have nowhere to go, nowhere to gather, nowhere to connect and be a part of a community, even it’s just to come here and sit under a tree and say hello to another human being.”

On social media later, HAT’s Evelyn Tsavalas would go on to post, “What a great morning! All for one, and one for all!!!” 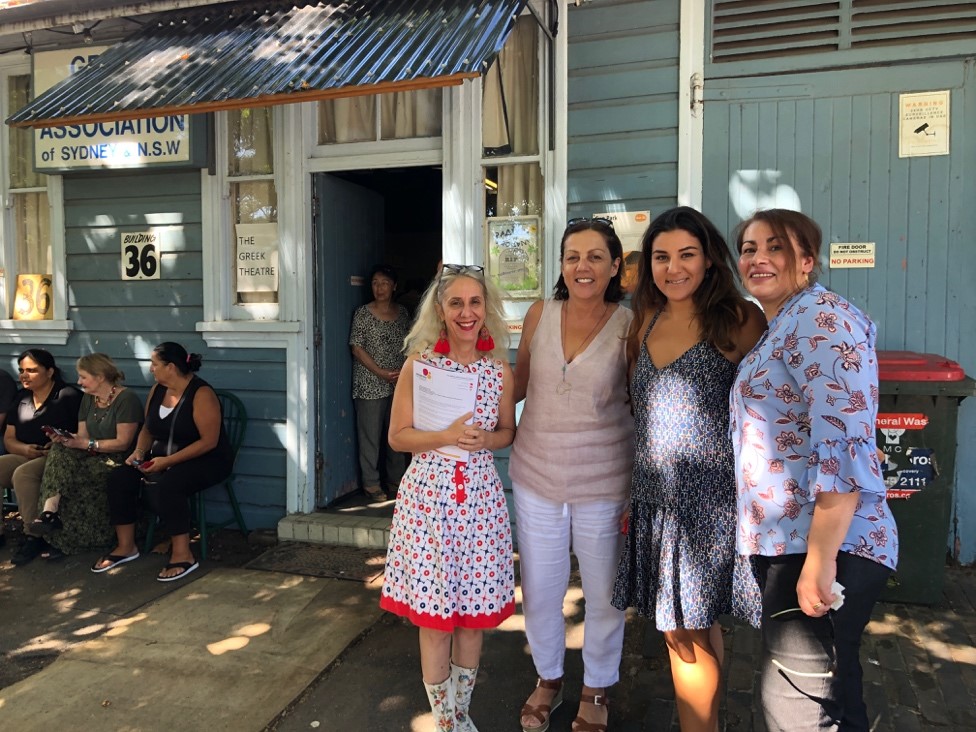 Postscript: HAT’s Stavros Economidis has recovered from his illness. Evelyn Tsavalas thanks everyone for their concern: “Stavros is the leader of the gang, he’s the soul of the place. We love having him back.” HAT are currently preparing for an encore season of ‘The Trojan Women’ in mid-May. Addison Road Community Centre Organisation (Addi Road) are meanwhile awaiting feedback from the Member for Grayndler on their document requesting critical funding support. A Federal election is slated for the 18th May 2019.