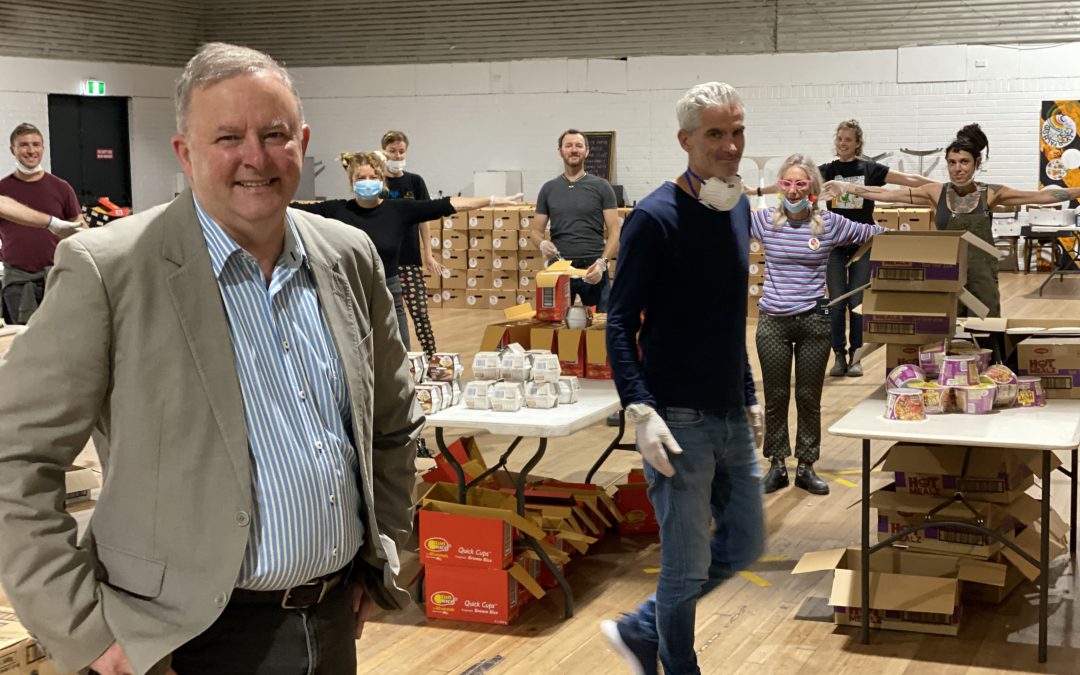 Anthony Albanese came down to the Addison Road Community Organisation this morning to take a closer look at Addi Road’s Emergency Food Preparedness and Response Centre.

He met up with footballer and SBS commentator Craig Foster, who has been pitching in here, putting together emergency hampers with a team of sporting volunteers that Craig has roused into action through his national #PlayForLives campaign.

Last week Craig was at Addi Road with the women’s team from his club, Waverly Old Boys FC. Today he did an early morning call-out, and none other than Kieran Jack and Nick Smith, two former Sydney Swans, came on board to help us.

The political leader and the sportsman share a deep commitment to the ideals of community action. Especially now.

Charities and community organisations are being overwhelmed by people in need of food. There are many out there who are disadvantaged and isolated – elderly people, the homeless, casual workers suddenly unemployed, the long-term unemployed battling away more than ever, disabled people unable to get to supermarkets easily… it’s a list that goes on and on.

Addi Road’s Emergency Food Preparedness and Response Centre has been set up to respond to this growing need, supplying charities and NGOs that are feeling the pressure with enough hampers to meet their clients’ food needs.

Craig explains the situation to Albo. Albo gets it. This is his electorate, and despite many well-off people in the area he is well aware of the demographic mix. “There are more boarding houses here than any other electorate in this country,” he says.

As the Member of Parliament for Grayndler, Albo has come down to see what is happening. He speaks of his concern for the lack of long-term planning in response to the COVID-19 crisis, and the need for concreteand structured responses that give people a sense of order and confidence – locally and nationally.

Rosanna Barbero, Addi Road’s CEO, tells the ALP leader we need food hubs like this in every electorate in the country. There’s a lot of work to do. And this is only the beginning.

Craig Foster isusing his #PlayForLives campaign to engage sportspeople and sports clubs all over the country to volunteer and assist at a local level, supporting charities and community groups who are need hands-on help.

What Craig can’t do in that campaign he is here doing on a practical and very immediate level. Helping out as best he can in Marrickville.

Anthony Albanese thanks Craig Foster and Rosanna Barbero for the showing him Addi Road’s Emergency Food Preparedness and Response Centre. He calls Addi Road “the heart and soul of this electorate” when he and Craig make their appeal direct to camera for volunteers and other forms of support: “We are all in this together.”