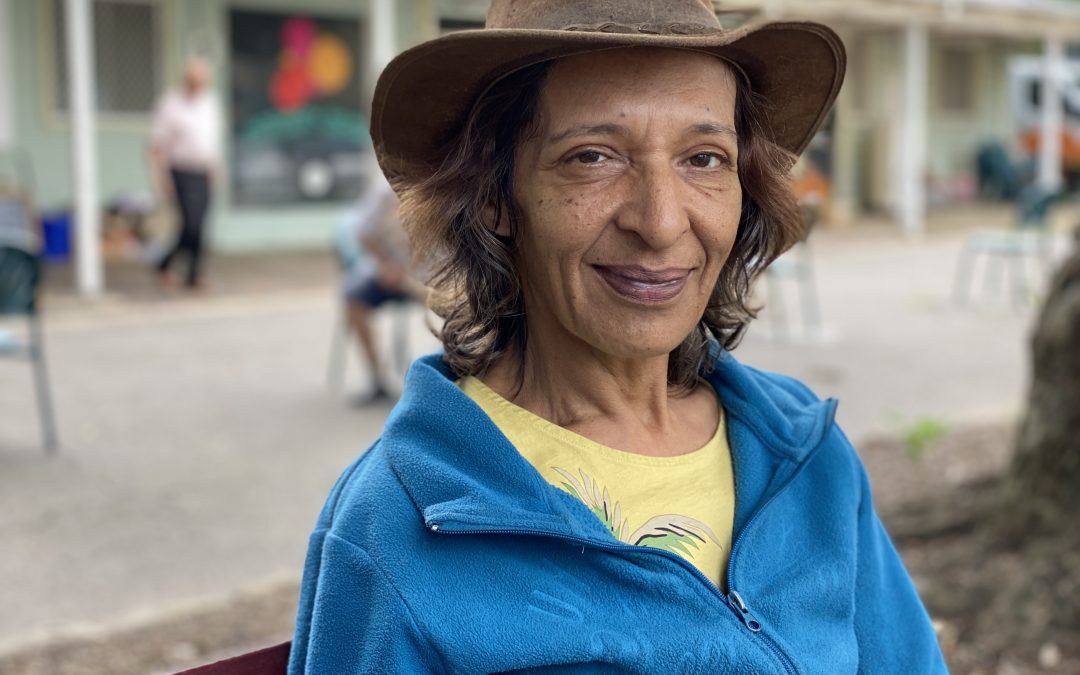 Shiri says that volunteering at Addi Road is a like “coming to spend time in a village. A village away from all the madness outside in the city. I love all the little huts, the trees, my friends the magpies … I don’t mind the ibis either. I like the gardens that I look after. It’s pretty laid back here.”

“I’m not a very regimented person,” Shiri says. Then she jokes, “I’m one of those people that shows up when she feels like it. I’m like Gandalf [in The Lord of the Rings]: ‘A wizard is never late. He arrives precisely when he means to.’ Shiri laughs and admits, “I do get waylaid and side-tracked by other things that need my attention.”

She usually likes to come in to work at Addi Road in the afternoons, “after all the rush”, “pottering around” in the gardens she has created. “I like growing things,” she says. “I hate the concrete look that is everywhere now in the city. All those ugly towers. There’s so much greenery here. All the big trees. The nursery … you can smell the fresh mulch some days.”

Her love of nature began as a girl. “I grew up in the forest in Germany until I was seven years old. I’m Dutch, but my father worked in Germany. We lived very close to the border. It was a 2km walk through the forest to the bus stop to get to primary school in the Netherlands. My father would walk my older brother and I to the bus stop and be there again at the end of the day to meet us and walk us back home.”

“My mother was an extraordinary woman too. She was from a very strong Catholic family in the south of the Netherlands. My father was Bangladeshi – East Pakistan then. He had come to the Netherlands on a scholarship. He’d been married but his wife died in childbirth. So he had a son back in Bangladesh. He’d visit him and my mother would look after us on her own while he was away. She’d take us to school and hear people saying ‘there’s that poor white woman with the black kids’. It was very hard. In the Netherlands children are given the nationality of their father so we did not even have a passport from our own country. It took a long time for mum’s father to accept she had married my dad. It was the early 60s. But my grandfather did come around when my brother was born and named after him.

The family home was in “an isolated but beautiful place”. In summer Shiri liked “watching red squirrels chasing each up other up the trees. There were little rabbits around. Hedgehogs. Adders. We had a big garden. Fruits trees. Crops. It was really cool. A really nice place the middle of nowhere that bordered on to what was basically a national park.”

“Our family house did not have running water. Mum would pull up bucket of water out of a well on a rope for cooking or having a bath. You’d have to boil it on the stove.” Shiri and her brother would make cubby houses in the trees. “Different trees to the ones here. Big fir trees. In winter it would snow. Our house was on a hill and we would sled down it, navigating between the trees. There was a waterhole nearby that froze over and we’d ice skate on it. I remember walking through the fresh snow and our footprints on it.”

A long time ago now. In her adult life Shiri found herself living in Sydney. “I worked in the tourism industry, in hospitality, but I could not stand the commute on the train into the city. I have never liked the city. I’m just not happy being stuck in an office. What for? Why are we working our arses off here? So, I gave it up. Forget it.”

“I didn’t do anything for a year. I just did things for myself. But I already knew about here. I’d had a program for two hours a week on Radio Skid Row called ‘Afro-Caribbean Rhapsody’ from 1995 to 1998, mainly playing music from Africa and the Caribbean. I also got a job delivering a local paper in this area. My paper run around the streets … Addison Road, Sydenham Road, Illawarra Road, Livingstone. All the streets for nearly twenty years from that time on. Just a day a week while my son was in child care.

“Later on I started volunteering at Addi Road. That was after I had left my job in the city. It was around 2016. At first, I helped out with food preparation and the Food Pantry because of my background in hospitality. The Food Pantry was only just starting back then. It was mostly because I had met Gurwinder and she said to me, ‘come and join our family’. So, I said ‘yep’.”

TAFE ran a course in horticulture on the grounds of Addi Road. “They did some other ones too. One was about food growing and sustainability. Another on rooftop gardens for community housing. Then I went to Padstow TAFE and did a Cert 2 and then a Cert 3 in Horticulture. My teacher Paul really encouraged my interest. I got right into it.”

“I saw the whole development of the Addi Road Food Pantry while that was going on in my life. The Food Pantry just got bigger and bigger. From one day, two hours a week to two days and then three days. Even in the last year it was all odd hours. Now it’s every day of the week and uniform times. It’s been great to see that happen.”

Shiri steadily applied her own skills to the grounds of Addi Road while she watched the Food Pantry grow. “See that garden over near Hut 6. I did all that. The Jacaranda. I planted it. I did the garden outside Maggie’s Rescue as well. I need to get rid of the kikuyu grass that keeps popping up there. It’s a lot of maintenance, all the little gardens. They teach [horticulture] in the garden behind the theatre, so you can’t have it too tidy there or the students will have nothing to do.”

“There’s a lot of nice areas here,” Shiri says. “Nice corners that I like being in. I do potter around. I like talking to all the artists here with studios, seeing what they are doing. And when the events are on, that is fun too. It always nice when everyone comes out and has a good time. People are just happy to be in this place.”

Shiri gestures out across the grounds and up to the trees. “You’re not pressurised here. People are not pushing you. Life is too short for that. It’s different at Addi Road. And you can see a lot of different people. The volunteers are from all walks of life, all different ages, different cultures. I can relate to the people who come here.

“In the city the whole thing is about money. The dollar. Productivity and the dollar. There’s more to life than the dollar. Much more. I get other things here. Food. Trees. Birds. My gardens. There’s always something here.”

YOU can donate to Addi Road’s food justice program here.

YOU can find out more about volunteering here.