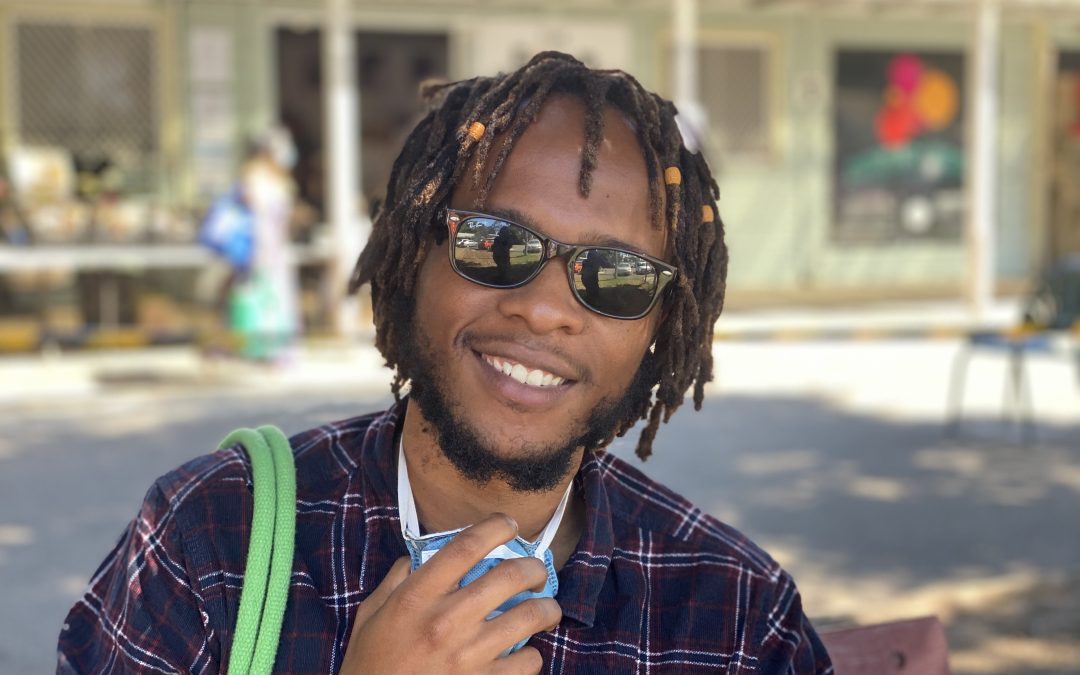 ‘Ten minutes?! Can we make it five?” For such a languid seeming guy, Paul is sure not keen on wasting any time. He apologises and says they’ve just got their ticket to go shopping at Addi Road Food Pantry Marrickville. Social distancing and health regs means the numbers of people inside are restricted and you don’t want to miss your turn in the line when your number is called.

He’s with a group of housemates from Tempe. They’ve nominated him as their spokesperson. “Why me?” he cries. Then he bounces over to nearby bench and says “okay”.

Paul tells me he is from Zimbabwe originally. He and house mates are “all Australians” he says, but they have the rest of the world in their system: “Australian, Chinese Australian, Indian Australian. You know how it is.”

They’ve come down as a team to shop for their house. “We like that it’s affordable. And it’s good to shop local,” Paul says. “And it’s a charity, so that’s good to support. Stopping food going to landfill, helping the environment.”

I ask Paul if he’s a student. He laughs a little and says, “Yeah I study. I’m a student of life.” Then he starts to crack up like it’s the best joke he has had on himself all day.

In fact, he says, he used to be a landscaper. Then he got into making films and documentaries. Now he is a founding member of Treason Flowers, who have contributed content to everyone from SBS to the Art Gallery of NSW and the Antenna Film Festival. Go check out their website, it’s a pretty cool operation.

Paul agrees that the art scene has been hit hard by Covid-19. Lots of people are looking for work and losing their incomes. “Especially with no more live concerts.” He’s pretty excited about filming a classical music event next week at Sydney Town Hall. It’s cause for optimism. The first time in ages. But Paul reckons he is lucky, and he is not complaining: “Treason Flowers have good archives and we have been able to make content we can re-edit for home viewing.” This, and few other things, he reckons, “have been enough to keep me afloat – just.”

A place like Addi Road Food Pantry Marrickville really helps. But it’s not just the money saved – or even the food rescue set-up and the sustainability that he supports. “I really love the rare drinks you get in. Some vinegar drink from Taiwan. The rare snacks too. And the fruit and vegetables are fresh. And the free bread. It can last us a week or two after we shop here.”

“And just how coming here is a not-a-hassle option. You go to Woolworths and the big shopping centres. There are so many options, all this hassle, it’s too much. At the Food Pantry if it’s here it’s here; if it’s not, it’s not. I don’t need all the choice. Just enough to get by and live.”

Paul looks over his shoulder. His number has been called and his housemates have already gone inside. “Can you mention Treason Flowers in the story?” he asks.

He stands and heads after his friends and that rare vinegar drink he likes. Paul seems on top of the world, a young artist on the move. “It all depends on your outlook,” he says with smile as he quickens his step. “For me personally, I can see that it is not as bad as it could have been. I’m healthy; my friends are all alive and well. I guess I am getting used to the new normal.”

YOU can donate to Addi Road’s food security and food rescue programs here: