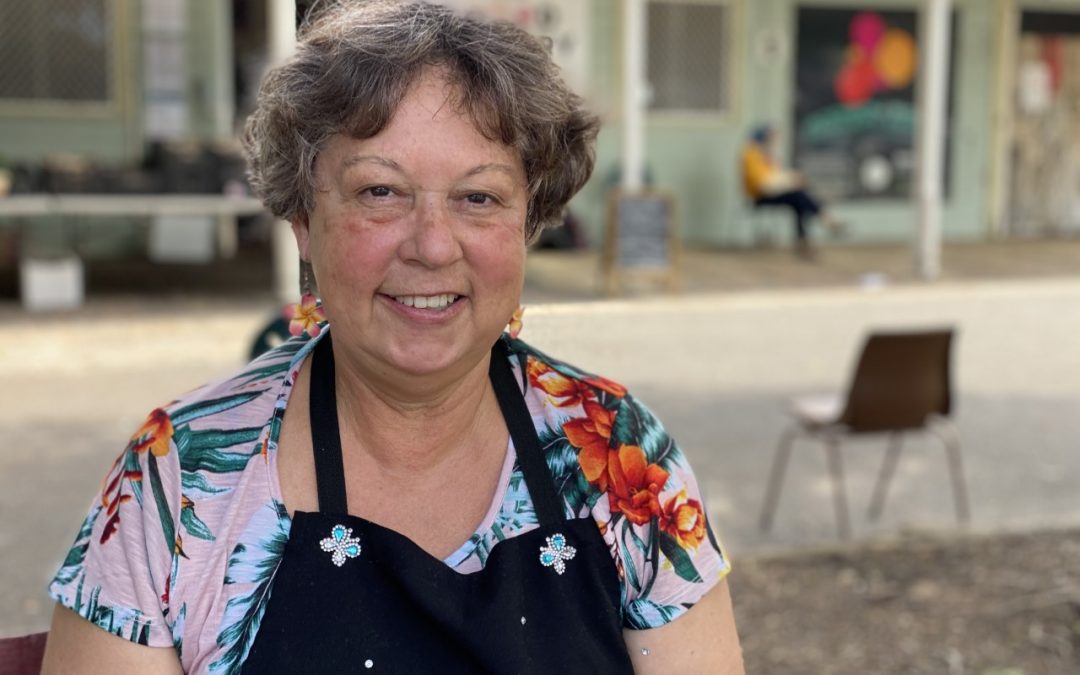 Estelle has been volunteering at Addi Road Food Pantry Marrickville for the last year. “It’s been fun,” she says. “The people are nice. There’s such a variety of people from all steps of life who volunteer here … we have students, a Qantas engineer … then there’s the customers. There’s quite a variety there. It’s just a fun part of the week coming here.”
Her own volunteering began at Addi Road when Covid-19 meant having to work from home a lot more. Estelle had been employed a few days a week by the Combined Pensioners and Superannuants Association (CPSA), which works to improve the rights and well-being of pensioners of all ages, superannuants and low-income retirees. Though she is still working for the CPSA and makes use of ZOOM, Estelle missed the more social aspects to daily work communication. She heard Addi Road needed help and liked the sound of what was happening.
Faces are something that fascinate Estelle. Her other part-time job involves being a face painter of children. “I was a clown back in the 1980s when face painting came to Australia. It was a new thing back then. And the clowns were the first to take it up.” Children really enjoy it, she says, and they have very particular tastes. “I love doing the monsters,” Estelle says. “I like doing butterflies too, but the monsters are the most fun for me. The kids tend to follow whatever film is out.”
Covid-19 put an end to her face-painting work in March. It was only just starting again towards the end of 2020 when the northern beaches lockdown and renewed concerns across the city caused it all to stop once more. Estelle is hoping that as things improve she can set her friendly monster brush to work again.
With time to spare and wanting to get out of the house more, coming to Addi Road a volunteer has given her a new place to be. “It’s all to do with the people that work here. Just having someone to talk to and helping people with food. But really, all the things that go with helping people in need. That’s the best thing about volunteering.”
Despite having to wear a mask at Addi Road Food Pantry, Estelle says, “I run into people all over the place that recognise me. People must recognise my eyes because they’ve never seen my face. I think everyone is getting good at recognising people’s eyes. The other day I was at Marrickville Metro and someone gave me this big hello! I thought who is that guy? It took me days to figure out that it was an Addi Road customer who comes here in every week with his dad.”
As we sit on a wooden bench talking, another young man stops and says hello to Estelle. He tells her he will be back later this week to start helping out. “That actually happens a lot,” she says. “It can be hard to pick a single highlight about doing the volunteer work. There are so many moments. But when I think about it, it’s people like him. He’s an asylum seeker. There’s a whole lot of people like him who need food. They come here in real need. Then some of them end up volunteering to help us.”
“I have another friend like that. She’s legally blind. She has started volunteering one day a week to pack the hampers over in the Addi Road Food Relief Hub. The things that go on the hamper boxes are big enough for her to see and to pack.”
“It’s just a nice thing to help people,” Estelle says. “At first, they are just grateful for the food and the groceries. You see the change in their faces as things improve. That’s when people will come and volunteer. They have food. They volunteer or just help us out in some way. It’s doing something that matters. It’s their way of paying us back.”
+

YOU can donate to Addi Road’s food justice program here.

YOU can find out more about volunteering here.