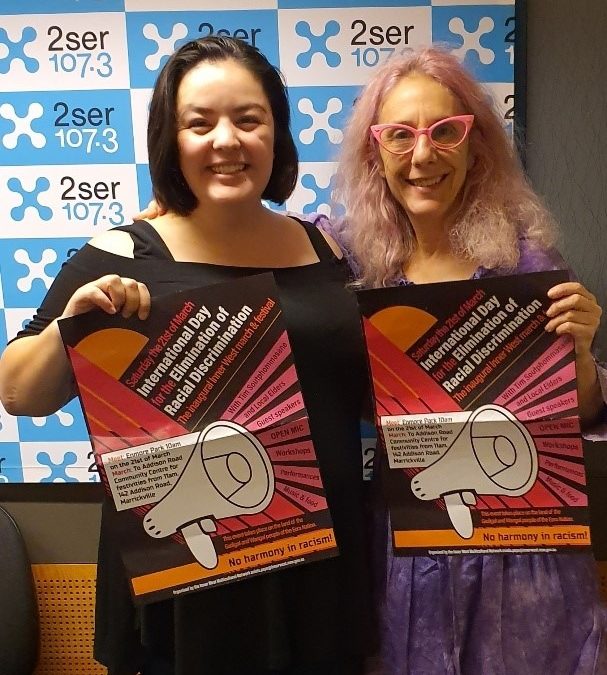 “We’re gathering at Enmore Park [on Saturday March 21st morning at 10am],” Rosanna told 2SER. “We’re hoping lots of people will come. There will be lots of vibrancy, lots of colour. Lots of creativity. Lots of diversity. And lots of fun, lots of cheer.”

Rosanna explained the background to the march in terms of Addison Road Community Organisation’s leading involvement with the Inner West Multicultural Network. “We have an Inner West Multicultural Network. And that is an alliance of 120 civil society organisations. So it also includes government and non-government organisations. We have three major aims. One is that we advocate on policies, particularly critiquing new policies. Two, we share information, and referrals and services. And thirdly, we implement events.”

“Hence the Saturday 21st of March. International Day for the Elimination of Racial Discrimination. Which is a United Nations event celebrated all around the world. The Inner West Multicultural Network represents maybe 43 different ethnic communities overall. And a lot of people report at our meetings talk about the racism and discrimination that members of their communities, or even their community organisations are facing. Often on a daily basis. So there’s the structural inequality and racism and inequality. But there’s also that daily, more subtle, social discrimination.

“When we were talking about an event we said, well why are not talking about racism and discrimination? Why is Australia the only country in the world to rename and celebrate the day as ‘Harmony Day’? When we really need to be talking about is what’s happing to people and how we can collaborate and build solidarity to combat what is happening in our society. Because our interests are the same. And that is to have a better society where everyone is equal and everyone is afforded rights – and not just a few privileged sections of society.”

Thinethavone ‘Tim’ Soutphommasane (former Race Discrimination Commissioner at the Australian Human Rights Commission from 2013 to 2018) will speak at Enmore Park. Other speakers are soon to be announced.

2SER-FM’s Jess Klajman noted how vital such protests and marches had become in the last five years. And popular. “The swell and empowerment of these types of actions,” she said, was “inspiring”.

Addi Road’s Rosanan Barbero agreed. “Some of the more traditional platforms of exercising our democratic rights and having a voice, or having a role in decision-making has been closed to us – or is shrinking or does not open equally to us. This form of gathering and doing things together – and, as you say, building links and networks – and also being able to express oneself and comment about society, are all very important. A right to a say and a right to be heard are very important to society.”

Inner West March and Festival for the Elimination of Racial Discrimination

March will leave Enmore Park and follow a direct route along Addison Road, which will be closed for the morning to allow the march to travel in the style of the multicultural street parades held in Marrickville in in the 1970s and 80s

Once the march reaches Addison Road Community Centre, festivities will begin, starting at 11am.

Guest speakers include Local Elders and Thinethavone ‘Tim’ Soutphommasane (former Race Discrimination Commissioner at the Australian Human Rights Commission from 2013 to 2018). Further speakers to be announced over coming weeks.

There will also be music, dance and other entertainment, as well as an Open Mic for poets and performers. Workshops and food stalls will reflect the multicultural and community spirit.

Due to public health concerns the inaugural Inner West March and Festival for the Elimination of Racial Discrimination has been postponed. More news to come on alternative actions… 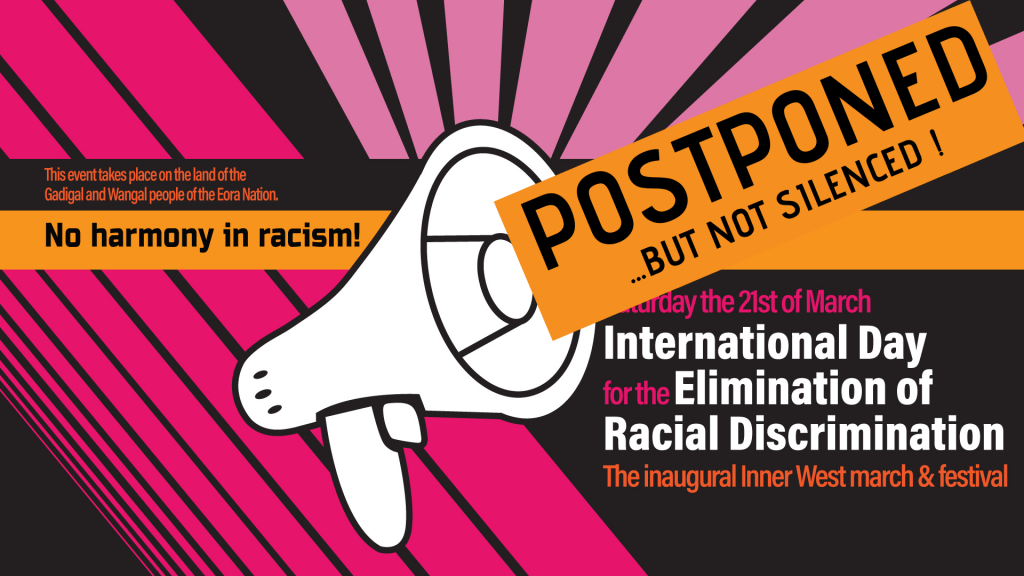