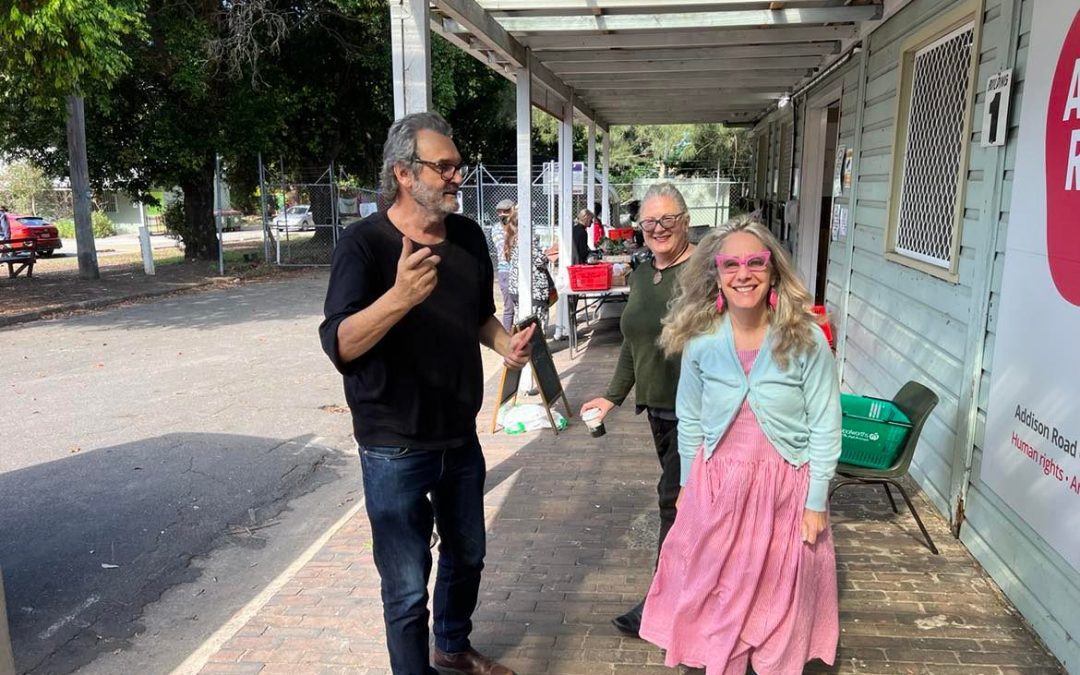 Addi Road CEO Rosanna Barbero describes the organisation and its work as “a tango, a dance”. She knows that every day is different, every challenge and new idea something to be absorbed for the better of the community.

Right now that means a gala screening and fundraiser on Saturday 8th October for Take Heart, Deadly Heart, a film that deals with rheumatic heart disease in Australia, and how a family’s successful effort to save their ten-year-old son alerted them to a rare and treatable disease in Sydney that is now the leading cause of death among Aboriginal and Torres Strait Islander children across the country.

In the last few weeks Rosanna has also launched a makeshift venue in Hut 8 that was dubbed “The Beatnik Cathedral” for a poetry-and-music event called Intuition Kingdom. There’s talk of shortening the name to ‘Beat Cathedral’ in honour of the space’s history as a drill hall for the Citizens Military Forces just before World War One broke out. The original Hut 8 would go on to become a recruitment building for many decades and wars after that.

Like so many structures at Addi Road, the heritage-listed history is long and deep. Attending to the fragile state of buildings that were never built to last is another ongoing improvisation that makes Addi Road a daily tango indeed, especially in the mad weather we now deal with. 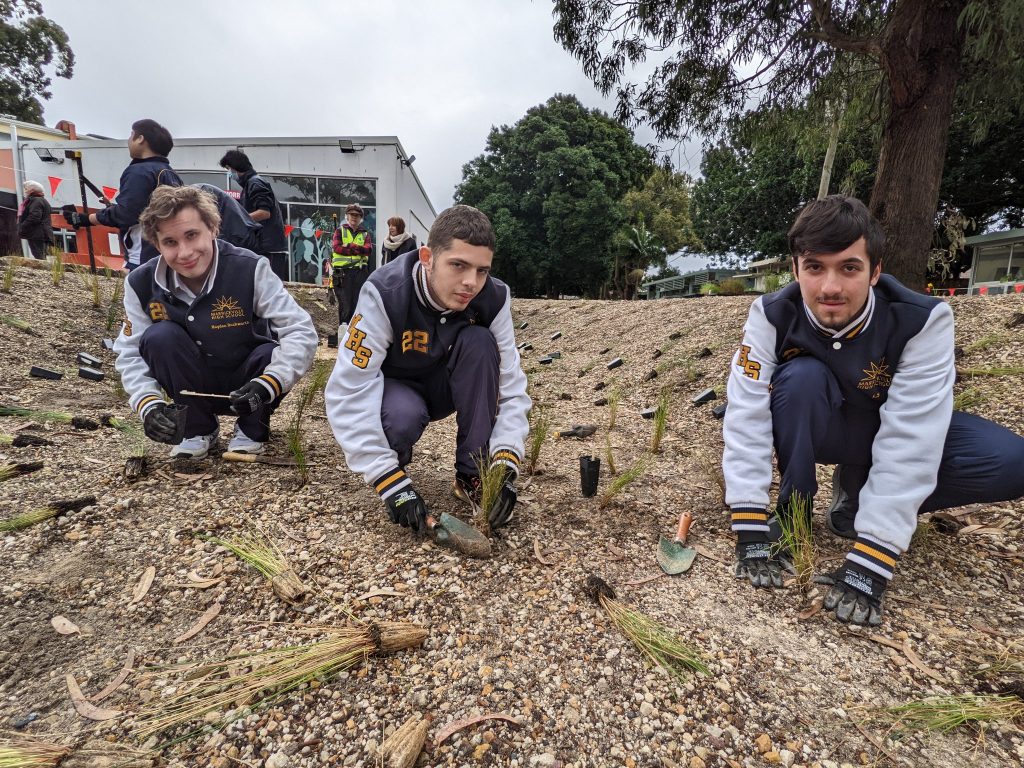 Always prone to flooding, Addi Road has collaborated with Inner West Council on a rain garden, also called a bio-retention system, next to its Gumbramorra Hall. Climate change has been making its presence felt at the centre and in all our lives as the skies keep pelting down. The Rain Garden filters stormwater, bringing back a natural ecosystem of ponds and native plant life, and providing a sustainable solution to one of the biggest problems we have. A community planting day just last month was a huge success, with the Australian Indigo species already flourishing and pleasing local butterflies – as well as children who often visit the centre.

Behind the scenes, it’s been equally busy. Melissa Holmes is Addi Road’s new COO (Chief Operating Officer). Seeing how Rosanna leads the way across so many different initiatives “was pretty inspiring to me,” Melissa says. “She has the most fabulous vision. And it was that, really, that made me want to work here.” It’s perhaps not the most formal COO mission statement you will hear, but the guts and humour inherent to Addi Road are very present when Melissa goes on to say, “I want to learn from Rosanna. And I just want to make shit happen.”

It excites her that “there are no limits to the imagination here – except, of course, funding. Addi Road does so much on the smell of an oily rag.” She sees the inspiration and good faith behind it as something that runs through the huge army of volunteers that work at Addi Road, keeping everything from its Food Pantry grocery stores to regular events on an even keel.

The nature of Addi Road was made vivid to Melissa during the lockdown. “I witnessed the COVID pivot,” she says, “when Addi Road converted its Gumbramorra Hall into a Food Relief Hub. Pallets of food and hamper boxes everywhere being packed. It was a huge operation and an immediate response to people’s needs.”

At that stage Melissa was working for Stepping Out as Program Coordinator. Her work in the Inner West involved “supporting survivors of childhood sexual abuse to live in the community”. Before that she had worked with homeless people and those at risk of homelessness. She’s not sure what led her down this vocational path, apart from something in her that “likes sticking up for people. I dunno … I like the advocacy of it. It just suits my personality – which I describe as warm but firm, firm but fair,” she adds with a wry smile. 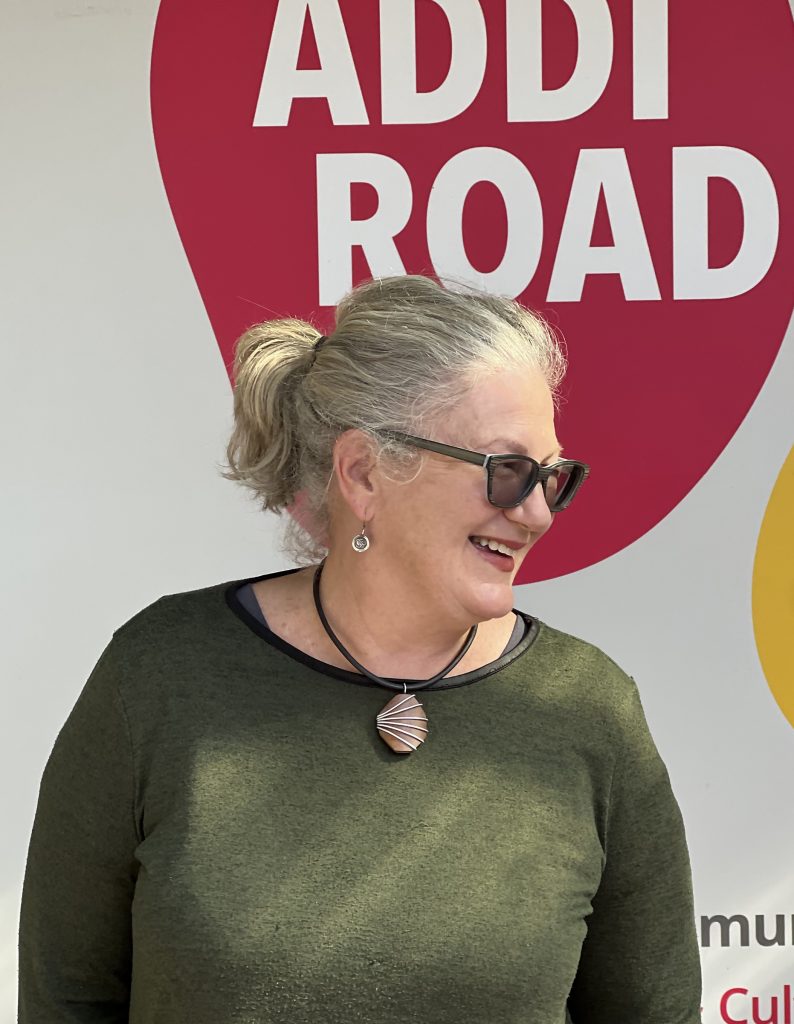 After packing emergency hamper boxes at Addi Road’s Food Relief Hub, Melissa was instrumental in seeing Stepping Out co-housed at the centre with the Marrickville Legal Centre. Now she has joined the Addi Road crew. “I see so much possibility here,’ Melissa says. “I’d like to push the arts and culture side of Addi Road. We all saw how much arts and culture suffered during COVID. I see part of my role as reviving that side of Addi Road while maintaining its social justice and sustainability programs.” Melissa laughs again. “But today there is so much going on I just can’t keep up!”

Rosanna sweeps back into the conversation after ending another phone call. She and Melissa are in dialogue with artists and the queer community to create a major event at Addi Road next February as part of World Pride. They take a stroll around the centre to brainstorm, stopping to admire the Return and Earn recycling facility on site that users jokingly refer to the as “the ATM machine”, topping up their accounts with money made from recycled bottles and cans – and often crossing over to shop at our discount grocery store (stocked with rescued food), the Addi Road Food Pantry.

The actual offices of the Addison Road Community Organisation and the Food Pantry beside it are completely solar powered. Both Melissa and Rosanna take pride in the row of solar panels on the roof, not to mention “the three EV charging stations we have here,” says Rosanna. “The whole of the Inner West only has two while we put in three ourselves on this nine acres.”

Rosanna likes these links between “acting locally and thinking globally”. Working with the multicultural unit of TAFE, “Addi Road has been able to find 15 participants from 15 different language groups to work with their communities on understanding the devastating effect single-use plastic bags have on their environment”. Rosanna sees that activism connecting right back to the very origins of Addi Road as a community centre, birthed by the local multicultural community back in 1976 in the wake of the Whitlam era when “it was a haven for cultural expression and freedom, when social, political and economic equality were the true goals for our community. Which they still are here.”

Michelle Sheather from The Bower arrives. Rosanna and Melissa have been working with her on keeping The Bower at Addi Road. It’s more good news for the Inner West and Addi Road’s bigger vision for sustainability and social justice long into the future. “We’re so pleased to have a this wonderful new collaboration with The Bower,” Rosanna says. ”They are here to stay. We’re working together with them – and the 120 organisations we are in partnership with – to make a better Australia. Addi Road is growing and becoming a leader with a higher level of responsibility. We’re getting stronger every day, and things are still in motion that we can take even further.” 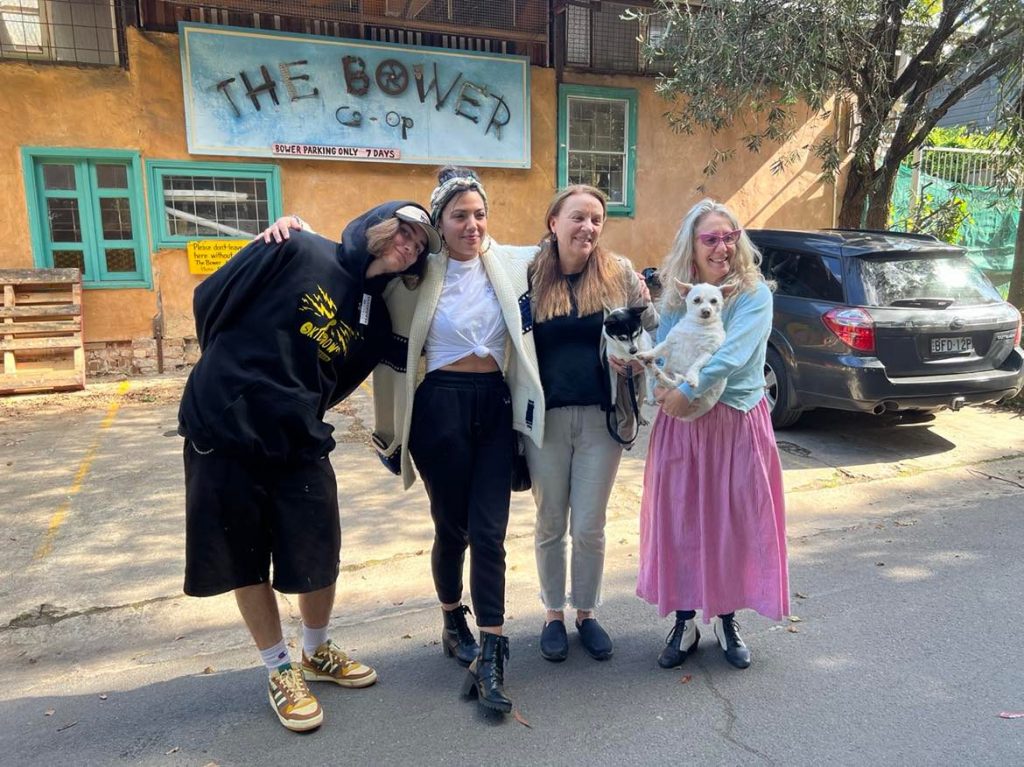