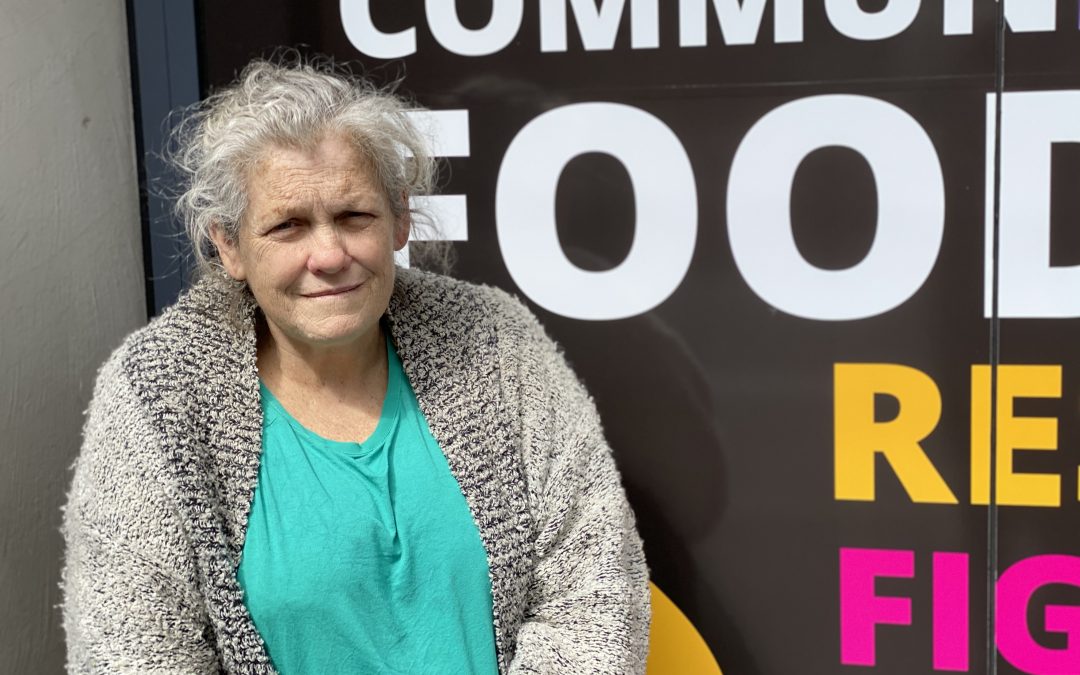 Gaylene is standing outside the Addi Road Food Pantry Camperdown organising a small group of prospective shoppers on opening day. They watch the speeches, the ribbon cutting, enjoy a free pink-iced donut. All of them have their own hand-sewn masks on. Gaylene’s face is well-masked too. She keeps an eye on the road for a few more friends. The 470 bus stops right out the front of the Food Pantry at 31 Pyrmont Bridge Road, Camperdown. But she doesn’t want them to go sailing by and miss the place.

She says the opening of Addi Road Food Pantry Camperdown is, “A great idea. A lot of people will use it once they know it’s here. They just have to get used to the numbers; what do you call them, points?”

That’s right, I say. One point equals fifty cents. Two points equals a dollar. 3 points is one-fifty. And so on. So you see something with ‘6’ written on it, that means it costs three bucks. You spend $5 and you get free bread and fruit and vegetables. It’s a good deal.

Gaylene nods. “Yeah. Once you get used to it you’ll be right,” she says confidently.

She says she likes the whole area around Camperdown and “the other side of Glebe where I live. It’s a pretty good place. There’s a lot of low-income people around here, so they will really appreciate having the Food Pantry. But you know, I see people in private accommodation that are struggling. There’s people in nice houses and they are finding it hard even to pay their mortgage.”

Gaylene feels genuinely sorry for them. She’s pretty used to seeing other people struggle around her. This time it’s different, yet still the same. It almost feels like a good thing. “There’s a lot of people living ‘round here who have fallen on hard times. I met some people in the last couple of months who thought they were better than us – and now they’re the same people who are struggling to pay their bills. It’s nice. You’re getting to know your neighbours better. The community is better. I know that sounds like a silly thing to say. But it’s a 100% true.”

She says she used to live in Millers Point. “I was 40 years in the one house. Then they sold it and I was transferred. It was culture shock having to move. A real culture shock.” The history behind all that is complicated. And she sounds a little upset even mentioning it. Her old house down at Millers Point used to belong to the Maritime Services, she explains, then it was Housing … then everyone in Housing was moved off because of the value of real estate down there and the developers. “My family was in Miller’s Point for nine generations!”

Gaylene makes it sound like the forced move was only yesterday, but then she says she’s been in Glebe now for almost 20 years. The more we talk, the more time seems to slip around and extend itself. It’s hard to measure what happened when, only that all her experiences feel very close at hand.

She tells me she used to work with the Salvation Army as a housing officer. I get the impression this training is what makes her a natural organiser and helper today. “I invited 150 people to come,” she says. “Just with the brochures, handing them out. Making sure people know this place is here.”

And here we are. Outside the Addi Road Food Pantry Camperdown on the first day of spring, enjoying the sweet, sunny weather and a few pink donuts. Gaylene casts a look down the road again as another 470 comes flying past. She’s got time for me to take a photo, sure. She says she is happy to support Addi Road Food Pantry Camperdown in any way she can. Her friends gather together waiting for her. She’s leading the way. She takes off her mask for the photo and looks straight at me and says okay.