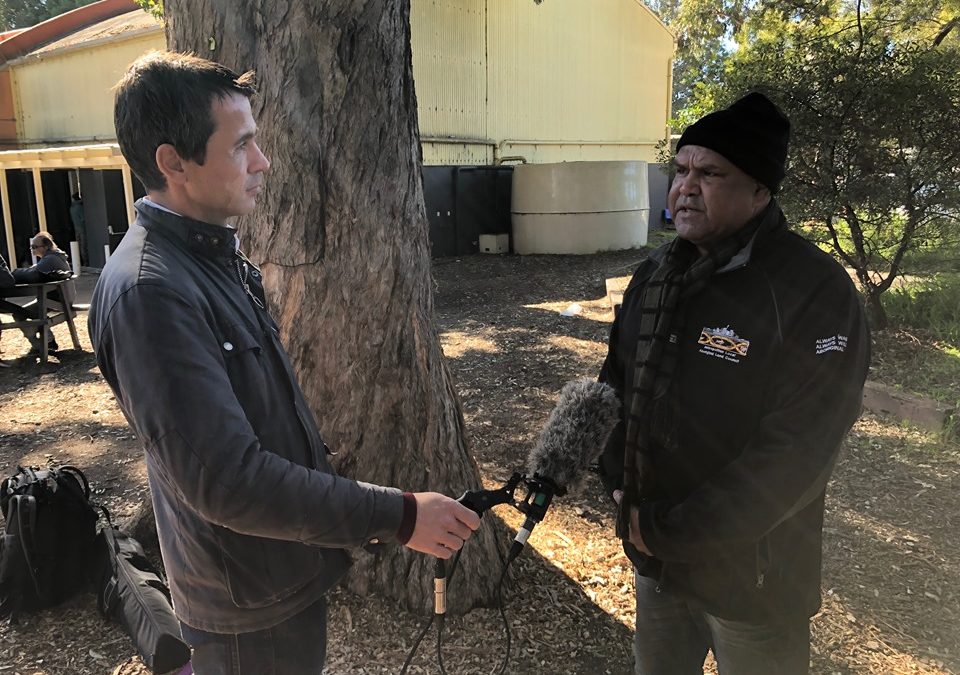 What makes the spirit of a place? One might sense it in the very ground itself, a right feeling in the earth, the trees, the wind, the birds… And, of course, in the people who are here with us, past and present at once. A right feeling, a good feeling. A good place to come together.

We’ve been running Community.a.Fair as a regular event in collaboration with local services, organisations and Inner West Council for the last five years. For the last three of those years it has been supported by Canterbury-Hurlstone Park RSL Club.

This special edition of Community.a.Fair offered a chance to connect with the history, culture and achievements of Aboriginal and Torres Strait Islander people. Over 300 people came from across Sydney’s Inner West and far further afield, filling Gumbramorra Hall and spilling outside over the gentle inclines of Gumbramorra Green.

The atmosphere was akin to a huge communal picnic, with people listening to open-spirited speeches, singing and dancing, and accessing the information stalls for everything from Connect Marrickville to Disability Services Australia and the Indigenous storytelling group YARN. Long, easy lines for the BBQ suggested the food was as good as it smelt and worth the minor wait. Children were catered for with face-painting, story-time and a jumping castle. All of it on offer for free.

A word like idyllic does not seem too exaggerated. Our world, and our country, can seem very messed up. One of the biggest struggles we have is to not to lose our sense of hope, or surrender to feeling isolated and unable to change a thing.

Days like today are enough to make you believe again in people power, in a warmth as fine and true as the sunlight coming down on this perfect Sydney winter’s day. The large numbers attending – and the heartfelt energy – showed just how strongly people want to embrace this opportunity.All of which reinforces the wisdom that one of the greatest political acts we can be involved in is simply to be present in a place and remind ourselves and others we are part of a community that cares. 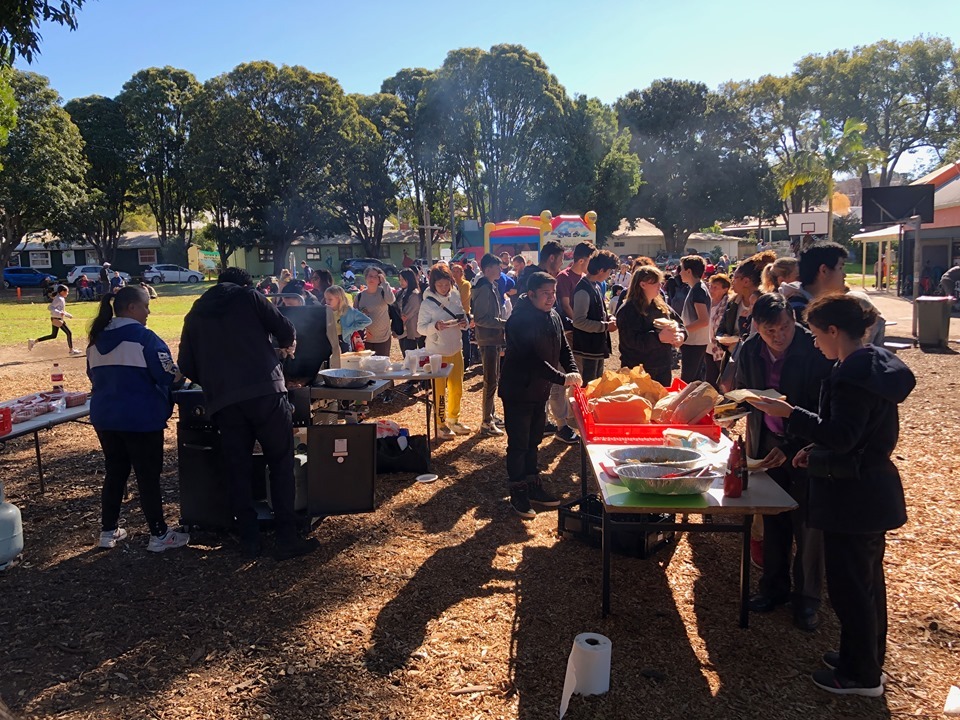 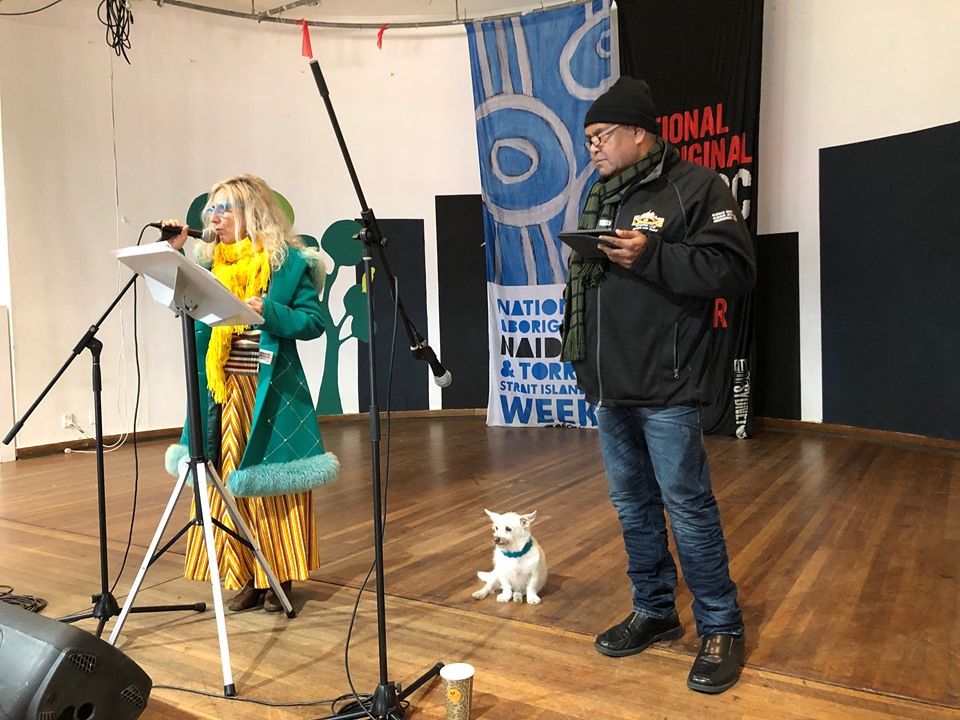 At 9.59am, literally one minute before our NAIDOC Week Community.a.Fair event officially began, news broke online in the Sydney Morning Herald that the Minister for Indigenous Australians, Ken Wyatt, was about to address the National Press Club to “outline his ambitions for a ‘consensus option’ to amend the Constitution in a formal commitment… to recognise the nation’s First Australians.”

According to the SMH report, Mr Wyatt was setting out “his plan to hold a referendum within three years to achieve Constitutional recognition and act on calls for a ‘voice’ for Indigenous Australians at the national level.”

On the heels of this breaking news, BBC Australia had already arrived at Addi Road to document our day. They were seeking out indigenous voices to give their opinion on the Morrison Government’s announcement. They were also trying to find a grassroots feeling for how indigenous recognition in the constitution might develop. What was this political move about? What did it truly mean to people?

Meanwhile, Addi Road’s CEO Rosanna Barbero was launching Community.a.Fair with an Acknowledgement to Country, recognising the Gadigal people of the Eora nation as traditional custodian and elders of the land we were on, past and present and future. Expanding on that greeting of respect, Barbero expressed a desire to “honour the courage it takes to make a new life in a new place, and the courage it takes to welcome newcomers.”

As she came off stage, Barbero was asked about the day as an Addison Road Community Centre Organisation initiative and why it was so important to celebrate NAIDOC Week. “It’s 2019,” she said, “and it’s about time we got the community behind the recognition of our colonial past injustices. And a recognition of 60,000 years. That this was and is and always will be Aboriginal land, and it was never ‘terra nullius’ like they claim. So our celebration is about equality, decision making and sovereignty.”

Colin Hesse, a Councillor from the Inner West Council (one of Addi Road’s main collaborators on the Community.a.Fair initiative) – and the host of Radio Skid Row’s Thursday morning breakfast show, ‘Close to Home’ – welcomed “those who are not wealthy enough to get tax cuts or benefits, and people who can’t afford to keep a roof over their heads or put food on the table for their family.” 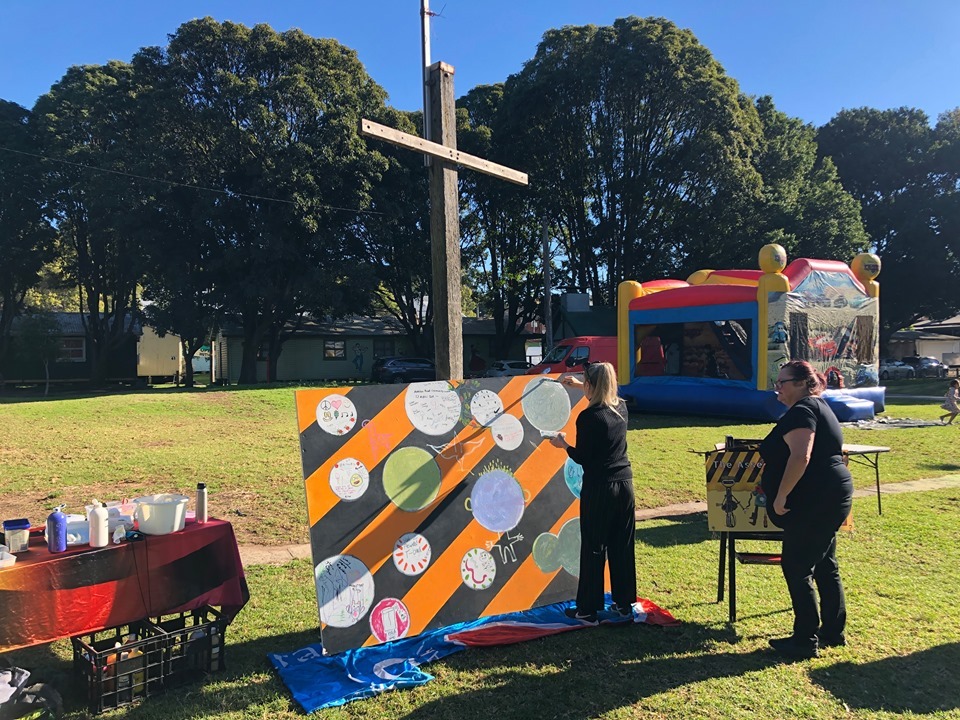 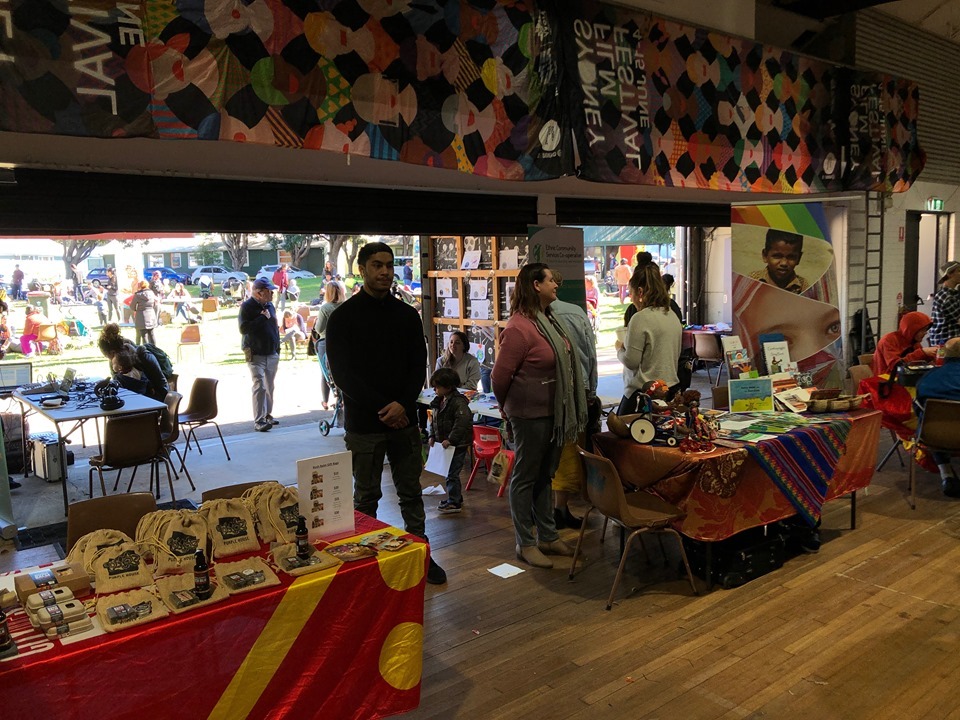 Allan Murray was a member of the Sydney Working Group that helped write the Uluru Statement From the Heart. He introduced himself not only as a member of that Working Group but also of the Metropolitan Local Aboriginal Land Council, and a long time local who had proudly played in his youth for “the great and mighty Redfern All Blacks”.

Murray had come to Gumbramorra Hall to publicly share the Uluru Statement From the Heart with everyone in a powerfully subdued reading. Before doing so, Murray talked about the work that went into writing it and the primary failure of the Constitution to recognise “First Peoples”. On the last point, he said, “plant life and animal life had a better weigh-in until recently than us.”

He then commenced his reading. Something about the opening phrases of the Uluru Statement From the Heart, where it speaks of “coming from all points of the southern sky” pulled everyone into the words. Largely because this was what people today had done, each in their own small way. Perhaps there was an understanding that the journeys being made were happening internally in each person’s life as much as any physical act of arriving here at Addi Road.

Those feelings intensified as Murray read on further: “This sovereignty is a spiritual notion: the ancestral tie between the land, or ‘Mother Nature’, and the Aboriginal and Torres Strait Islander peoples … We seek constitutional reforms to empower our people and take a rightful place in our own country. When we have power over our destiny, our children will flourish. They will walk in two worlds and their culture will be a gift to their country.”

Radio Skid Row broadcasted live from the event. Entertainment came from Felicia Foxx, who brought her glamour and a “special serving of Faboriginal fierceness” to the occasion. “Without my culture and my identity, I would just be another statistic to the government,” she said. “Thank you to Addi Road for having me here today and for giving me this opportunity to indulge in and share my culture and my identity.” 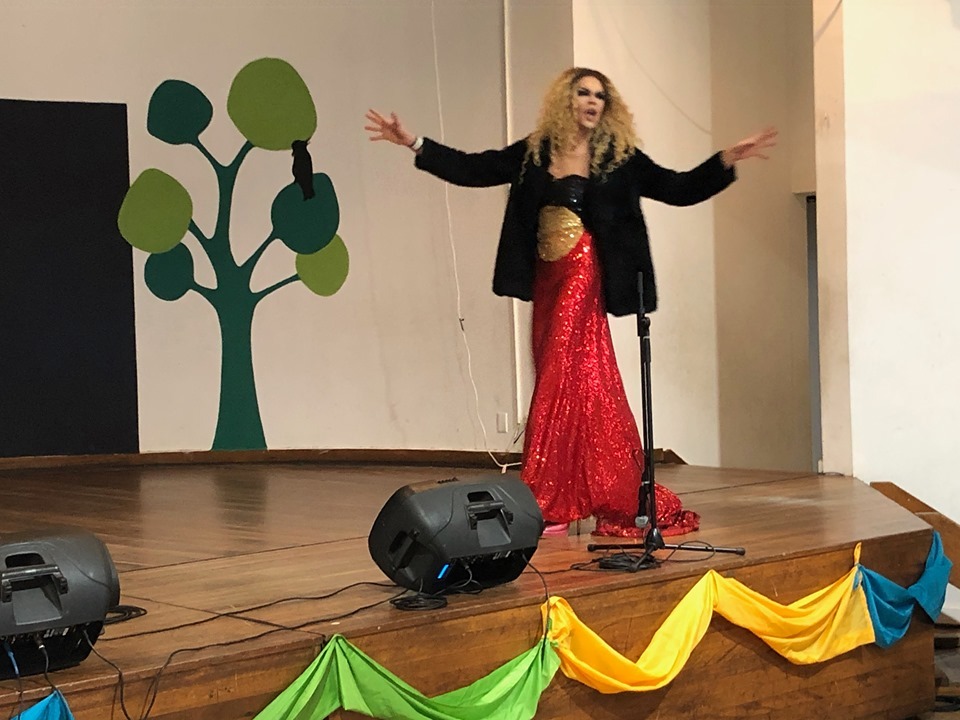 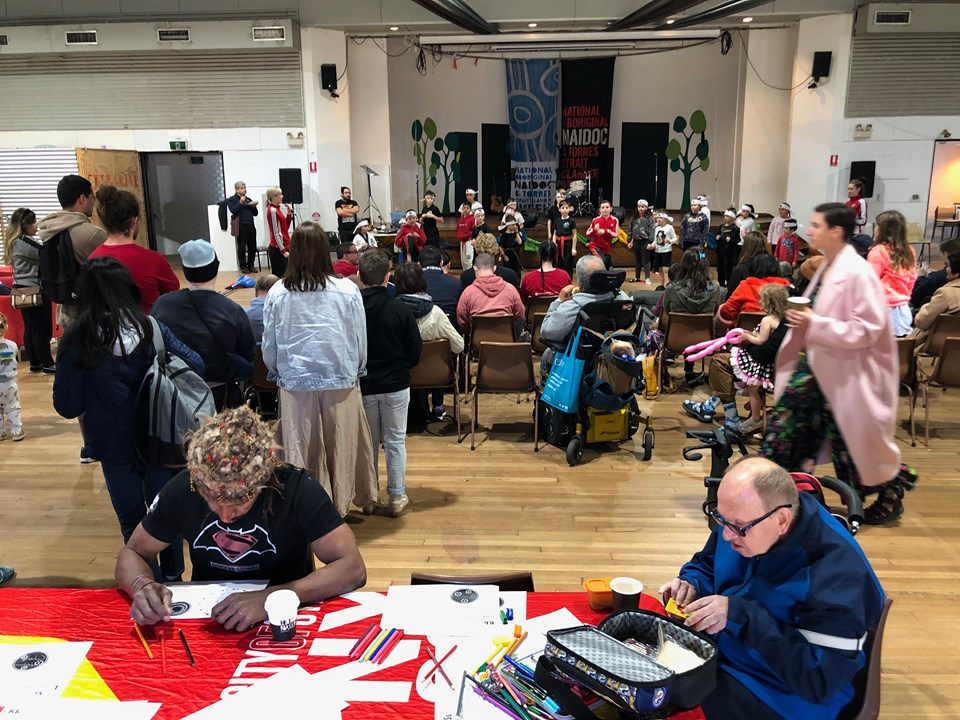 Rosanna Barbero, CEO for Addison Road Community Centre Organisation, announced details of the inaugural NAIDOC 2020 Addison Road Artspace Award:“Art projects may be works in any medium, including performance, to be exhibited in Addi Road’s StirrUp Gallery during NAIDOC Week 2020. The projects may be created by a solo artist/performer or by an arts collective or studio grouping, from anywhere in Australia.”

Words like ‘Reconciliation’ and ‘Multiculturalism’ can seem a little empty sometimes, threadbare terms too easily chewed up by speeches while precious time slips by. But the truly varied crowd at Community.a.Fair felt like a manifestation of those words, a better Australia being created right here and right now in front of us.

After his reading of the Uluru Statement From the Heart, Allan Murray was interviewed outside on Gumbramorra Green by the waiting BBC Australia crew. He told them, “We have to stop our youth being put in detention.” And reflected on Australia’s origins as a penal colony. “We still have a colonial temperament.”

“We have to remove the shackles, the chains. Our people have suffered enough,” Murray said. “We want to invite the Queen back to Australia to ask why she has kept First Nations people under the foot of the Crown?”

A recognition of sovereignty would provide the beginnings of an antidote to this history. “Policies have been put on us. Policies that stop Aboriginal and Torres Strait Islander people from having their own destiny, their own self-determination.” It was not so difficult to understand, he explained: “As a people, we want to be standing tall and free.”

As Murray spoke to the BBC Australia crew, the Community.a.Fair day at Addi Road moved on around him, smoke from the BBQ drifting across the ground and those perennial Inner West aircraft swooping low and loud to break the conversation. Children of all backgrounds and ages stood watching Murray speak quietly, not grasping a word, simply curious about these men and their cameras and whatever was going on. A great tree shaded everyone and as the crowd moved, it seemed to echo the intertwining branches of the tree itself. It was the heart of NAIDOC Week in the Inner West of Sydney. It was a very good day to be together here. 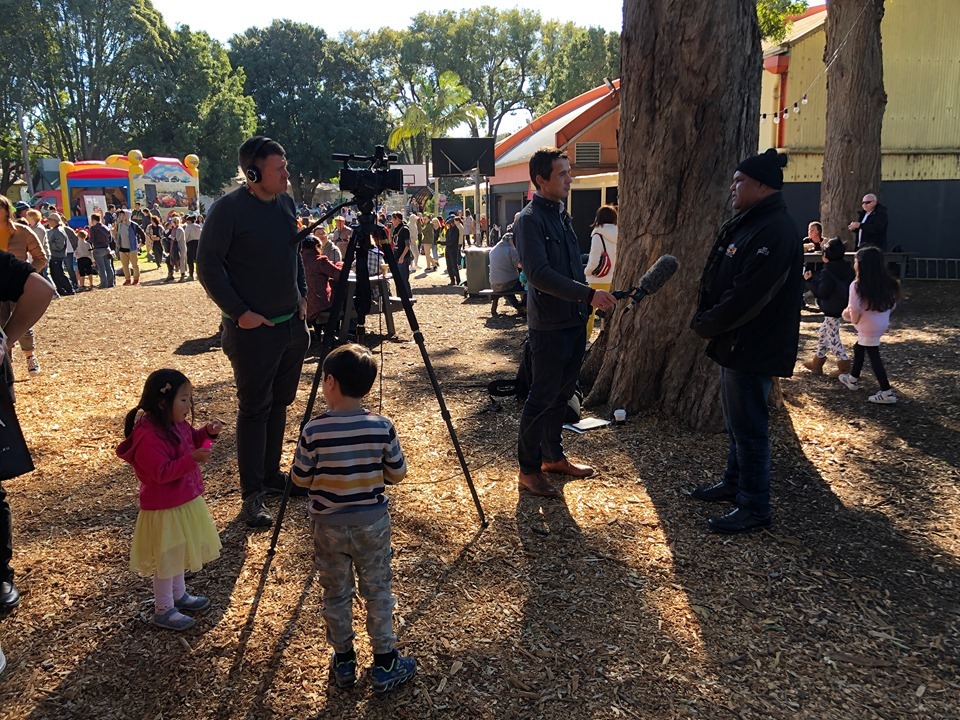 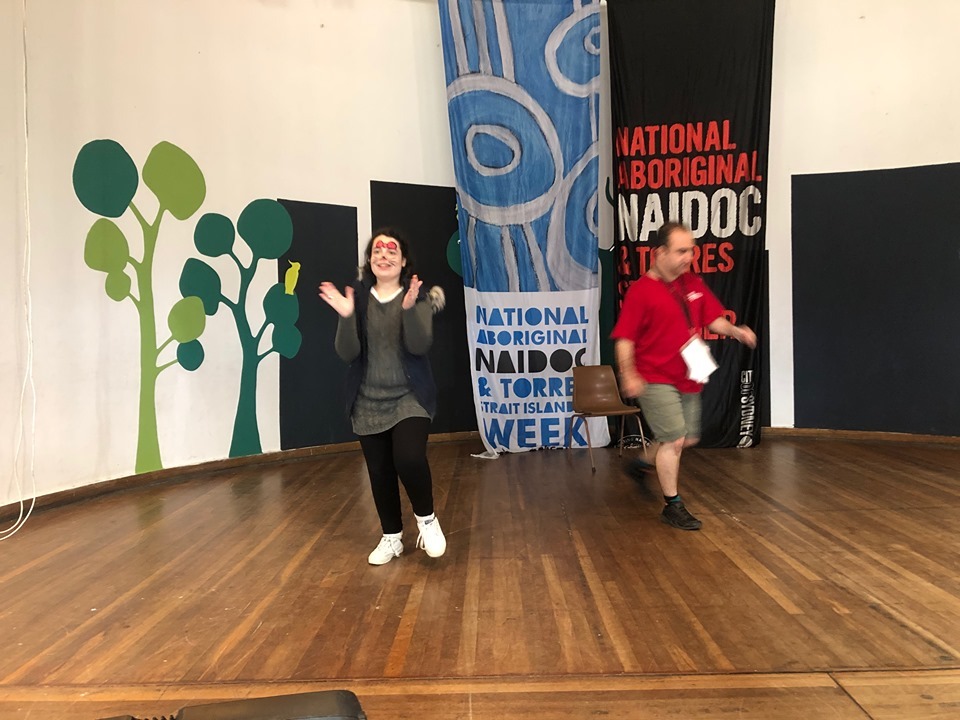 With a very special thanks to… 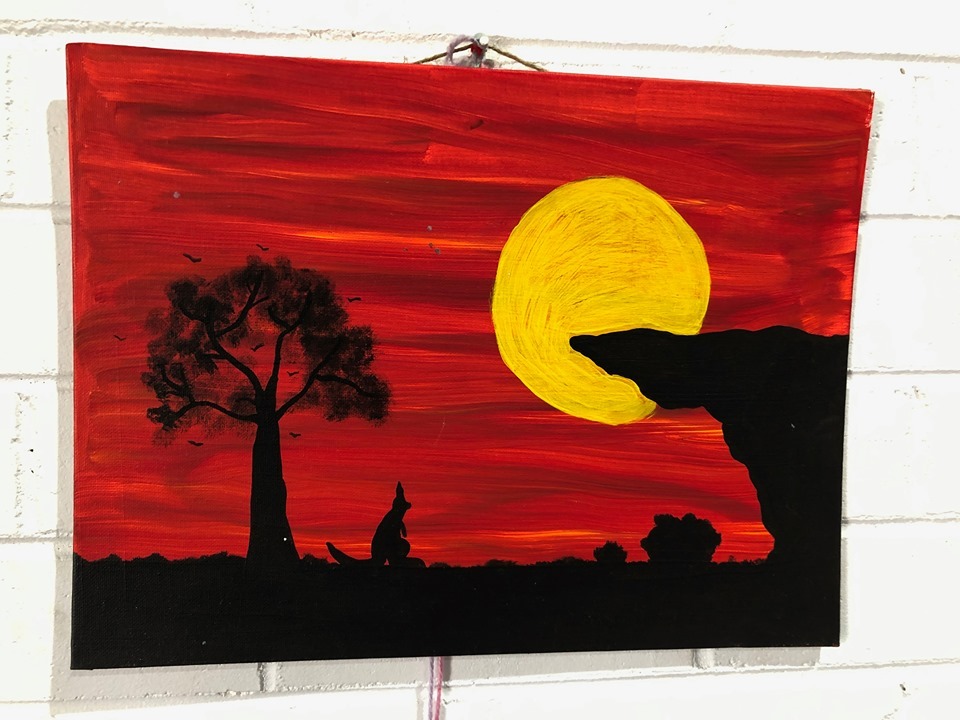