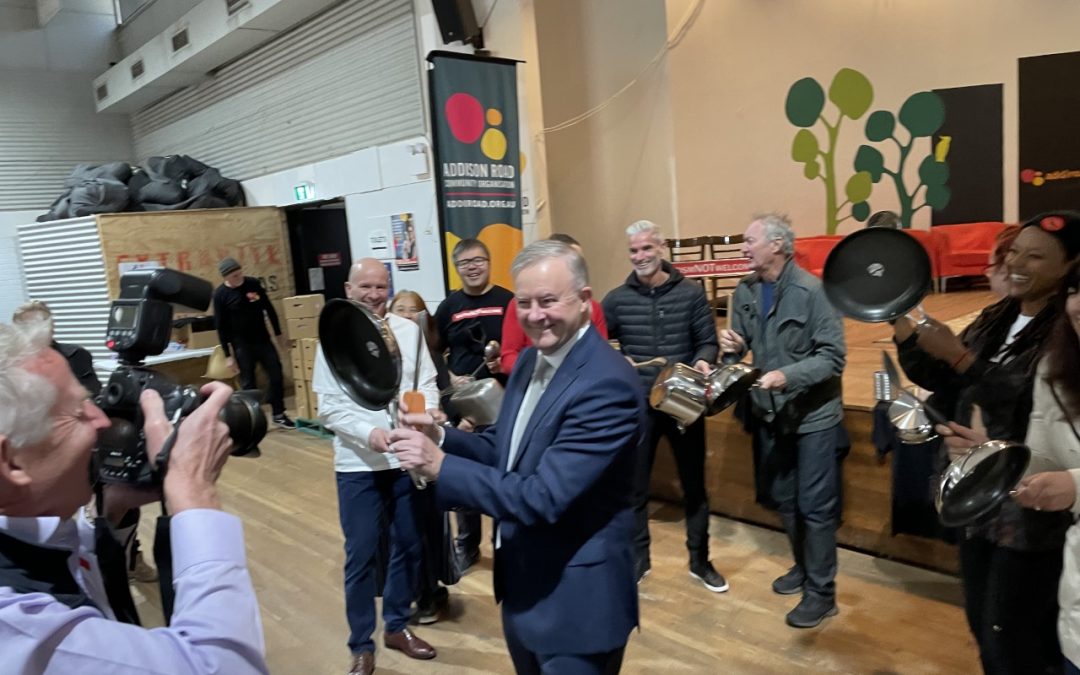 Anthony Albanese came down to Addi Road early on a winter’s morning this week to bang the drum – or at least beat the daylights out of a good non-stick frying pan – and announce the construction of our new solar-powered zero-waste community kitchen.

As Mental As Anything’s ‘Let’s Cook’ blasted over the PA system in Gumbramorra Hall, Albo was joined by people on pots-and-pans playing along. While posing no immediate threat to the Sydney Symphony Orchestra, the percussive line-up of the spontaneously formed ‘Addi Road Experience’ made an enthusiastic impression.

Supported by a grant from Coles Nurture Fund – with rescued food to be supplied by SecondBite and local business donors – our new kitchen is worth making a big noise about.

It should be up and running by December and will supply freshly cooked meals to people in need across the Inner West through our Addi Road Food Pantry in Marrickville and our sister store in Camperdown.

They were joined by a host of others on everything from wooden spoons to egg beaters, bowls, tongs and ladles. Rumour has it Bryan Brown was asked to turn down the volume on his cooking pot and spoon. Just a bit too much heavy metal! 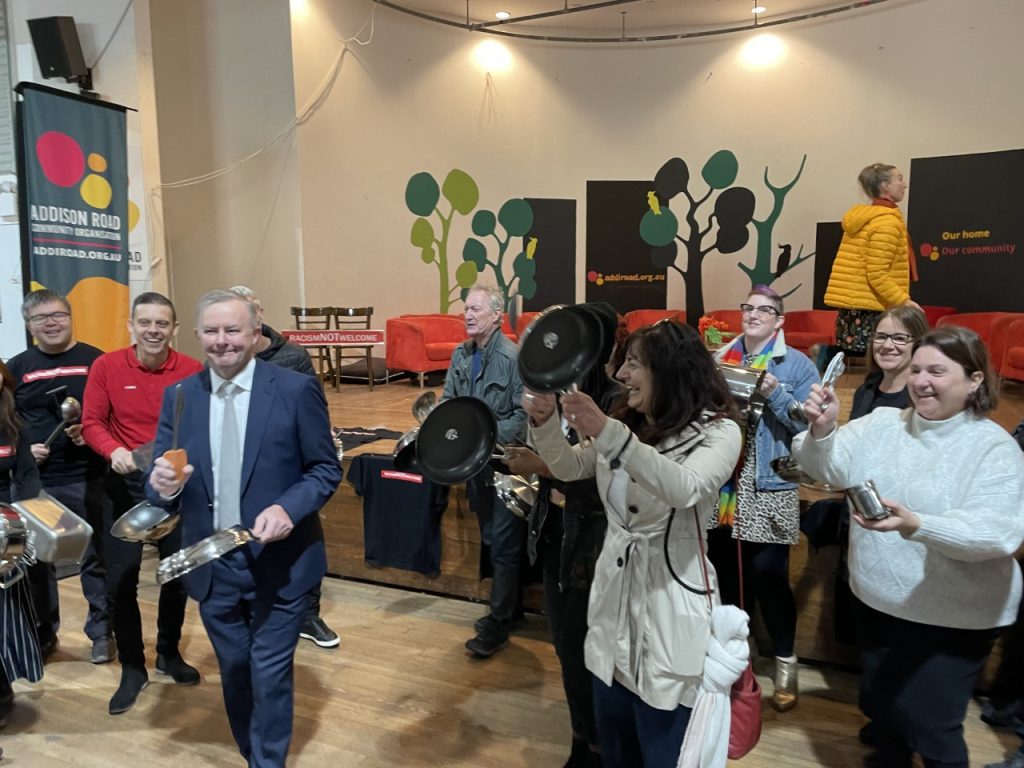 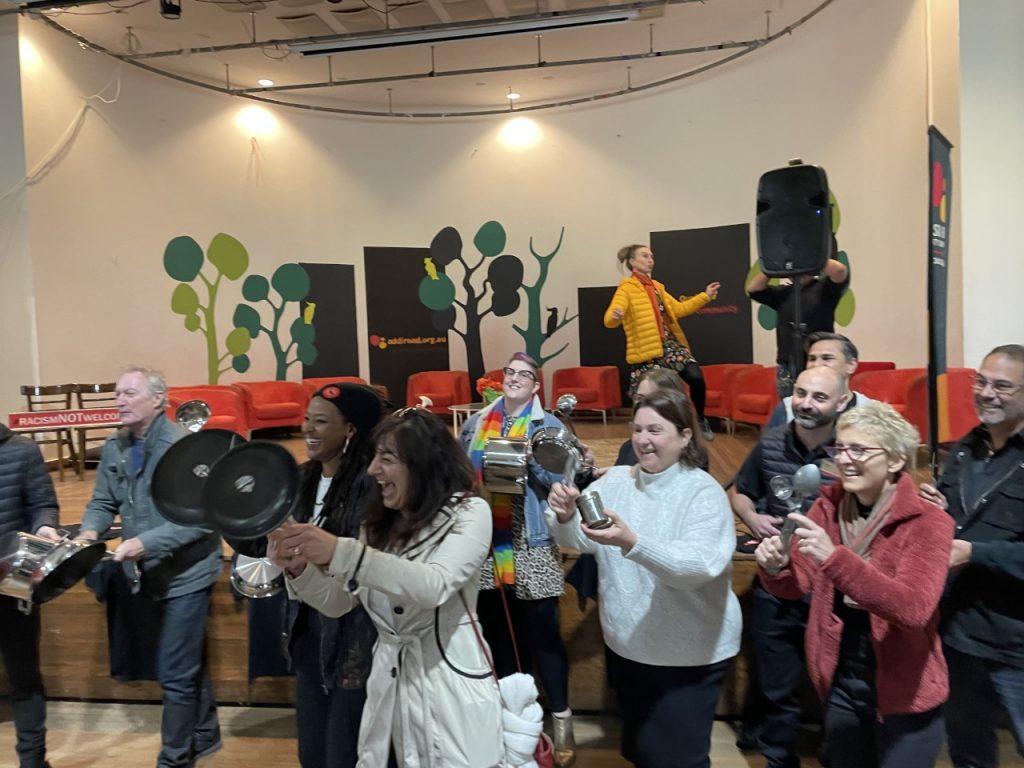 All the shake, rattle and roll to ‘Let’s Cook’ capped off an inspirational morning of speeches about what promises to be a major step forward in Addi Road’s environmental and social justice work.

Stepping up to the microphone first, our CEO Rosanna Barbero modestly described Addi Road as “a small community centre”. “But it’s really a country called Australia in nine acres. And something like today shows what we can achieve whenever we work together. That means our volunteers; our team here at Addi Road; our Federal Member Anthony, who has been such a champion for us; all our donors and supporters; and especially our partners today, Coles and SecondBite.”

She emphasized how essential the Coles Nurture Fund is to making the zero-waste kitchen possible. “Coles Nurture Fund usually funds agriculture. They don’t usually fund the end of the process. I want to thank them for believing in environmental factors and caring about them – at the beginning, and at the end – with all the food that is produced.”

Rosanna also praised SecondBite as “the quiet achievers in food rescue work. You rarely see them claiming the work that they do, which is making sure nothing goes to waste. Yet they’re the biggest in Australia. They’re always there, right beside Coles, working with them like elves to get food to places like the Addi Road Food Pantries.”

The ‘elves’ comparison cracked everybody up, but what Rosanna wanted to make clear is that “the connection between Addison Road Community Organisation, Coles and SecondBite is not a new relationship, it’s a continuing one.”

SecondBite has been supplying an average of eight pallets of food per fortnight to our Food Pantry since October 2018. As well as helping feed people, this means that Coles and SecondBite’s partnership with Addi Road had so far prevented over 253 tonnes of food from being wasted and decomposing, releasing greenhouse gas. 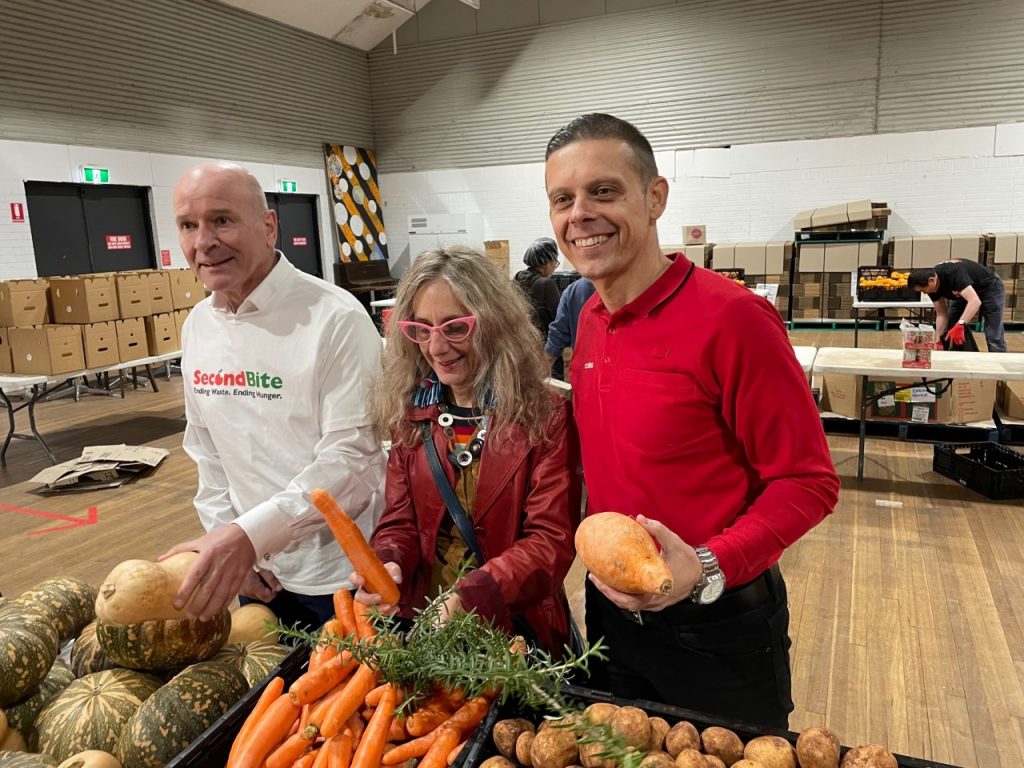 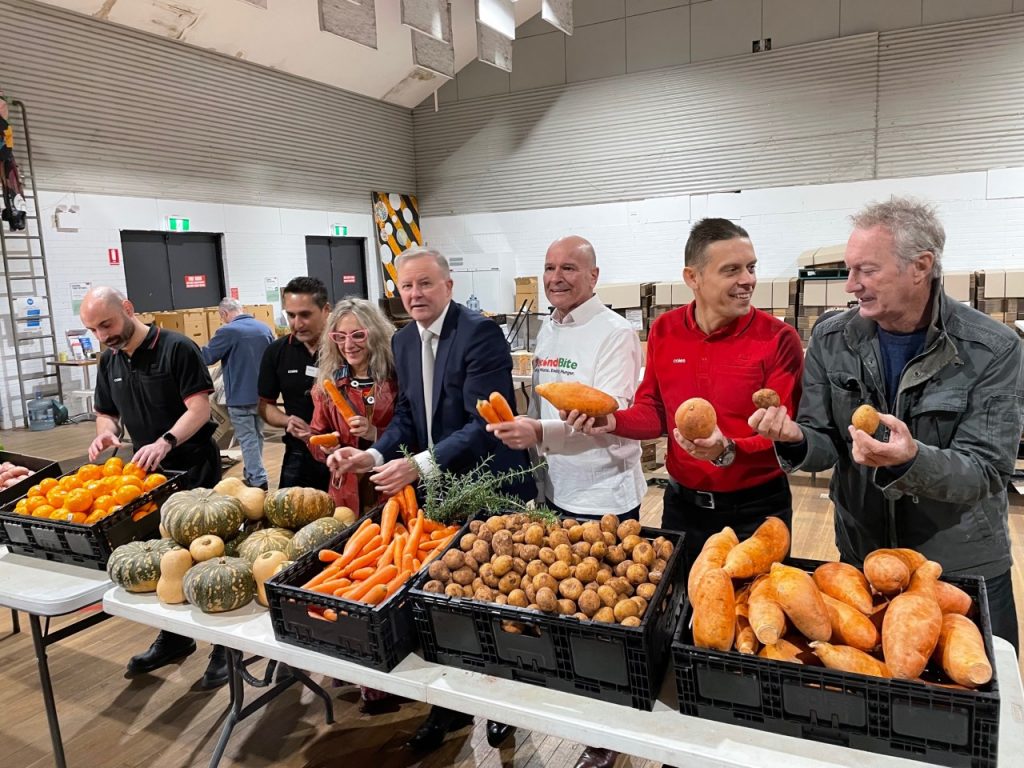 Rosanna also thanked Amanda Kane from the NSW Environmental Protection Authority (EPA) for “visionary work in making sure organisations in Sydney and all of NSW are well-equipped and strategically able to rescue food and divert it to people in need.”

“Our zero-waste kitchen will not only run on solar, it will help train refugees in cooking and provide breakfasts for children at local schools, as well as provide cooked meals using rescued food and helping the environment.”

Ivan Slunjski, Coles State General Manager for NSW, completely backed Rosanna’s thinking. “We want to be the most sustainable supermarket in Australia. By helping to fund initiatives which increase local production and enhance the environment, we aim to drive generational sustainability in Australia.” He reinforced local community-building too with the opening of a new Coles store in Marrickville “just down the road”.

Anthony Albanese defined Addi Road as an Inner West icon and “the physical embodiment of a spirit, a state of mind, which is about helping others. Giving people a hand up, as well as a hand out.”

He reflected on “the extraordinary history” of Addi Road dating back to World War One “when it was base for Australians going across the sea for what they thought was going to be a great adventure.” Half a century later Australia was being transformed by waves of migration. Now Australia was seeing people arrive and Addi Road was once again a vital turning point.

Opened in 1976, Addison Road Community Centre it would become the home of multiculturalism in Australia thanks to the vision of many, including Labor prime minister Gough Whitlam and his minister for immigration Al Grassby.

He acknowledged how much gentrification has changed the Inner West since that time, as well as how easy it is for challenges within the community to be obscured by the rapid transformations going on. “Real estate prices are through the roof,” he said. “Yet Grayndler has the largest number of boarding house residents in any electorate in Australia.”

Anthony Albanese’s point is that history has a way of revealing deep and long-term relationships. He looked to his own background as the child of a single mother to explain the significance of food and what a zero-waste kitchen means to him, both politically and personally. “With mum, nothing on the plate was wasted. It was just something you did not do.”

He thanked Coles for their support of the kitchen and their “commitment to making a positive difference in the community”.

Living sustainably, working in better ways, and the journey we have to make to achieve that goal, was something that needed to be done “in a way that brings all the community with us,” he said. “A major corporation working with a community organisation” is a great and very practical example of this for everyone.

In closing, he took time to especially thank Craig Foster for lifting the profile of Addi Road and for the social justice work which shows how “our community is strengthened when we work with refugees and different multicultural communities”. 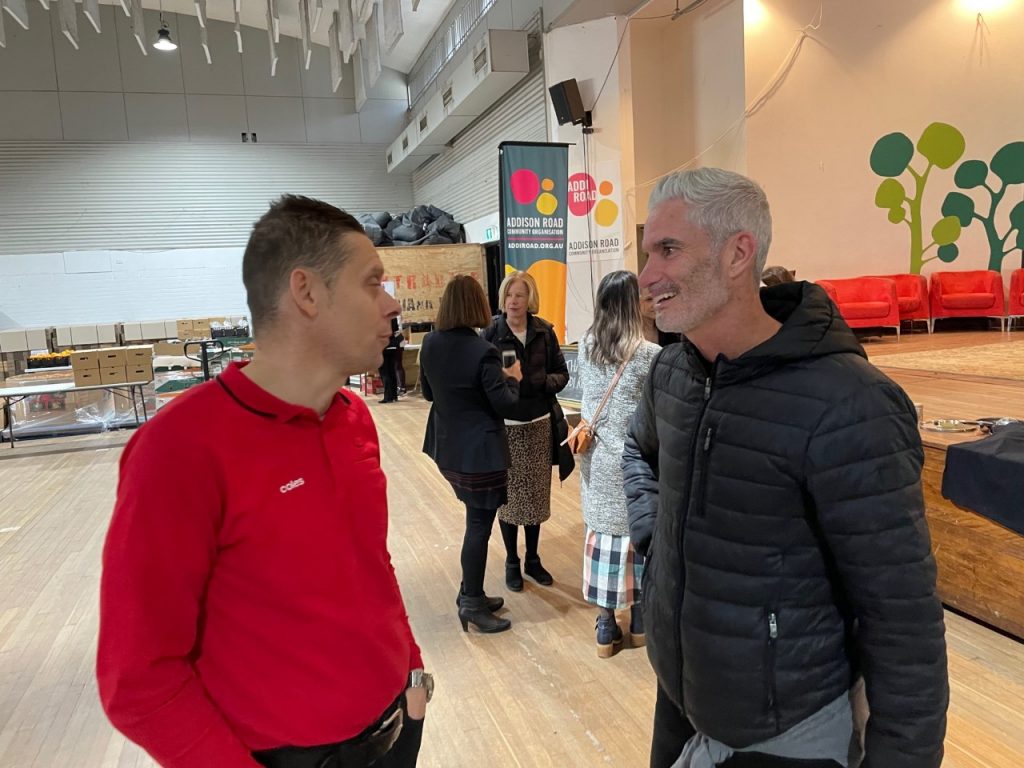 Craig Foster thanked Anthony Albanese and [his manager] Sue Heath for coming down to the launch, as well as Coles’ Ivan Slunjski and Chris Cameron. He remarked on the new Marrickville Metro Coles and told Ivan and Chris, “We’ll be shopping there now, brother!”

Then Craig reiterated the messages and spirit of the day: “This place is all about leadership. It’s home to everyone from the Greek Theatre to the Aboriginal Womens’ Legal Service and services for asylum seekers.”

He spoke of his growing involvement with Addi Road through his #PlayForLives campaign and #HampersofHope this last Christmas. As Craig explained, the original goal was to create 1,000 gift hampers for people in need during the holiday season, not just feed people, but make them feel included and special at a special time of year.

“It took a lot of logistical work, especially for a sports person and an actor,” he joked, referring to himself working with Bryan Brown. “It brings challenges. Damien [Moore, Food Pantry Manager] is a logistical man and he nearly had a coronary!”

As word about #HampersofHope spread and all kinds of groups began arriving at Addi Road, Craig told of how our CEO Rosanna Barbero would always say yes to the people arriving. The 1,000 hampers became 1,200 to meet this growing need at Christmas. “Those extra 200 hampers are what Addi Road is really about. Not just doing enough but doing what is necessary.”

With the building of a new solar-powered zero-waste kitchen thanks to Coles Nurture Fund, Craig could not be more excited now for what the future holds. “Good people from every single background are here every day,” he said. “Addi Road is a leader in sustainability, in climate action, in social justice, in community.”

Come Christmas we will be saying ‘yes’ again. Let’s cook. 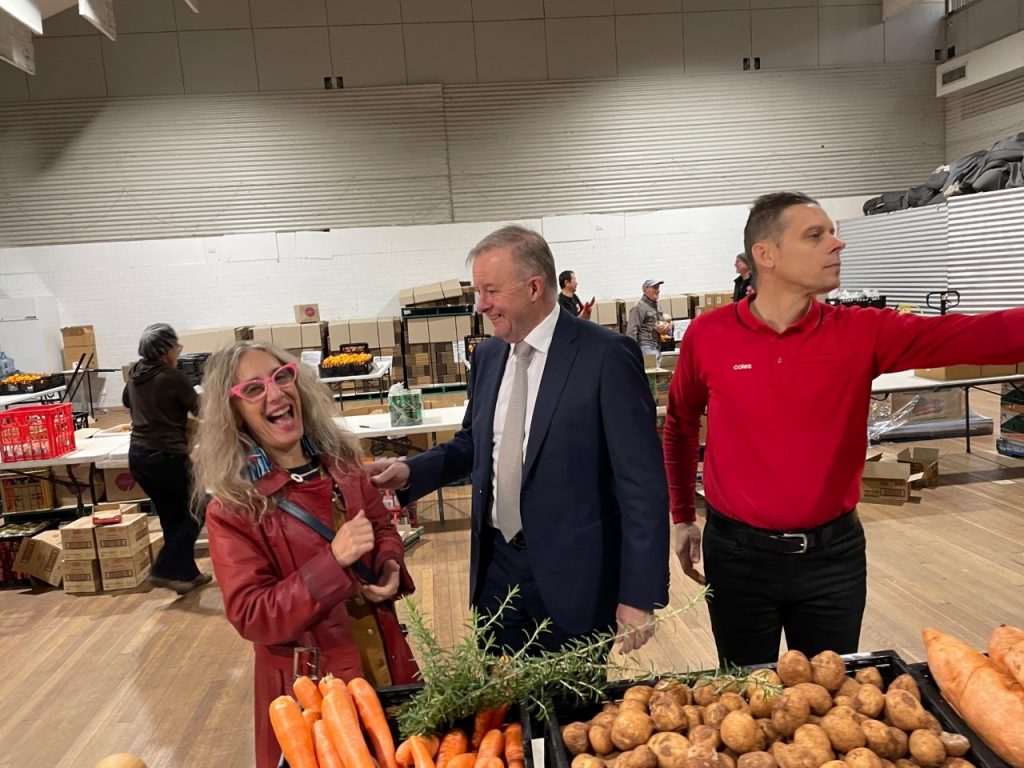 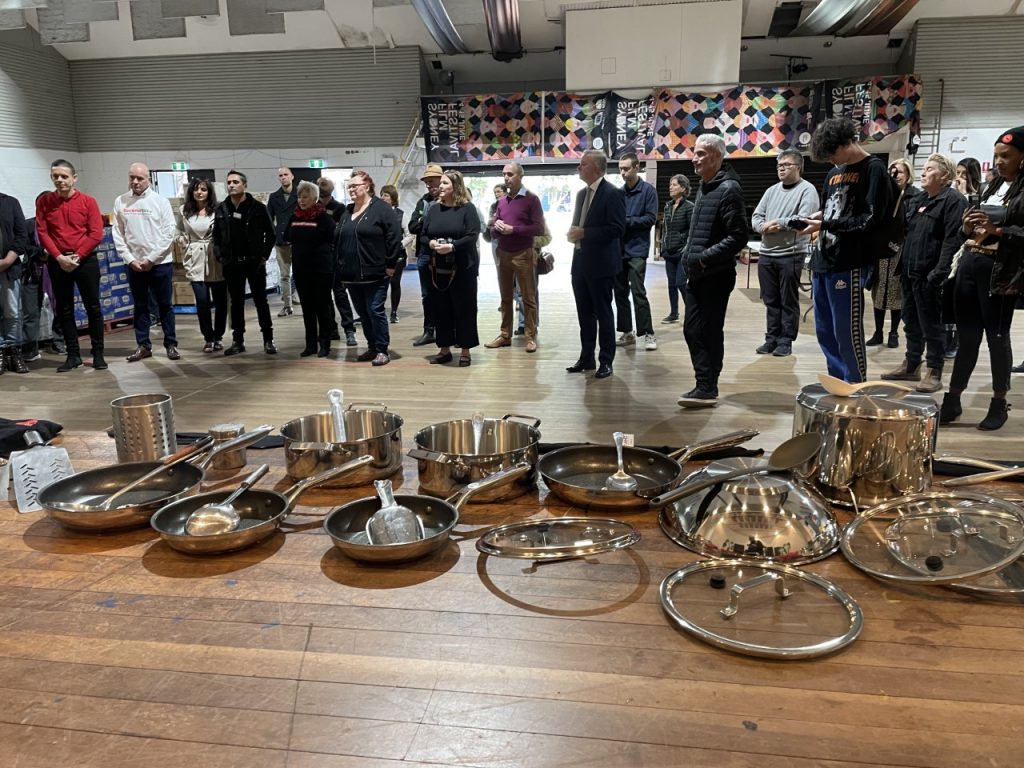 Getting ready to bang on at the launch of Addi Road’s zero-waste kitchen. 7 June 2021. Photo by Mark Mordue.