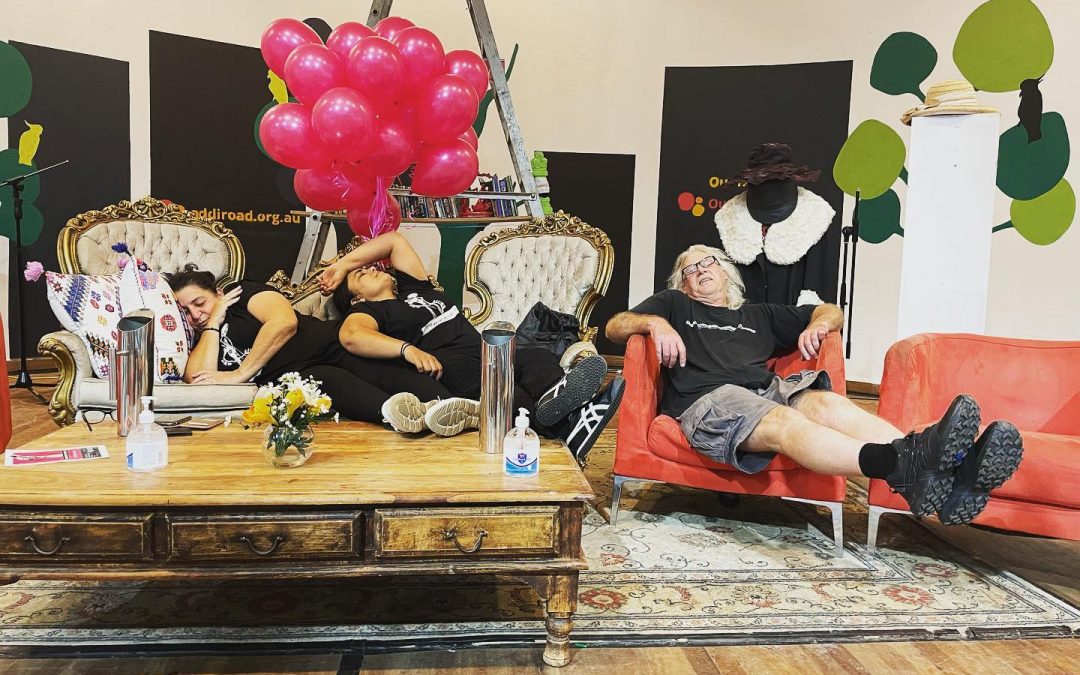 Addi Road Writers’ Festival 2022 is over for another year. All that’s left to do is pack up a few chairs and clean Gumbramorra Hall and the Greek Theatre, although we did most of that last Saturday night as a full moon rose over us.

It really was some kind of great day. Almost 40 writers, journalists and thinkers on twelve panels in two venues; another dozen musicians, activists and spoken word artists appearing in ten-minute ‘hotspots’ to blast a feeling or idea into the proceedings. And some 400 people attending to witness it and enjoy the festival. Not to mention our staff and volunteers, and the team we assembled as a crew, who made it happen and kept things flowing, giving their all to the occasion. And a little bit more besides.

It should be noted the ARWF2022 is a completely independent and community-driven effort. This year we were supported by a $10,000 grant from the Inner West Council, which helped us a lot. But a day this big comes with an even bigger investment in energy, time and resources from a community centre like Addi Road.

So why do it? Because it engages us on a whole other level with our community…. through poetry, writing, conversation and all the related arts. And it does so at a time when ‘culture’ has been a unifying, consoling and healing force in spite of the pressures and crises we have had rained down upon us over the last two years. Our writers, musicians and artists have suffered economically, and in other ways, under the same duress. And yet something in the creative spirit, some push to be human – and speak of human experience and communication – impels them to keep working.

Over this same time Addi Road has become very well-known for its food justice programs and heavy involvement with bushfire and flood relief, as well as supplying hampers to people in need when entire suburbs were shut down during pandemic lockdowns or individual households battled with illness and job loss. In the meanwhile, we have continued our social justice, policy and human rights work: from lobbying against inequality and helping the unemployed to our involvement with the rescue of 15 young women fleeing Afghanistan as the Taliban took over their country.

One of the great beauties of Addi Road as a community organisation is its elastic and dynamic nature. The way we are big enough to do many things; but not so big we are paralysed by bureaucracy and unable to move quickly or adapt to individual and often urgent appeals. We do what what is needed; when it is needed. We also run an art gallery; and we support many tenants on site with subsidised leases that allow them the spaces to do everything from creating their art to running a community radio station to working with multicultural communities in appropriate ways. Project after project; partnership after partnership. All of it meeting the needs – and propelling the energy forward – of our community.

It’s impossible to repeat all the content of the Addi Road Writers’ Festival 2022 here, but some of the panel titles might enough to conjure the relationship we mapped between writing, storytelling and our own active place in the Inner West:

‘Breaking the News: Frontlines so close we fail to see them‘ …. ‘Drug Talk – How we do drugs. And how drugs do us‘ …. ‘The Body Politic – Sport and social justice: a new awareness in play‘ …. ‘Escape From the Land of Bad Dreams – How poetry can reshape your world‘ …. ‘The Changing Man – Boys into men: journeys and voices‘ …. ‘Drawing Your Own Bed and Lying In It – Autobiographical comics and the graphic art of self-determination‘ ….

It reads a little like a news ticker-tape scrolling through the underlife of what is going inside our community and in our minds and hearts. And it is barely even a half of what was happening at the festival on a single day.

Artistic Directors Sheila Ngoc Pham and Mark Mordue were looking to “reboot the idea of what a literary festival can be” with Addi Road Writers’ Festival 2022, as well as building on its beginnings and open spirit last year. Beginnings that involved writers and artists donating their time for free to launch the event and put it on the map, which it now surely is thanks to this second incarnation. Between last year and this year we have begun to secure basic funding thanks to Inner West Council, doubled the content of the festival itself, been able to pay our writers and artists, and seen our audience size triple. It really was a buzz.

In tribute to that collective spirit here are a few photos taken by organisers, participants and audience members. They’re a family photo album really. We will post a set of images from our official photographer, Bleddyn Butcher, very soon. But it seemed a good idea to share vision of the day from those who were wedded to it and making it all that it was.