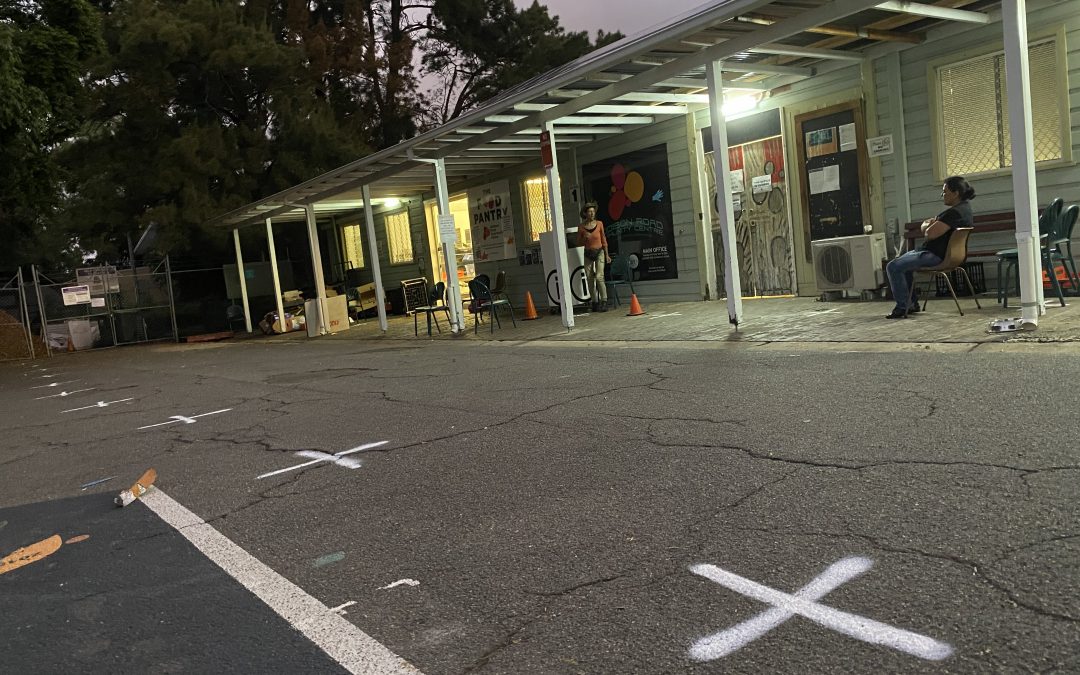 Day ends at the Addison Road Community Organisation. Gurwinder starts to take the chairs from the road, leaving only the white crosses that now mark out the social distance needs of our times.

Addi Road’s Food Pantry works as a super low-cost supermarket for people in need. Lately, things have gotten busier, so we have tried to offer our customers a little music while they wait outside, spaced apart on those chairs… A banjo player with her own folk songs just the other day. And soon, a busker with a small African drum that he says has the ability to make people smile.

Across the carpark, our community hall has been set up as a food relief distribution point for the city and its charities. People are inside putting together emergency hampers to keep peoples’ lives on track, shipping out hundreds of boxes to civil society groups getting smashed by need in the Covid-19 Age.

The footballer and SBS commentator Craig Foster has been summoning up volunteers from the sporting community for us through his #PlayForLives campaign. Tomorrow he’s using his celebrity muscle to bring some television news in to take a look around and spread the word about our work. In the meanwhile he makes time to pack box after box after box himself. How does he have such energy?

Anthony Albanese swung by yesterday. He is looking at what can be done in bigger and better ways to meet the virus as it spreads and affects our society. Planning, steadiness, structured approaches and, with them, a calmness that maintains people’s confidence – these are the goals that concern him now. He makes everyone in hall with Craig Foster feel like they’re doing more than just good things for today. He gives them a sense that they are laying down tracks others can follow.

Outside later in the twilight, Diwass and his two workmates arrive. Just a group of boys in a small car, doing the rounds of the Return and Earn machines that they clean across the city. Other people have arrived in cars with garbage bags full of bottles and cans to recycle. Some come with shopping trolleys, looking like the know the streets inside out.

The sculptor Barbara Licha dropped by earlier. She has a studio in the grounds. She makes figures out of wire, buildings out of wire, suggestions of an entire city that she calls ‘the Silk Webs’. All her work seems to be about a dance between loneliness and isolation, and the joy of more solitary freedoms.

Shiri is moving across the car park with her wheelbarrow full of cuttings and soil. She does not believe in using machines while she gardens here. All things best by hand, slow and close.

Rosanna, the boss here, has gone home. She is usually the last one to leave by many hours. We worry about her like you worry about a captain who keeps going twice as strong as anyone else. As Addison Road Community Organisation steps up to meet the city and the need to feed so many people who are poor, disabled, old, and isolated, she keeps her plans for Addi Road’s Emergency Food Preparedness and Response Centre evolving and growing.

When she gets angry at people being selfish or unhelpful she calls them “the fuckers”. It’s kinda funny. She’s worked in war zones. She knows what she is doing. One fight after another.

This place is a story woven out of everyone who works and volunteers, all those who come here for help or to give. A real factory of life. The lights are on and everyone is gone – or soon will be. Gurwinder takes the last chair from the last white cross. The night’s early wind gusts up. It’s a good place to be. A place that feels alive even when no one is here.