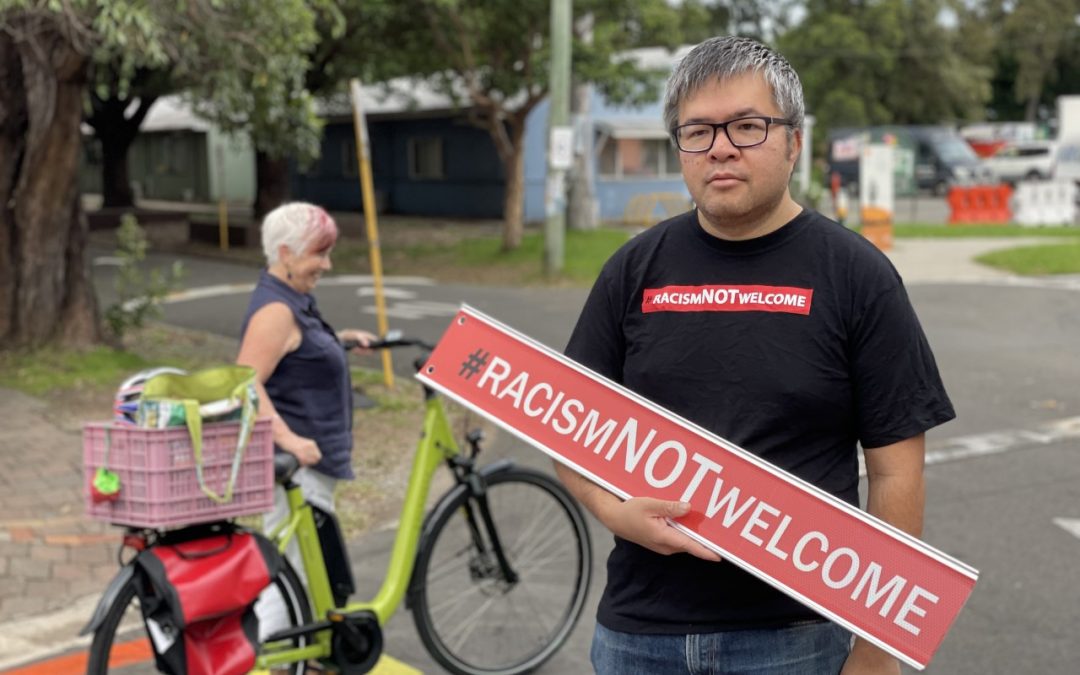 It’s International Day for the Elimination of Racial Discrimination. Down at what’s affectionately known as Addi Road in Marrickville, a community is weaving itself together, celebrating the day despite a drizzly early morning start in Sydney.

Osmond Chiu sits on a low wooden verandah after having done his bit for the Addi Road photo shoot. He’s a bit unclear as to whether he was Ringo Starr or Paul McCartney in the line-up. But he is happy to provide his own drum beat and melody to the day either way.

A Research Fellow at the Per Capita think tank, Chiu is a rank-and-file representative on the NSW Labor State Policy Forum and the Chairperson for Inner West Council’s Multicultural Advisory Committee. All around him people are carrying #RacismNOTWelcome street signs, or wearing black t-shirts emblazoned with that message. The signs stem from a campaign he helped initiate through a ‘2020 Covid-19 Coronavirus Racism Incident Report’ that he helped research. It was dubbed ‘I Am Not a Virus’.

The street sign campaign is most immediately manifest around Sydney’s Inner West at key locations where they were raised for the first time in Australia just over a year ago. They flag what the community stands up for, driving conversations and awareness. They’ve also generated enough unease to see a concerted, if ultimately unsuccessful move to see them taken down again in the Woollahra LGA, a motion defeated at their Council meeting in February.

Together with Addi Road CEO Rosanna Barbero and social justice advocate Craig Foster, Chiu has played a central part in turning the local #RacismNOTWelcome street signs into a national campaign. So far the street signs have been taken up by 22 LGAs across the country in the last year, as well as all of NSW TAFE institutions and many schools. Barbero praises Chiu as “an inspiration. He is really quite brilliant. An intellectual who is action oriented. He brought what was happening during the early stages of Covid to everyone’s attention.”

International Day for the Elimination of Racial Discrimination is an obvious chance to celebrate the signs and reaffirm their value, even if they can run a little sharply against some people’s feelings. When you learn that this particular day has been rebranded in Australia (back during the Howard era) as ‘Harmony Day’, the only country in the world to change the official United Nations title, you begin to see how a few street-sign reminders about racism might feel necessary to campaigners supporting their role in raising public awareness.

Elaborating on that theme, Chiu says his political and social role as Chair for the IWC Multicultural Advisory Committee involves “asking one another what the modern agenda is for multiculturalism?” He and Barbero met and combined forces on this committee in the wake of her own work as Chair for the Inner West Multicultural Network. Wider agendas came into play between them. “Funding for multiculturalism tends to mean festival and cultural events. And service delivery. They are very important, of course. But it can get very one-dimensional. It doesn’t really deal with the challenges that people from diverse cultural communities face. The Covid pandemic really brought that home. The massive increase in racism experienced by people, most prominently Asian Australians.”

A considered, almost reticent speaker, Chiu chooses his words carefully. When pushed on criticism the signs are upsetting, he responds in a way that is both even and firm. “Well I think the criticism of the #RacismNOTWelcome signs almost justifies them. It shows how uncomfortable people are talking about it as a real issue. They want to pretend it doesn’t exist.” Gaining energy as he speaks, Chiu pushes forward a little harder. “People think racism is just about really horrible nasty people. That it is all about malice and ill intent. But it’s actually deeper than that. It involves systemic issues in this country we really need to address.”

Systemic issues like what? Chiu replies “well representation in institutions, for one.” He has done comparative research for Per Capita on the representation of people of colour in politics in New Zealand, Canada and the UK. Australia falls well behind the other three. “There’s also a more casual racism,” he says, “that is so normalised in Australia people can’t even see it. There is this terrible mismatch in this country between the entire idea of Australia and the reality of what Australia actually looks like.”

It all sounds fair enough, yet also like a strong political speech that is missing some core truth to really connect it. How does it all boil down into Chiu’s own life? Are things really that bad? “How do I put this personally?” Chiu asks rhetorically. “For me one of the real challenges of last few years as a Chinese-Australian is just the struggle I have to explain when something is racist. And it isn’t a Left or Right issue either. I have to explain to people, regardless of their political persuasions, what is racist and what is not racist.”

“Someone like me always has to ask the question, what is the potential cost of what I say? Because of the Chinese diaspora, because of global concerns about China, because of China-Australia relations. Things can get taken out of context and be misconstrued easily.”

Chiu’s phone buzzes and he answers various texts inbetween the conversation. There is a feeling today’s world is already pressing in on him as we get closer to his 9am departure deadline from the ‘Addi Road meets Abbey Road’ shoot. “You want an example,” he says. “I can give you one that people might know about. I appeared before a Senate inquiry giving evidence on the participation of people of culturally diverse backgrounds in politics. And the question I got from a Senator was, ‘Do I condemn the Chinese Communist Party?’ No real questions about my evidence or my main submission. For me that one question from the Senator sums up the current political environment. It was clearly a loyalty test, and an attempt to trap me. It was pure McCarthyism.”

Did Chiu feel shocked? He almost laughs at that suggestion. “It was surreal,” he says. “At an abstract level I understand how bad the debate is here. But that brought out to me how shameless it is too.”

Given his analysis and his experience of politics, it’s surprising Chiu does not perceive the situation in more hopeless terms. Why become involved at all? “I don’t feel hopeless,” he says, picking up his iPhone again and jabbing out another text. “It’s the kind of thing that drives me to stand up and fight back. If I accepted that treatment and stayed quiet it would have given permission to that kind of behaviour. So at least it is now seen as publicly unacceptable to try that.”

His parents must be proud of him? Chiu seems uncomfortable with the observation. He explains these kind of issues are not much a part of extended family conversations. “My dad just tells me to be careful.” What his father most cares about is that his son is happy – and safe. Chiu broadens the conversation away from family and back to society at large, to the International Day to End Racial Discrimination, to his work in local government and the #RacismNOTWelcome street sign campaign.

“Someone like me always has to ask the question, what is the potential cost of what I say? Because of the Chinese diaspora, because of global concerns about China, because of China-Australia relations. Things can get taken out of context and be misconstrued easily. And used against you. And not just something you might have said recently. There is always this potential for words to be taken from anywhere and from any period of time, to then be weaponised in an orchestrated campaign.”

In such a loaded political and media environment, Chiu has to walk the line between being careful with his words and a greater need to be fearless and outspoken when it comes to what he believes in. He is being called back for one more set of ‘Addi Road meets Abbey Road’ photos at the crossing, signalling the end of our conversation. Chiu puts his still-pulsing phone into his pocket and picks up a #RacismNOTWelcome street sign off the ground beside him. It’s time to walk the talk again. And carry the message out into the world.