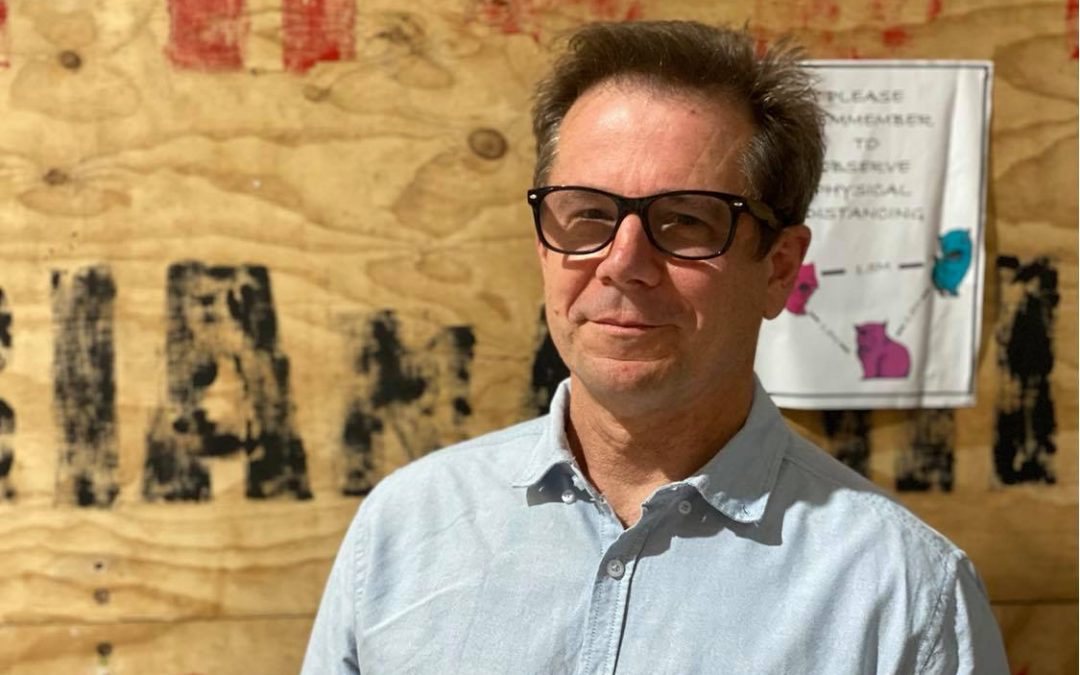 “I don’t want to be the rock ‘n’ roll guy anymore. I want to be the healer.” Bartley Melocco speaks like a man with a purpose. There’s a lot of pride and amusement around his past as a roadie and production rigger. But Bartley changed direction in life long ago and became an acupuncturist and health professional. How that rock ‘n’ roll vocation led him into becoming adept in oriental medicine and holistic treatments is quite a story. The biggest story of all, though, is how the year of Covid-19 brought those two loves together again.

On the weekend of Saturday 5th and Sunday 6th December, Bartley will be holding a major exhibition at Addi Road of rare and vintage music posters drawn from concert tours and events, large and small, dating back some forty years. The names and images on the posters tell their own tales: Midnight Oil, INXS, The Damned, The Beastie Boys, The Pogues, Iggy Pop …

But Bartley wanted to do more than show off his rock ‘n’ roll poster collection. He wanted the healing power of live music to flow again. He wanted bands to play in a big hall somewhere. He wanted DJs and food and good energy. More than that, he wanted to do something that would really help people during this difficult time. He turned to the Addison Road Community Organisation in Marrickville for help, offering to put his precious poster collection to good use, and ‘Open the Vault’ was born, a two-day music festival and vintage poster exhibition. 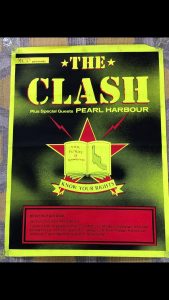 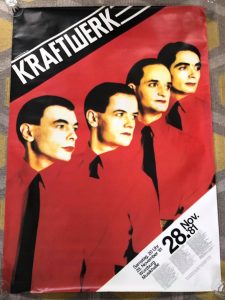 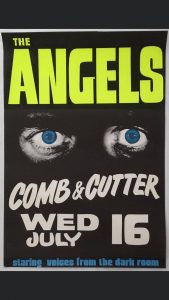 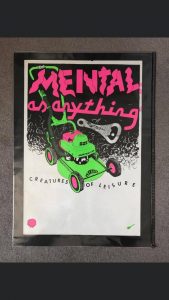 Open the Vault is the first music event of its kind in Sydney after a very hard year when so much has shut down and the arts and entertainment industries have been in crisis. It’s a calling-together of musical tribes and a celebration of community on many levels.

In the beginning, Bartley just wanted to do something for all those who work, unsung, in the background to make shows like these happen. Sevenways Healthcare Centre, his “integrative healthcare” business in Bondi had been forced to shut its doors or reduce its operations after Covid-19 hit. He’d started it eight years earlier with a team of “like-minded practitioners”: an osteopath, a women’s health physiotherapist, a massage therapist and reflexologist. They joined his centre while Bartley developed his knowledge of acupuncture, cupping, herbs and treatments. Restless to help even more, he began volunteering for outreach work, with a strong interest in troubled teenagers and what was happening at street level. Talking to Bartley, you can feel how much energy he has for the individual as well as a wider vision and commitment.

He nonetheless admits to “sitting around feeling sorry for myself. But I began to think about what I could do to change things. Where else I might contribute. Music has always been the medicine for me. I heard about roadies, especially down in Melbourne, committing suicide. I also saw Craig Foster’s Instagram posts about Addi Road and its food rescue and food security work, things like the Addi Road Food Pantry and the Food Relief Hub feeding people in need.”

“It lifted me out of my wallowing. I began to think about what I could do to help. I knew CrewCare were working with Support Act, who were running a 24-hour mental health line, and that they do things such as crisis relief, thing like helping to pay for emergency surgery for roadies when they really needed it. It’s such a tough life. The load in and load outs, the long drives to gigs in trucks. They stay in it too long and they get off their chops and eat terrible food. Sadly, once they break down, they’re just replaced. The show must go on. They give everything to it – but then there is an end and what happens to them? Covid-19 put a lot of people into that situation very suddenly. A lot of the crews haven’t had work since March. I’d been in the industry nearly 30 years. I knew I wanted to do something.”

He’d seen how acupuncture could help his own physical, mental and emotional health. “It felt so good. One day I had this epiphany after a session, and I realised “I am going to do this and help other people, especially people in my industry. That was sixteen years ago. I retrained and here I am: an acupuncturist and practitioner of oriental medicine!”

In his previous career, Bartley started in the punk music scene before working for a loading company that sent out crews for the likes of the Sunnyboys and Hoodoo Gurus, eventually stepping up and touring internationally as a production rigger with artists like Prince, Eminem and The Rolling Stones. In between all that, he’s worked on films like Mad Max and The Matrix as well. “Climbing,” he says. “You gotta be able to climb and not be afraid of heights.”

As a sideline, Bartley would keep posters from the tours he worked on and gather up many others as well, an interest that began way back in his teenage years when he’d follow bill posters around after gigs he’d gone to and souvenir their posters fresh off the street. “I’d just get them off the walls, take them home, dry them out and add them to my collection.”

In his career ‘crossover’ time he’d find himself showing Eminem pressure points before he went on stage: “Things he could do to calm down and deal with pissed-off feelings”. He’d help people around him with issues with sleep and anxiety; “More natural ways to feel chilled,” and “how to deal with turbulence and unrest”.

All these threads have come together at the heart of Bartley’s practice today and his vision for the Open the Vault. “I’m just so happy I can call on all the musicians I know, and work with Addi Road to support what they do for the community, and that all the money will go to Addi Road and CrewCare to keep doing the things they do at this time. Like I said, music is the medicine and it has always been a medicine for me. It’s a chance to give something back.”

Full event details for Open the Vault, a 2-day music festival and rock n roll poster exhibition happening on Saturday and Sunday, December 5th and 6th at Addi Road in Marrickville can be found here.

Details on how to donate to Addi Road’s food rescue and food security programs here. 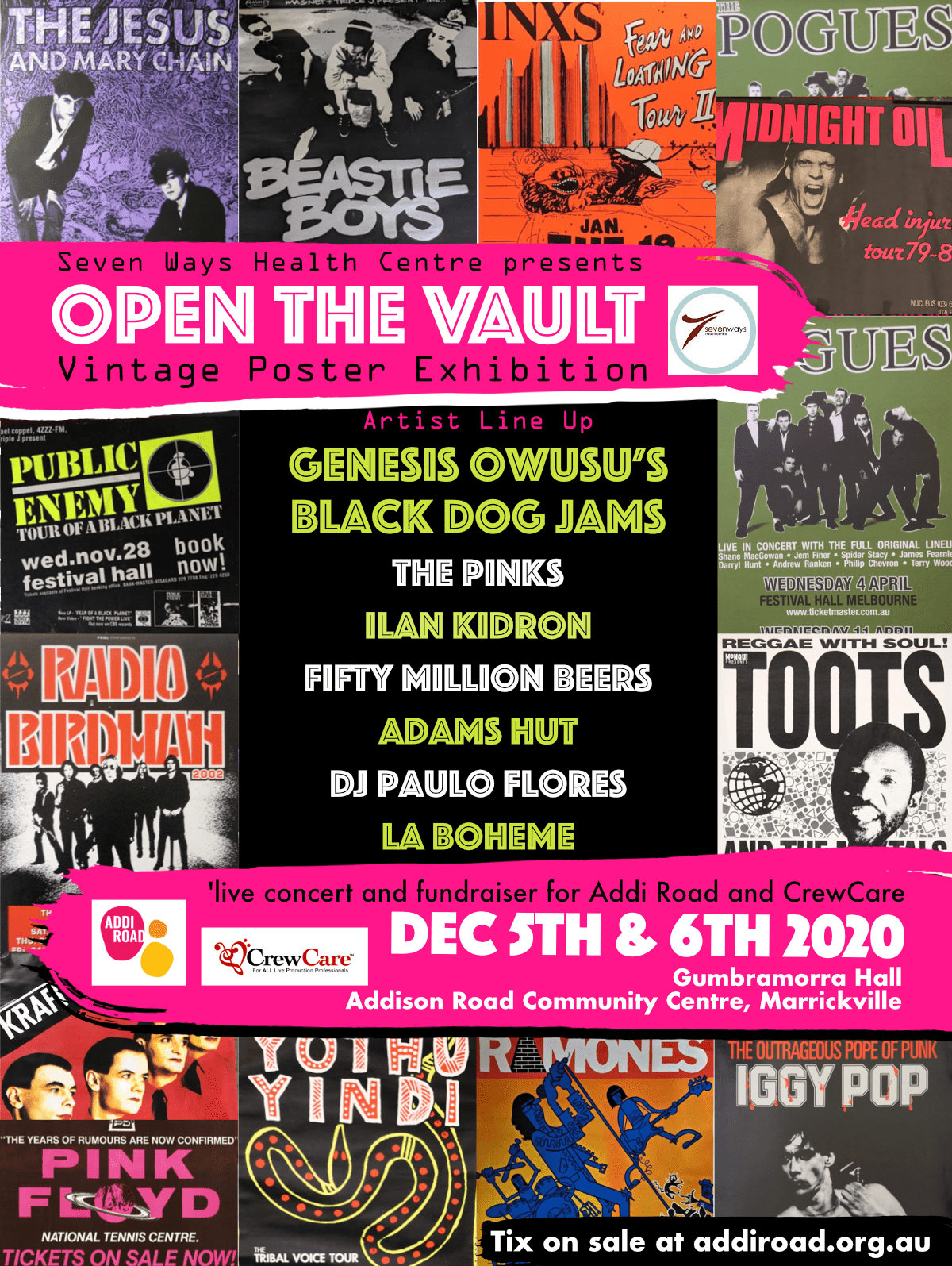