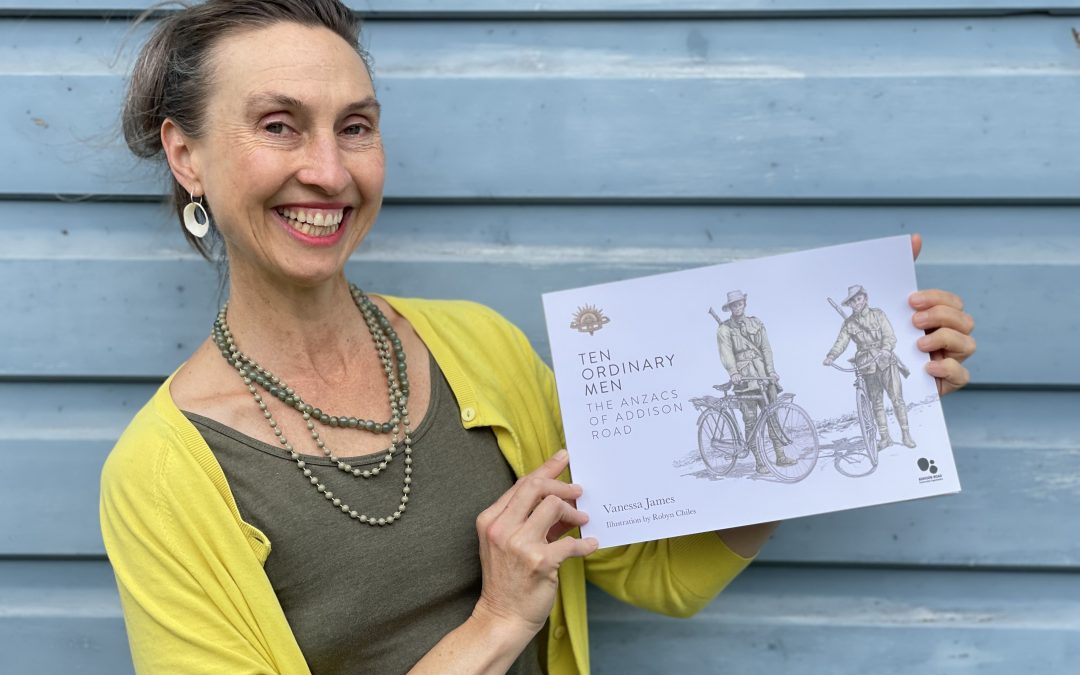 Mina Bui Jones lines herself up by the pale blue wall of an old building, holding up a book. The book is called Ten Ordinary Men – The ANZACs of Addison Road. As Addi Road’s Program Manager and the editor behind the project, she’s proud to see it emerge on Remembrance Day 2021.

For Mina, history is something that has to be continually fought for, not simplified and surrendered. There’s an obligation to get things right in all their depth and complexity, “otherwise it gets distorted and co-opted”.

She recognises a lot of people “might not care that much about the history in the book. I used to think that way about the ANZACs when I was younger… blah, not really interested! Now I appreciate how important it is to preserve these stories – and to not let what happened to these men be used to serve chauvinism. What does it mean to be a hero, after all? What happens when we call people heroes? The true human details get lost.”

Mina points to the book’s title Ten Ordinary Men. “That’s why we used the word ‘ordinary’. These were ordinary men who went through extraordinary experiences. But what makes them important is what makes them human. There is so much mythology and triumphalism around the ANZACs. So much hype. We forget they were part of the real world. All kinds of things happened to them, and they responded in all kinds of different ways.”

“World War One was such an epic story, an epic that still resonates. This little place is still connected to that huge event. Many of the buildings are from that time.

The back cover says it simply. “From 1916, in the middle of World War One, Addison Road Community Centre in Marrickville, Sydney, was a ‘place of enlistment’ for the Australian Imperial Forces. We know of 51 men who took oaths at Addison Road to ‘serve our Sovereign Lord the King’ and fight overseas. These are the war-time stories of ten of them, two of whom never returned.”

Ten Ordinary Men – The ANZACs of Addison Road was researched and written by Vanessa James. It would take a dull heart not to be moved by the stories she has unearthed and woven together, using the actual voices of the soldiers from their letters as well as archival details, documentary photos, maps and striking drawings by Robyn Chiles. “I think the hand-drawn illustrations in the book by Robyn are really special,” Mina says, pointing nearby to Robyn’s art studio, Drawn To Seeing. “Here she is today, based in a studio that was once an army hut, drawing images of soldiers who enlisted here for war here.”

“So many stories run through this place,” Mina says, gesturing again around the grounds of Addi Road. “It’s another thing I love about the book. World War One was such an epic story, an epic that still resonates. This little place is still connected to that huge event. Many of the buildings are from that time. And there is a feeling that connects to the history, that is very present here to this day – sometimes a sadness, but certainly a depth, a resonance.”

Ten Ordinary Men – The ANZACs of Addison Road was supported by a Saluting Their Service grant from the Department of Veterans’ Affairs. The first copy was gifted on Remembrance Day to Anthony Albanese, Federal Member for Grayndler, and a long-time champion of Addi Road and its heritage. Copies are available through our website for $30. 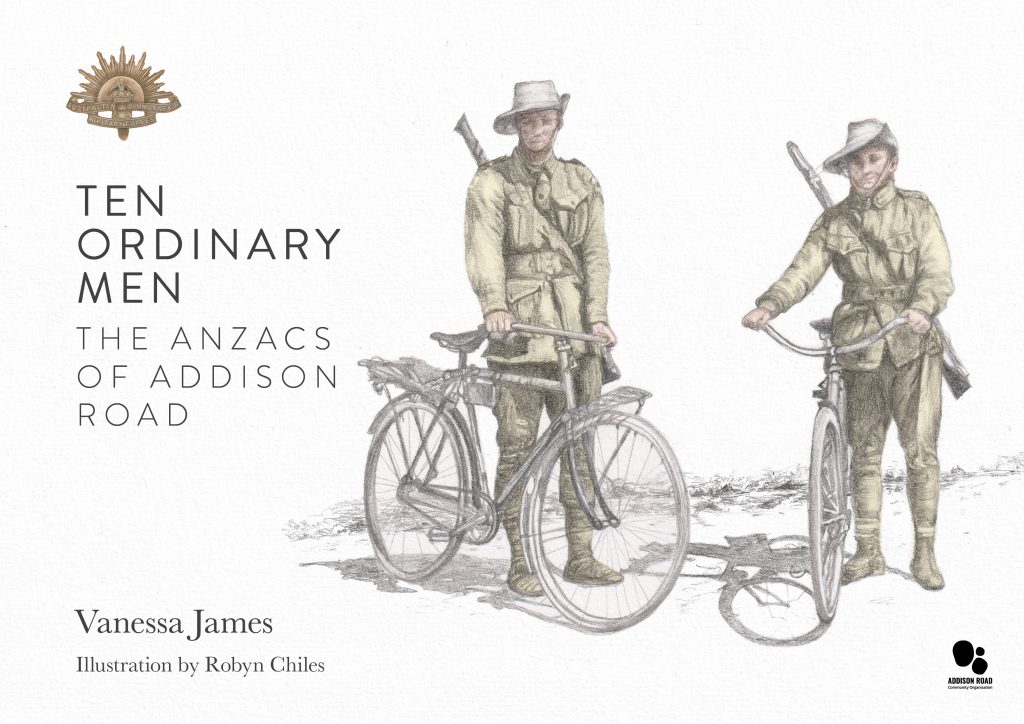