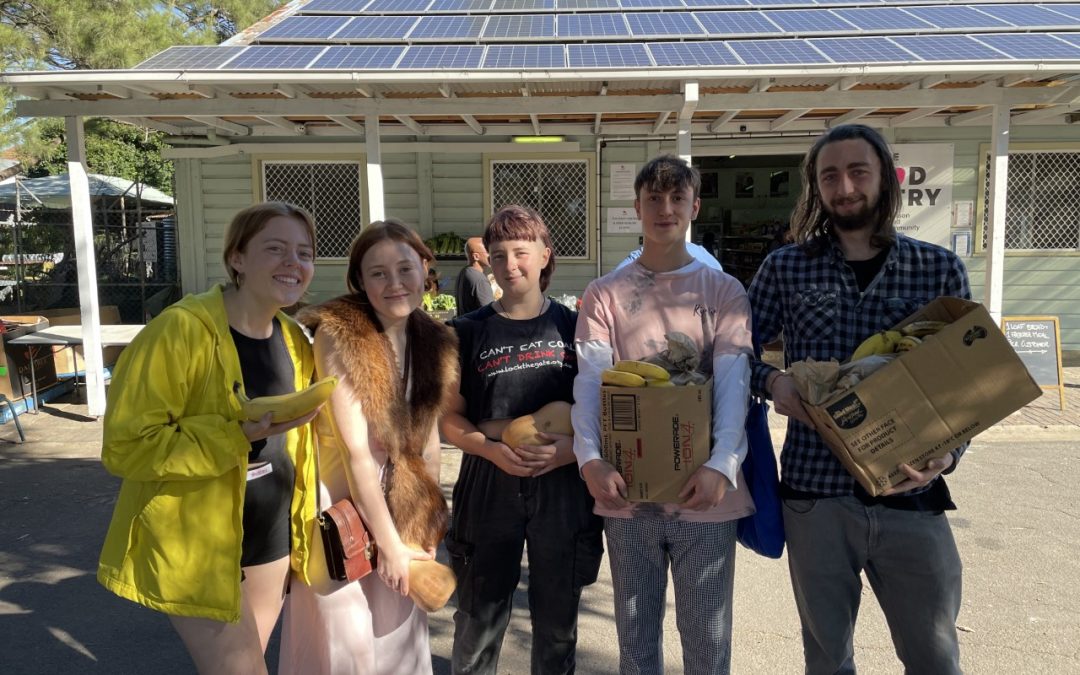 Emma, Sarah, Pokes, Will and Josh are down here again shopping at Addi Road Food Pantry Marrickville. Except for Sarah, who has come visiting her sister Emma, they all live in a big share-house in Newtown. “So we’re all practically family,” Josh says. The rest of the gang give him a big “awwwwwwwww’, then they burst out laughing.

Emma and Josh do most of the talking. It’s hard to explain how they all started sharing a place. Emma says “we just ended up together”. Josh reckons “it’s the house itself that brought us together”. Once they were all there, it became a real home. “Now look at us,” he jokes, “only one year on and we’re all shopping together.”

Josh likes what he calls “the freezer selection” at the Food Pantry. Pokes has an eye for “the fancy products. It’s like oh my god, I can afford to be luxurious”.

Bananas and pumpkins look to be pretty popular with them too. Emma explains the obsession. “We have smoothies every day. The house is smoothie crazy. That’s why we have got so many bananas”. Will is meanwhile planning to make a bread-and-butter pudding. Pokes is pleased. “Tonight?” She is planning a pumpkin dahl for everyone’s dinner. Sarah reckons she will make pumpkin soup as well, something that will last.

As you’d expect, they hold down all kinds of jobs and interests. Josh works at a bottle shop. He’s done the phone call centre thing and hated that. “Believe me, it’s a lot better in the shop.”

Pokes has a job at Gigi’s in Newtown. The fact it’s a pizzeria where you can get vegan pizzas – “very yummy” she says – seems to be a source of envy from everyone. Pokes also says she volunteers for Food Not Bombs and Forestever. Political and environmental concerns appear to loom large in her life, sparking an interest in how the Food Pantry operates through rescuing food and preventing waste.

Will proudly says he is studying leadership and management. Sarah shrugs and says she makes up and packs boxes for a vege co-op. She is also into sowing and fashion. He sister Emma is a bartender at a craft brewery. Emma mentions it like it’s nothing much, but she comes off like a leader whenever she speaks. All five of them have an energy that’s hard to miss. Like they’re just starting out and already going places. Making life up as they go along.

Asked for any new music tips, they start throwing out names: Will likes “Idles” and “Black Pumas”. Then they start thinking about a few local acts that people might like to know about. Pokes mentions “Spindles” from Marrickville; Josh names “Lola Sola”. Someone else says “The Marrakesh Club!”

Emma says they’ve had “some good parties at the house, a couple of raves”. It sounds like an understatement. They start picking up their boxes. Banana smoothies all round for everyone; and some Spindles and Lola Sola on a playlist while they cook up a storm at home on a Newtown afternoon.