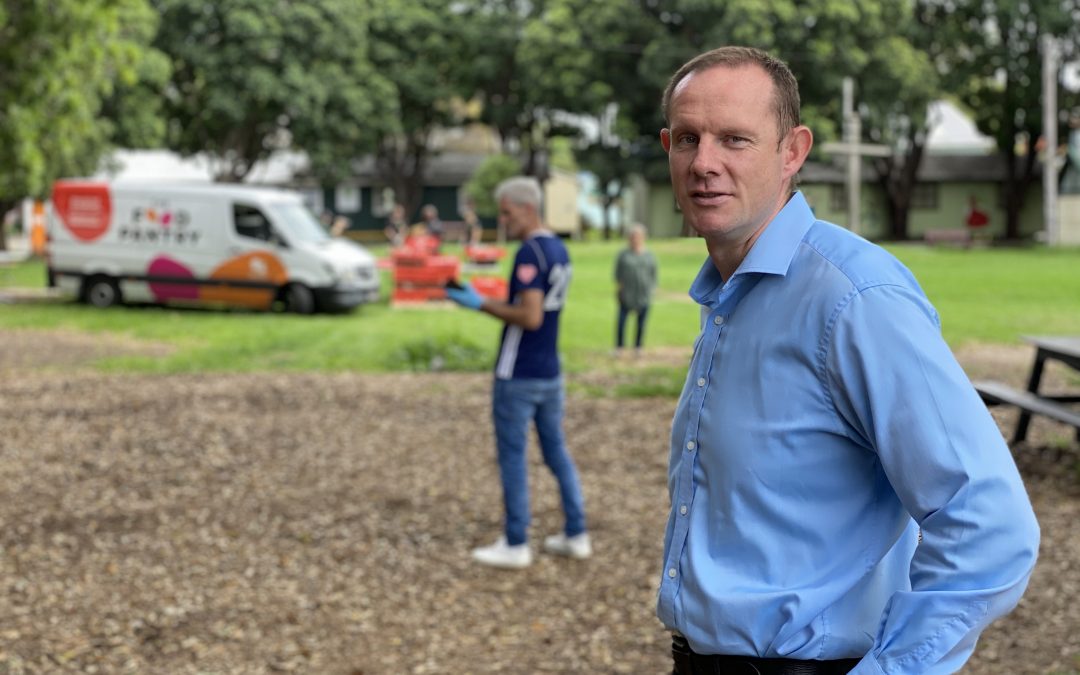 There’s no other way to put it. Darcy Byrne, the Mayor of Inner West Council in Sydney, says that “if it wasn’t for Addi Road all the major NGOs and charity organisations we work with would have run out of food two weeks ago.”

He is standing out front of Gumbramorra Hall, which the Addison Road Community Organisation have repurposed into an Emergency Food Preparedness and Response Centre for the city.

Located on site at Marrickville, it’s become a place where more and more charities and community groups are coming for help as they become overwhelmed by people in need and systemic collapse threatens them.

Darcy is deeply concerned by what is happening. He says “these problems of hunger, isolation, and poverty, have been with us for a long time.” Unfortunately, the COVID-19 crisis has only exposed the social rot that was allowed to go on.

He tries to be optimistic nonetheless. And says that “one of the good things happening is the new sense of solidarity and camaraderie that is occurring. You can see that with what’s happening here at Addi Road.”

Darcy also says that dealing with COVID-19 is “forcing a complete rethink of what government means at every level. You can’t keep scraping away all the funding and resources for years and years, and then be surprised when nothing’s there.”

He’s come down here to get a better understanding of what is going on and work out the next moves. It’s meanwhile taken a grassroots and independent community organisation like Addison Road Community Organisation to make the running, setting a new agenda for food relief in Sydney.

So much so, that what is happening at Addi Road has potential as a game-changing model nationally for the development of networked community food hubs that can support local charities and civil society groups in other municipalities.

Behind Darcy, that’s being put into practice as we speak. There’s a line of volunteers working with military precision, packing emergency food hampers for charity groups waiting in vans and cars. A hand-drawn map done by Addi Road CEO Rosanna Barbero just the night before has proved a god-send for the flow of the day. Everyone is made very aware of the need for social distancing as well as effective work practices.

The volunteers are from local sports clubs, marshalled into action by the footballer and SBS commentator CraigFoster, whose ingenious #PlayForLives campaign has tapped into the plethora of local sports clubs nationally to begin motivating their members to assist the charity groups in their communities.

It’s still early days for all this. But the need to organise and act fast is clear to everyone. Darcy speaks of all that is going on today with real enthusiasm. And he notes how there are all kinds of codes here from netball to football to golf to AFL, from young players to a few famous faces pitching in from the Sydney Swans.

“The sports clubs are an already organised network with a huge membership,” Darcy recognises. “They’re already engaged intensely with the community and they’re very used to collaborating to solve problems and get things done.”

The convergence of Craig Foster’s volunteer push with #PlayForLives, and Addi Road’s long running engagement with the food rescue and food security cause is paying off big time. More and more hampers are boxed up on tables and sent on their way.

Darcy isn’t just happy about Addi Road’s Emergency Food Preparedness and Response Centre, he’s grateful. It’s the start of a solution here to a very big problem. He walks around speaking to the volunteers and Addi Road staff. There’s only one thing to say, over and again: “You’re doing great work.”

You can make a financial donation to Addison Road Community Organisation here.